A Call for Activism Around the SDGs at WEF Africa 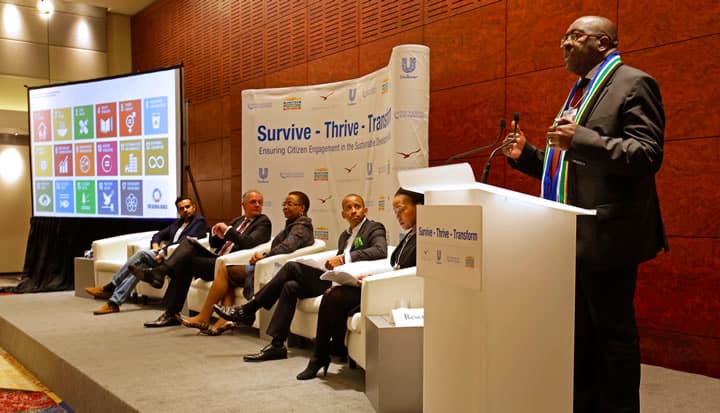 A Call for Activism Around the SDGs at WEF Africa


"The generations to come will never forgive us if we fail to take responsibility." This was the message shared passionately by Graça Machel during an event entitled Survive, Thrive, Transform: Ensuring Citizen Engagement in the Sustainable Development Goals held on Friday 5 June alongside side the WEF Africa Forum in Cape Town. Co-convened by the United Nations Foundation, the Graça Machel Trust, Unilever and Novamedia/United Postcode Lotteries and attended by close to 150 participants from diverse sectors, the event emphasised the central importance of broad ownership of the Post-2015 Sustainable Development Goals (SDGs), due to be adopted by UN member states in New York this September.

Minister Nhlanhla Nene, Minister of Finance of South Africa pointed out that the SDGs are fully aligned with Africa's challenges, and together with the Financing for Development agenda will support the advancement of Africa's Agenda 2063. Acknowledging the importance of collective responsibility, Minister Nene stated that "we will be able to achieve these goals if we all work together."

Paul Polman, CEO of Unilever, who previously served with Graça Machel on the UN Secretary General's High Level Panel on the Post-2015 Development Agenda recalled the enormous amount of feedback received from the High Level Panel consultations. Companies representing some 10% of global GDP participated in consultations, with the principal questions asked of them being “what are you going to do, how can you adopt your business model?”

"We have to transform the business discussion," affirmed Mr Polman, "from short term shareholder reporting to broader stakeholder accountability." Pointing out the example of the Tropical Forest Alliance where companies refused to sell un-certified products and thus forced new, progressive policy frameworks from governments, Mr Polman called on the business sector not to simply comply with safeguards but to "step up and help to de-risk the political process" Business will not adopt all 17 SDGs, he added, but can choose specific projects in concrete areas such as health, agriculture, sanitation, or whatever is of relevance to their business, to make selected SDG targets come alive, with a view to turning potential threats into business opportunities. Mr Polman also reference Project Everyone, the initiative spearheaded by filmmaker Richard Curtis, which aims to make the SDGs known to all 7 billion of the world’s population..

Mrs Machel reminded the audience to remember the implications of the word “sustainable", stating "this implies a sustained investment for the future in financial and human capacity towards building healthy, strong, productive and fulfilled societies”. The concept of "leave no one behind" in the SDGs is a departure from the MDGs she added, which takes everyone into account and requires a different form of planning. Using the example of the UN Secretary General's multi-stakeholder movement Every Woman Every Child, Mrs Machel noted that in the SDGs we have gone from talking about reducing preventable deaths to saying that no woman must die at birth from preventable deaths, every child must be able to survive as well as thrive, and our development agenda must allow all adolescents to reach their full potential. In Africa, where no country is likely to achieve all the MDGs we are particularly challenged, she said, pointing out the shocking information that the average age is 17 in over 30 countries on the continent. Ensuring that all these youth have fulfilled futures will require an enormous investment that will require all stakeholders to come together in a social pact; in short, a movement where we change the way we do business and in which all citizens take the initiative in engaging governments at all levels. Her message explicitly echoed Mr Polman’s - don't wait for governments to tell you, take action yourself.

Having worked on two platforms created expressly with the intention of enlisting business and other stakeholders in contributing to the MDGs this is a refreshing and even historic approach. Both platforms in question were created well into the MDG implementation period, the first in 2008 and the second in 2010. This time it's clear that business is not waiting, either for the SDGs to be adopted or for the UN to call upon the private sector, before pro-actively taking action.

As Ashish Thakar, CEO of Mara and another speaker at the event put it, "private sector must take ownership." He urged business to use the opportunities that exist, such as the fact that Africa has 80% mobile penetration, and to support grassroots initiatives and empower SMEs and entrepreneurs. Niclas Kjellström-Matseke, CEO of Novamedia/United Postcode Lotteries called in particular on the media to create accountability for the SDGs across government and society and backed up his call with the announcement later that day of a funding partnership with the UN Foundation and Thompson Reuters Foundation to train journalists around the world on the SDGs.

Underpinning this movement of citizen engagement is data, statistics, information. Speakers emphasised the importance of setting high standards and being able to measure progress. If we have the data, Ms Machel underlined, we can define not just our roles but also our responsibilities. This implies a significant paradigm shift from the state-centred approach taken towards MDG achievement. This time, it’s clear that success and accountability will rely on everyone standing up to take action.

As Nelson Mandela would have said, "It's in your hands."