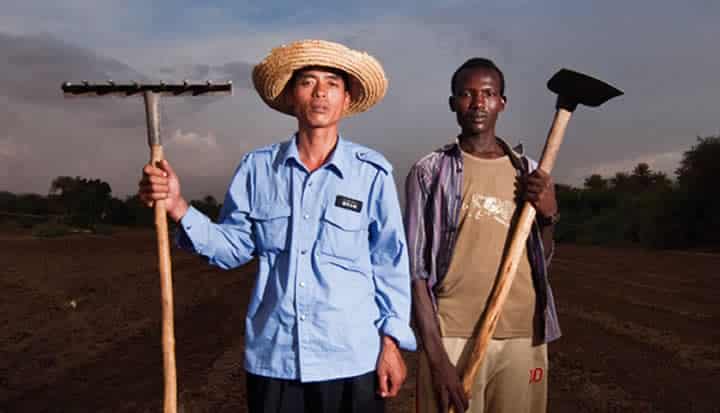 Click here for more stories about
Trade
Tuesday May 7 2013


As I write this, the ever-growing dominance of China is often in the news – and not always in a good way.

From Australia, the former Prime Minister, Kevin Rudd, writes in the New Statesman that ‘for the first time since George III, a non-western, non-democratic state will be the largest economy in the world. If this is the case, how will China exercise its power in the future international order? Will it accept the culture, norms and structure of the postwar order? Or will China seek to change it? I believe this is the single core question for the first half of the 21st century, not just for Asia, but for the world.’

In the Financial Times, Lamido Sanusi, Governor of the Central Bank of Nigeria, complains that Africa is ‘willingly opening itself up to a new form of imperialism’, in which China imports commodities in exchange for manufactured goods. China, he says, is a ‘significant contributor to Africa’s deindustrialisation and underdevelopment’: ‘Nigeria, a country with a large domestic market of more than 160m people, spends huge resources importing consumer goods from China that should be produced locally. We buy textiles, fabric, leather goods, tomato paste, starch, furniture, electronics, building materials and plastic goods.’ ‘The Chinese, on the other hand, buy Nigeria’s crude oil. In much of Africa, they have set up huge mining operations. They have also built infrastructure. But, with exceptions, they have done so using equipment and labour imported from home, without transferring skills to local communities.’

Also in the FT, Robert Zoellick, former President of the World Bank, without naming China explicitly, calls for the WTO to act on fair-dealing by state-owned enterprises, ‘so that private businesses can compete fairly with state capitalism’ - in financial services, telecommunications, steel, chemicals and energy, and other natural resources.’

The elements of an argument are to be found in these quotes – and are brought together and fleshed out in Cardenal and Araujo’s book, ‘China’s Silent Army: The Pioneers, Traders, Fixers and Workers Who Are Remaking the World in Beijing's Image’. As might be inferred from the title, this is not necessarily a favourable account. Indeed, Cardenal and Araujo (henceforth CA) go so far as to describe China as an ‘autocratic superpower without any interference from the usual counterweights which might otherwise submit world conquest to international scrutiny’. They are journalists, it has to be said, never short of an attention-grabbing phrase – but they are also well-travelled and well-informed. Their case material comes from China itself (they live in Beijing) and from site visits in such widely-scattered countries as Russia, Kazakhstan, Turkmenistan, Burma, Laos, India, Iran, Venezuela, Peru, Ecuador, Egypt, Angola, DRC, Sudan and Mozambique. Their arguments are not, I would say, easily dismissed. CA argue:

First, China’s engagement in the developing world has to be thought of as a deliberate ‘project’, to guarantee food and energy security, as well as supplies of essential raw materials to fuel China’s growth, and to project power globally. It is led by a ‘triumvirate, formed by the party-state, the banks and the state-owned businesses’.

Third, the project is supported by the ‘silent army’ of workers on construction projects, but more especially business people and other long-term migrants, bound by strong ties of kinship, to each other and to their home communities in China.

Fifth, the problems are greatly exacerbated by the lack of accountability mechanisms inside China itself, including an active civil society.

The accumulation of case material is impressive. CA tell us more than we need to know about the rickety airlines and potholed roads that have carried them around the world, and about the snakes, mosquitoes and corrupt border guards. Nevertheless, the fact is that they have talked to both Chinese and indigenous construction workers, to policy-makers and businesspeople, to journalists and to civil society activists: more than 500 interviews in all. We join the shanta sini, Chinese women selling clothes door to door in the tenements of Cairo. We meet successful and well-connected Chinese emigrants in places like Buenos Aires, Caracas and Kinshasa. We talk to uninformative representatives of state-owned finance houses and enterprises, like the China Export Import Bank or the China National Petroleum Corporation. And we observe at first hand the scale and impact of Chinese investment, whether at the Meroe dam in Sudan, the iron mining town of San Juan de Marcona in Peru, or the casino at the Royal Hotel in Boten in Laos.

Some of the material has a familiar ring, in the sense that there have been other accounts of, for example, Chinese state companies, backed by state finance, taking on natural resource or construction projects, with their own labour, and largely for export to China. Other material is less familiar: for example, the extent to which Chinese retail businesses selling Chinese products have captured markets, in locations as diverse as Dakar, Vladivostok, Dubai and Almaty. Can there really be 4000 Chinese shops at the Dragon Market in Dubai? Also, the accounts of how Chinese networks operate, for example with those shop owners in Dubai stocking the shelves with products from their own family-run businesses at home: relationships, guanxi, are powerful in Chinese business culture.

Does the argument hold up? And in particular, does it hold up in a comparative sense? We know China is bigger than the rest of us. But is it also ‘worse’, for partner countries or for the world? There is plenty written about the best business standards, contributions to development and ‘inclusive business’ – see, for example, my commentary on Justine Greening’s speech on the subject – but the best may not be representative.

Certainly, other countries apart from China have a legitimate concern for food and energy security, and raw material imports, and some even try to project global power, including in their trade relations. Many offer state-backed lines of credit, or offer export credit guarantees. Many also support trade through their diplomatic service – the UK being no exception in this regard, as William Hague, the UK Foreign Secretary, emphasised in his keynote speech on the role of the Foreign Office, in September 2011:

‘We are equipping our diplomats with sharper economic skills, so that they not only understand the economic forces shaping the world around us but have the specialist knowledge to spot commercial opportunities, lobby to drive down barriers to trade and build the political relationships that support greater trade and investment in the UK.’

I expect that William Hague would be all in favour of long term supply contracts on favourable terms, Chinese-style, given half a chance. And he might be enthusiastic about the opportunity to send large numbers of unemployed UK workers to build railways, dams or sports stadia in other countries! Anyway, if that had been a Chinese Minister, then probably CA would have placed the quote on the front cover. The difference between China and the West might well be scale, central control, and the relative paucity of state-owned companies, what CA describe as the ‘firepower of state capitalism’. Still, think of ElfAquitaine, in which the French Government held a stake.

Do developed countries handle contracts more openly, and are they more respectful of international law? Maybe. Sometimes. It is not hard to think of recent cases where contracts have been open to question. Tim Lankester’s book on the Pergau Dam scandal is instructive in this respect, detailing a secret annex promising aid in return for a large defence contract. The Al-Yamamah arms deal with Saudi Arabia also comes to mind, with Tony Blair, as Prime Minister, closing down an enquiry by the Serious Fraud office. There has also been recent discussion of how the tax affairs of multinationals are handled – notably the critical tax justice work of Action Aid. And as to sanctions busting: the Iraqi super-gun?

Similar points could be made about environmental and labour standards, and disregard for human rights. The deforestation around the jade mines of Northern Burma sounds horrendous, but then so does the deforestation in many countries of SouthEast Asia, often associated with Japanese investment. What about the impact on the Amazon of US investment in cattle ranching in Brazil?

And finally, on deindustrialisation, there are certainly cases where developed country exports have made it difficult for developing countries to sustain or develop their own manufactures, and not just in nineteenth-century India.

It is tempting to say, then, that what we have here is ‘six of one or half a dozen of the other’. Or, as Jesus observed in the Sermon on the Mount: ‘Judge not, that ye be not judged. . . . And why beholdest thou the mote that is in thy brother's eye, but considerest not the beam that is in thine own eye?’.

That is probably too generous to China, largely because of the fifth pillar in the CA argument, that China is unconstrained by civil society and in general less accountable. It can therefore get away with more, and improve more slowly. That certainly rings true. Some of the excesses catalogued in CA’s book would be less likely to take place under contemporary conditions facing Western companies. The Pergau Dam scandal would be less likely to happen today, for example, because the the UK has abandoned tied aid, and because the Aid and Trade Provision, which did not finance Pergau, but did finance other similar schemes,has been abolished. Similarly, multinationals are influenced, if not governed, by the OECD Guidelines for Multinational Companies. And there are many normative, and sometimes legislative standards governing environmental and labour performance – see for example the UN Global Compact or the Equator Principles.

Does China adhere to these? Not yet, but it might. CA make the important point that China’s behaviour overseas is not that different to its behaviour internally – and that change internally, for example driven by concern for the environment, might also impact externally. Kevin Rudd, in his New Statesman article, suggests that ‘it remains an open question . . . whether China will democratise and whether it will in time respect relevant international covenants . . . If we in the west can continue to work with liberalising elements within the Chinese system – to cause the country’s leadership to conclude that their people’s long-term interests lie within the current liberal, rules-based order, one that has served the international community reasonably well since the carnage of the Second World War – then we can succeed.’

Developing countries themselves also need to act, including via active industrial policy. Sometimes they simply roll over, either because they are genuinely enthusiastic about China’s contribution to their development, or, CA argue, because they have been corrupted. Sometimes, though, they stand up for the ‘liberal rules-based order’, modifying contracts, or refusing to grant tax concessions or accept large-scale immigration: CA cite Costa Rica, Ecuador and Zambia in this group.

This article was first published on Simon Maxwell's blog and is reproduced here with permission.

China’s Silent Army: The Pioneers, Traders, Fixers and Workers Who are Remaking the World in Beijing’s Image Juan Pablo Cardenal and Heriberto Araújo