Bringing Your Company’s Values to Life 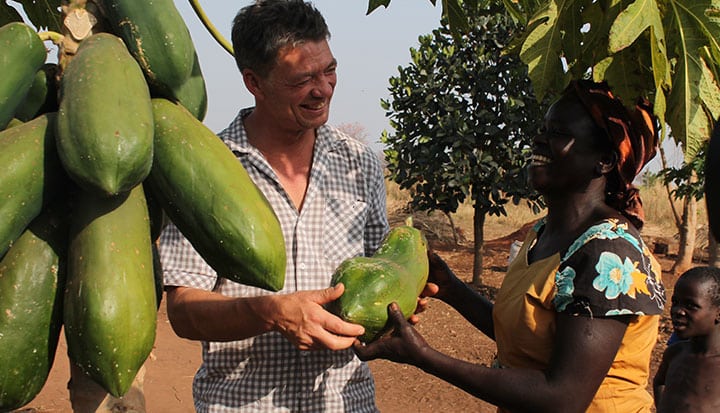 Bringing Your Company’s Values to Life


I have been farming organically at Riverford since 1987. The concept of combining good food, good farming and good business was inherited from my father and is at the heart of everything we do.

In the 1990s, as my skills improved at home, I wanted to disprove the naysayers who claimed organic farming was a phenomenon of the rich and so I set my sights on sub-Saharan Africa, taking a four week trip that would change my outlook forever.

Travelling around Kenya visiting smallholder farmers and training institutes, I had become disheartened after seeing apparent misuse of aid and a lack of practical demonstration of sustainable agricultural techniques. It was only when I entered Uganda that my view began to change. I visited small, striking farms that were employing forward-thinking practices. Farmers were growing a diverse range of crops in multiple canopies, composting, conserving water and improving their soils rather than the monocultures I had seen previously or the traditional slash and burn temporary cropping.

Looking around these farms I realised the true power of small-scale farming and its potential to feed the world. This level of productivity was achieved not by the use of machinery and chemicals, but through quality training and understanding in organic, sustainable agriculture. Who was behind this work? Send a Cow, an international development charity firmly rooted in Africa. It currently works in seven countries in the continent and was founded by West Country dairy farmers not far from my Riverford farm in Devon.

The more I learnt about Send a Cow, the more I could see Riverford’s own values looking back at me. It was clear that we were two organisations in sync.

Rather than asking farmers what they need, the charity asks them what they have. On first glance, many smallholder African farmers look out to their small field of maize and see nothing more. But with support, training and guidance, Send a Cow begins to highlight countless opportunities in their backyards.

Land that farmers once thought useless is utilised by building keyhole gardens – simple constructions which use waste water and materials to grow vegetables like kale and broccoli all year round. Farms which once held one staple crop, are diversified. This approach enables families to: access a much wider, more nutritious diet; spread the risk of crop failure; produce a range of vegetables that can be harvested all year round, and avoid encroaching on forested land to grow more food.

The results speak for themselves. After Send a Cow training, 97% of families are able to provide enough food for their families and through the sale of their surplus produce, families see their household income increase six-fold. It’s good farming, good food and good business at its finest.

The entire approach is organic and sustainable. It’s not just because fertilisers and chemical pesticides are expensive and usually out of reach for the poor farmers they’re working with, but because Send a Cow has a deep-seated respect for land and resources, something we share at Riverford.

Farmers are taught techniques such as how to utilise animal urine for pesticides, make ‘plant tea’ for fertilizers and implement push-pull farming (an innovative technique for controlling pests) alongside learning the benefits of soil conservation and agroforestry. It requires knowledge rather than imported inputs and is life-changing for a growing number of families. A recent study in Ethiopia found that before working with the charity, none of the farmers were implementing soil conservation techniques or fertility building; this increased to 93% after training.

Needless to say, I was sold. After my first visit in 1999 I invested £10,000 into a Send a Cow training centre. I reckon it was the best £10,000 I have ever spent. Between 2012-2015, Riverford raised £75,000 to support Send a Cow’s work in Northern Uganda. Since then we have developed a long-standing, mutually beneficial relationship. Not only have Riverford and its customers enabled smallholder farmers in Africa to realise their own futures through farming, but working with Send a Cow has enabled us to extend and live our values beyond the corporate realm.

And it’s not just me who’s seen the difference. In 2014, I took two of my Riverford employees to see the work first-hand, to be inspired and to see our values being lived for themselves.

Riverford employs 600 people; becoming a destination employer where people really want to work is incredibly important, especially with the new generation who tend to be quite idealistic and want to identify with your outlook and feel they are contributing to the world. Establishing a strong charity partnership with shared values helps to attract like-minded people to the business, ensuring the continuation and even strengthening of your company’s culture and values.

One response to “Bringing Your Company’s Values to Life”