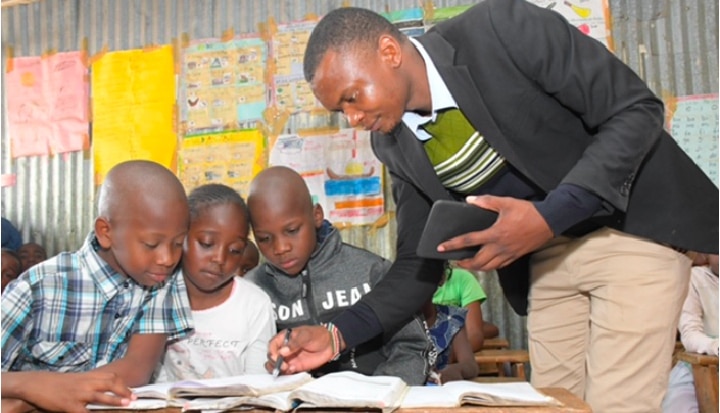 An independent study led by a Nobel Prize-winning economist has confirmed some of the largest learning gains ever measured. The methods studied underpin the education of more than one million students supported by NewGlobe in classrooms every day, across Nigeria, Liberia, Rwanda, Kenya, Uganda and India.

A Nobel Prize-winning economist has confirmed among the largest learning gains ever measured by a major study in international education.

The groundbreaking study, led by Professor Michael Kremer, the 2019 Nobel Prize-winning economist, suggests that children living in underserved communities receive 53% more learning in NewGlobe-supported schools over the course of their early childhood and primary school careers.

If replicated at scale across public education systems, the gains would be enough to put African children from underserved communities on track to match their peers in countries with incomes three or four times higher.

Primary students through Grade 8, gain almost an additional year of learning (0.89) under the NewGlobe integrated methodology, learning in two years what their peers learn in nearly three.

For the critical early childhood development (ECD) years, the gains are even bigger. Those students supported by NewGlobe gained almost an additional year and half of learning (1.48), learning in two years what students in other schools learn in three and a half years.

The study explains that:

“The test score effects in this study are among the largest observed in the international education literature, particularly for a program that was already operating at scale.”

The study also finds children taught using NewGlobe’s methods are more than three times more likely to be able to read a sentence by the time they are in first grade, relative to their peers in other schools.

Students starting with the lowest learning levels gained the most, with girls making the same leap in learning as boys. It contrasts with research which shows girls in Sub-Saharan Africa are consistently disadvantaged in learning.

The findings come at a critical time. Jaime Saavedra, the World Bank’s Education Director, has called the current state of global learning “The most serious crisis in education in 100 years.”

The reason is clear. Even before the impact of the covid pandemic, there was considerable evidence that millions of children in formal education were not learning. Prolonged school closures have made that even worse. The Bank’s own estimate is that up to 70% of 10-year-olds in low and middle income countries could be in “learning poverty” - defined as being unable to read and understand a simple text - as a result.

The results of the Kremer et al study are a resounding affirmation of NewGlobe’s integrated learning system - the same one it employs across Africa and South Asia in support of more than a million children today and increasing every year.

The two-year study is the result of a large-scale randomized control trial (RCT), including more than 10,000 students from low socioeconomic backgrounds.

The results are by far the most authoritative on the use of the model pioneered by NewGlobe, which includes individual - and ongoing - training and coaching for all teachers, use of a digital learning platform with real time data analysis, teaching guides grounded in scientifically-based pedagogy, and a 360°support system.

2019 Nobel Prize Laureate, Professor Michael Kremer said: “This study shows that attending schools delivering highly standardized education has the potential to produce dramatic learning gains at scale, suggesting that policymakers may wish to explore incorporation of standardization, including standardized lesson plans and teacher feedback and monitoring, in their own systems.”

NewGlobe CEO, Jay Kimmelman said: ”Tackling learning poverty is one of the most urgent challenges of our generation. Innovative education solutions that are proven to be effective at scale will define the prosperity, growth and security of our global future.

“NewGlobe is delighted that an independent study of this size led by a Nobel-prize winning economist has found unequivocal evidence of the unrivaled learning gains delivered by NewGlobe’s holistic approach to teaching and learning.

“Visionary Governments are leading transformations of their public education systems using the data-driven scientific learning model supported by NewGlobe. These findings are incontrovertible evidence that the system underpinning these government-led education programs has the potential to deliver educational improvements for children significant enough to dramatically improve the economy as these children move into adulthood.”

The World Bank, UNESCO and Unicef have all called on political leaders to prioritize post-Covid education recovery by focussing on proven solutions and putting more emphasis on improving learning outcomes.

The study by Professor Kremer and his co-authors offers a clear means of doing that, and a way to lift children out of the grip of learning poverty, based on solutions proven in the Global South.