Boda Boda, Economic Development and the Future of Work 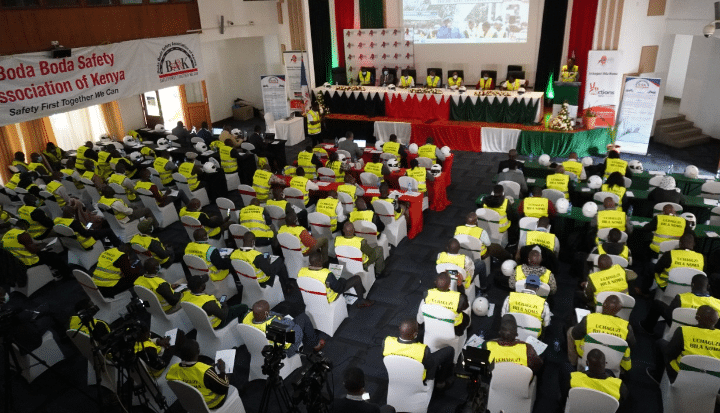 The BodaBoda Safety Association of Kenya (B.A.K) currently has 1.4 million registered members. 1.2 million of these are between the ages of 18-35. As an association, our entire membership base is made up of small business owners. We are developing a framework to effectively upskill and reskill for the future of work.


The term BodaBoda originated from Busia County, Kenya in the late 80s. It was used to refer to bicycle taxis that drove passengers and light luggage across the border town of Malaba. The cyclists of these taxis would shout, “Border!Border!Border…...” to attract those that were heading towards the Ugandan border. Thus the adoption of the name BodaBoda.

The Making of the BodaBoda Business

In Kenya, in 2002, a wind of change was sweeping across the Nation in its entirety. The globe had ushered in a new millennium and the Kenyan masses demanded that the new decade was to be chartered by a new political promise. They unanimously elected former President Mwai Kibaki, an economist, to take charge of forging a new economic path for the country. During his first term, he removed and reduced taxes and levies on motorbikes. This eliminated the cost barrier of entry that had hindered the uptake of motorcycles for commercial use. By 2007 the number of registered motorbikes was 100,000. This number was estimated to be at 1.5 million in 2018 and is expected to grow to 10 million by 2030.

The BodaBoda Safety Association of Kenya (B.A.K) currently has 1.4 million registered members. 1.2 million of these are between the ages of 18-35. On a daily basis the industry collectively rakes in about Ksh 980 million or $ 9.8 million. This is using the average daily earnings of ksh 700 or $7 per Bodaboda. Annually the sector brings in about Ksh 350 Billion or $3.1 Billion. As disruption continues to demand for the reinvention of brick and mortar market systems. The dynamics of how markets are adapting and responding to these demands vary as they cut across the entire market fabric. The developing economies, particularly those on the African continent, find themselves wielding the unfair or fair advantage of leapfrogging. This then benefits from the anchor of a youthful population.

The Future of Work

According to a report published by the Mo Ibrahim Foundation, as of  2020, Africa became the youngest population in the world. The report further indicated that currently, 60% of Africa's population is below the age of 25. By 2100, the continent should still have the youngest population globally. Young people however, are most exposed to the risk of unemployment. The nexus between economic growth and the future of work holds within itself the promise of economic prosperity. While still in the development phase, entire economies can easily pivot and adapt to future markets. This phenomenon has been witnessed in the economic cases of Singapore, Luxembourg, the United Arab Emirates among others.

To successfully achieve economic development milestones, the mismatch between education provisions and the skill demands of the job market has got to be bridged. The Human Capital development efforts need to be directed towards the creation and proper implementation of skill transformation programs. According to a report published by McKinsey on the future of work, more than 100 million workers in the eight countries they studied may need to switch occupations by 2030. This is due to shifts in the labour market models influenced by technological transformation. Africa's labour market will get an annual injection of 30 million new workers until 2030. Economies  on the continent are already facing the enormous burden of high unemployment. This will  further escalate the urgency for African economies to create new and sustainable jobs.

A new wave of digitization and automation continues to sweep across industries, mounted on the wings of the automation revolution.  This will greatly affect employment as millions of jobs will change. In order to prepare for the future of work, businesses have to engineer and implement upskilling or reskilling programs. MSMEs are a crucial element for the future of work. This is because they are responsible for more than two thirds of all the jobs globally, while still accounting for the majority of the new jobs created. MSMEs may lack the capacity to adequately prepare for the future of work due to the challenge of lack of resources.

As an association, our entire membership base is made up of small business owners. Thus, we are developing a framework to effectively upskill and reskill for the future of work. We are anchoring these programs on a human-centred agenda. Through a particular focus on human, technical and digital skills, that will dominate the top skills for 2025 as outlined by the World Economic Forum. Our primary aim is to build capacities so that they can innovate around the current business models used by the industry. The urgency to reimagine how business should be carried out aware of the imminent threat of global warming is very apparent. To reign this in, a concerted effort will be required on our part as the business community, especially MSMEs to go green.

Our members continue to greatly benefit from the innovations modelled around the industry’s core business model. This is through companies and corporations working to create more value for consumers while still greatly supporting the BodaBoda sector. Among these are ride hailing providers like Uber, Bolt, SafeBoda among others. Under the Stewardship of the Association’s National chairman and Founder Mr. Kevin Mubadi. We continue to work closely with entrepreneurs and innovators through strategic alliances to address some of the major challenges our community faces. We have recently partnered with Oye Platform Solutions, a technology company that provides zero cost insurance cover to our members through a solution called Oye. Our mandate remains that of availing necessary resources to our members giving them the key to channel disruption into positive change, in whatever eloquence their hearts may call upon.

We continue to seek partnerships with various stakeholders globally. These partnerships are geared towards the development and implementation of diverse programmes housed under the association. Especially those with a particular focus on the economic development and social welfare of our members. We continue to explore potential areas of synergy as well as opportunities for buy-ins from institutions of higher learning to offer basic certification courses, NGOs and other institutions that have entrepreneurship programs, accelerators and business incubators to incubate other MSMEs ideas that our members are working on. As we all converge our efforts in a bid to eliminate artificial barriers to fulfilment and achievement, in pursuit of the SDGs. We continue to be guided by the north star of collaboration to promote innovation and sustainable development.