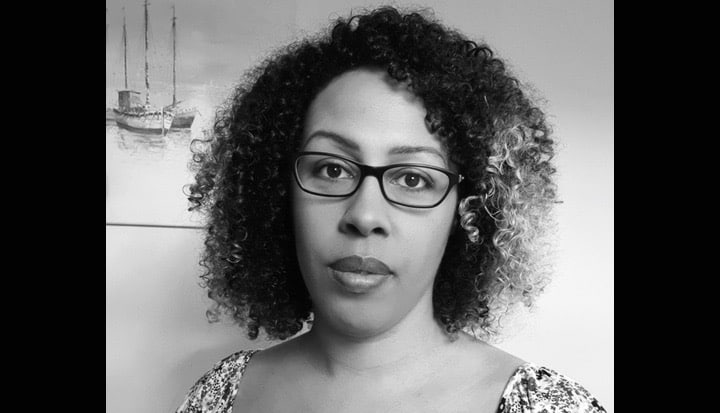 Members of the Business Fights Poverty network share their reflections on Black Lives Matter in this series. Today we hear from Naomi Cameron-Wyatt.

NCM: I am mixed, white British/black Caribbean, in my 30s, working in the cyber security industry and I live in the South East of England with my ten-year-old son. I am very aware of certain privileges awarded to me due to my upbringing in a white family, but equally, I am often made to feel that the darkness of my skin is a detriment to my character and to my worth.

BFP: What is your personal take on the actions surrounding Black Lives Matter triggered by the death of George Floyd?

NCM: I’ve had uncomfortable conversations with friends, colleagues and my own white family members this week. My aim is to give them the tools to stand up for me and for all people of colour they encounter when the situation arises.

Following the news of George Floyd’s death, I felt disappointed that my white friends were surprised at the brutality and shocked that a racially motivated incident like that would happen today. The overwhelming flood of information surrounding Black Lives Matter on social media is disturbing and kept me awake into the night this week. I have tried to focus on the educational posts that suggest which books to read, which creators to follow, which programmes to watch and which black businesses to buy from, but it is difficult to avoid some of the deeply troubling footage of riots, police brutality, elevated emotions and death.

I was pleasantly surprised at the open support of the #BlackOutTuesday initiative online by many people and organisations. I was touched by the celebrities protesting, and particularly inspired by John Boyega speaking out at Hyde Park on the 3rd June. Those powerful images of him echoing the black-gloved salute made by medallists, Tommie Smith and John Carlos at the 1968 Olympics is a stark reminder that we have failed in our growth as a society in the last 50 years.

BFP: What does this mean with a backdrop of COVID-19?

NCM: COVID-19 has ripped through the globe and altered our routines and the total deaths in the UK has now broken the 40,000 mark. As well as the heightened emotions in what is already a difficult period for most, lockdown conditions have given some white people a taste of the difficulties many black people in poorer communities suffer through in normal life i.e. lack of childcare, access to decent education, furloughed from jobs. Lockdown has given us more empathy and connection to each other, and in some ways, I believe this has contributed to the traction of the BLM movement.

Organisers of the UK protests have been handing out protective equipment, asking for safe social distancing measures and asking people to self-isolate for two weeks afterwards. The Black, Asian and minority communities have the highest COVID-19 death-rate, so you would ask, “Why protest if you’re putting your life at risk?” Throughout history human rights activists have put themselves in harm’s way for the cause. I have the privilege of finding ways to contribute to the movement online.  However, I do understand those who are tired of the years of oppression and injustice and would rather risk being outside with others in solidarity to demonstrate and be heard together. It shows that people are at the end of their patience of black people dying unjustly for 400 years, and now is the time to be part of the huge global push to fight systemic racism.

BFP: What should business decision makers do in light of this?

NCM: The Black Lives Matter movement is now the biggest human rights movement in history, with protests taking place in all 50 US states and multiple countries across the globe and is a pivotal moment for all. Business decision makers should ensure that they have acknowledged the BLM movement, both to their employees and their customers. They have a duty to their employees to allow those affected by the events to have the support they need, and it is important to refresh inclusion policies, initiatives and encourage open dialogues about race and white privilege in the workplace.

The change I would like to see is for the same events to stop repeating throughout history. I believe the message should start with education in schools about black history. Give children books by black authors, have them perform plays with black characters, study black history, artists and musicians. It should be a normal part of education to learn about a variety of cultures and backgrounds as an integral part of the curriculum rather than as a special one-off topic.

Learning about the slave trade as if it were an isolated incident in time is not enough. Schools should be teaching the repercussions and implications of 400 years of oppression and know exactly what that translates to today in terms of perceptions and human rights. They need to learn about white privilege and help them identify that they will be a few steps up or a few behind on the ladder due to the colour of their skin, not through anything they have done or achieved. They need to truly understand what it means to say that Black Lives Matter (too).