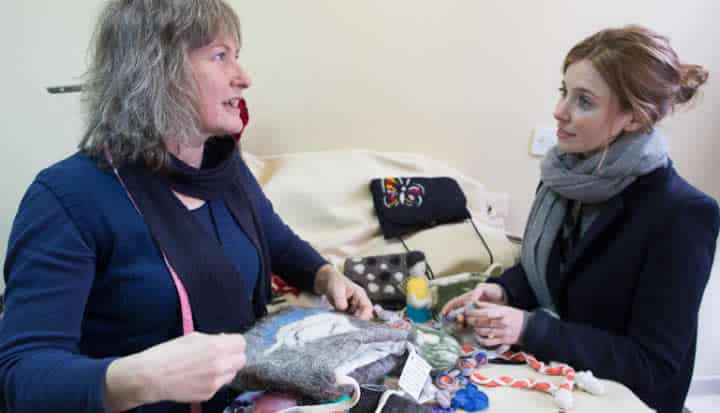 My Visit to Entrepreneurs in Bosnia-Herzegovina


In early December BBC Three journalist, Stacey Dooley, accompanied staff from The Co-operative and CARE to visit female entrepreneurs in Bosnia-Herzegovina who have received microloans through lendwithcare.org.

So here we are, arrived in Sarajevo. I've been given an amazing tour of the city by lendwithcare.org's local microfinance partner and CARE Bosnia. Then straight off to meet the lovely Azra. Amazing lady, remarkable story, massively inspiring. Azra's husband is very poorly and so she's had to take full responsibility in supporting the whole family. Her young lad is 11. Thanks to Lendwithcare, Azra has been able to make this happen. Her loan ensured she could get her own small business (a small general store in a suburb of Sarajevo) up and running. Better news still, she told me this afternoon she's moving premises to a bigger and better shop this Thursday. Cracking news. Hoping to pop my head round before I fly home. She told me she literally can't imagine where she would be if it wasn't for the loan.
To read more about Azra, and other women like her, please click here

Second day here in Bosnia. Today I spent time in and around Srebenica. Srebenica is significant in Bosnia - this is where the genocide took place in 1995. At the Srebenica memorial, we heard first hand about the thousands of men and boys who lost their lives, from someone who managed to survive. Seventeen years on, the war has finished, but the problems created by the war are still visible. Lives were destroyed then and people are still trying to rebuild them now.

Just outside Srebenica we met Sefika, who's 21 and married with a 20 month-old son, Adnam. It was a real pleasure spending time with Sefika. She was able to explain very clearly the benefits of being involved with Lendwithcare. She told me if it wasn't for the opportunity of a loan, she doesn't think her husband's wage would be sufficient in supporting the whole family.

Sefika used her loan to buy a cow. Initially the cow was used to feed her baby and now the plan is to sell the calf, which will enable her to continue supporting her family, including her young son Adnam.

Sefika lost her father during the war and her brother soon after. She tells me her, and all of her girl friends who are of a similar age - early 20s - have no real hope of becoming employed any time soon, which unfortunately I'm learning is a massive problem here - youth unemployment. Despite being up against it, Sefika was so welcoming and incredibly positive about the future. Sefika wanted to thank lenders in the UK. She said she was very grateful for the loan and had invested it wisely.

Today we were back in the capital Sarajevo. I met Mediha, who runs a tailoring and craft shop, a business she started when she lost her job after the war.

Starting from home, Mediha worked hard to move her business into small premises. And now with help from Lendwithcare, she has a thriving business with the equipment she needs.

I could tell how much the loan had meant to her. She said it was the only way to get her family back on their feet after the war and broke down when she talked about the journey she'd been through.

Mediha wanted to thank lenders back in the UK who'd supported her to grow her business and urged them to continue to provide the chance for Bosnian women to start a business of their own.

Although I've only been here a short time it's become very apparent, very quickly, just how important these loans are, with one of the entrepreneurs telling me she literally sees this as the only option for women in Bosnia. Lendwithcare is a fantastic opportunity for people who ordinarily would have no other option.

And with Christmas around the corner I guess there's no better time to check out Lendwithcare.org and maybe buy your pal or loved one a gift voucher.