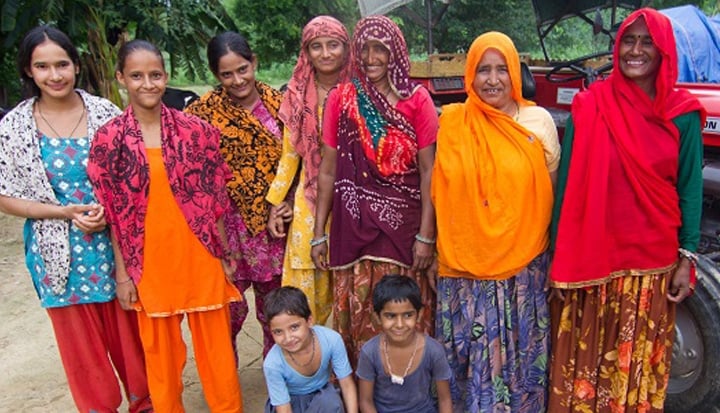 Lalu Ram bought a tractor for US$8000 with a loan from Au Financiers, a non-bank finance company based locally in Jaipur. Farmers like Lalu Ram would find it almost impossible to obtain a loan from a ‘traditional’ bank as they often do not have the proper documentation.With the use of a tractor, Lalu Ram is able to produce three times more wheat than before – and with the increased income earned through selling the wheat, he can now build a bigger house and send his children to good schools. His daughter, Sunita, attends an international girls’ school nearby. Her ambition is to open her own school.

India’s economy is growing at a rapid pace and foreign investment has been steadily flowing into areas such as Mumbai and Bangalore. But low income states such as Rajasthan, where farmer Lalu Ram lives, have not been touched by such rapid growth. Domestic and foreign investors face particular challenges in these parts of India, including red tape, weak infrastructure and governance issues.

CDC invested US$20 million in Au Financiers in 2013. Au Financiers lends to the low income section of the population – farmers and small-scale entrepreneurs who otherwise would find it almost impossible to obtain a loan from 'traditional' banks asthey do not have proper documentation. Although Au Financiers has been successful, many businesses in India’s low income states struggle to find the investment they need to grow.

Geoffrey Manley, Investment Director, Debt and Financial Institutions, CDC Group said: “In India there is quite a robust banking sector but the banks are primarily in the large cities. You have a whole segment mostly living in rural areas that are not able to access that traditional banking sector. That’s where finance companies like Au Financiers are able to step in. It was really an ideal partner for us and central to our strategy for India."

Au Financiers was founded by entrepreneur Sanjay Agarwal in 1996 and, since then, he has seen it expand enormously, particularly over the last five years. It started with one branch in Jaipur but today it has around 200 branches across the country. Its annual turnover has grown fast, from US$200,000 in the 1990s to US$20m today. It provides 3,000 jobs today and helps 250,000 customers, such as farmer Lalu Ram, increase their incomes and expand their businesses and farms. But it has not been without its challenges.

Sanjay Agarwal, CEO, Au Financiers said: “The foremost challenge was that initially capital was not available. It came very late, after 12 years of running Au Financiers. The next challenge is how we can manage our human resources, because this a very people-focused industry, and you need to have good people around you to understand the customer.”

Au Financiers demonstrates business success and development impact. It creates jobs for thousands of people as well as the opportunity to expand businesses and income for hundreds of thousands of customers throughout India. An expanding business means more income for farmers like Lalu Ram, who can save up for his children’s education and allow them to fulfil their dreams. CDC's investment will contribute to a further 2,000 jobs and an additional 22,000 customers.

Uttam Tibrewal, Executive Director, Au Financiers said: "A lot of customers graduated from one vehicle to four vehicles, five vehicles. They own a house now, have children going to schools… it’s a commercial world, but still, there’s an impact of our financing into their lives.Their livelihoods are improving."