Animal Medicine on the Move: Delivering Agro-Vet Services to Pastoralists 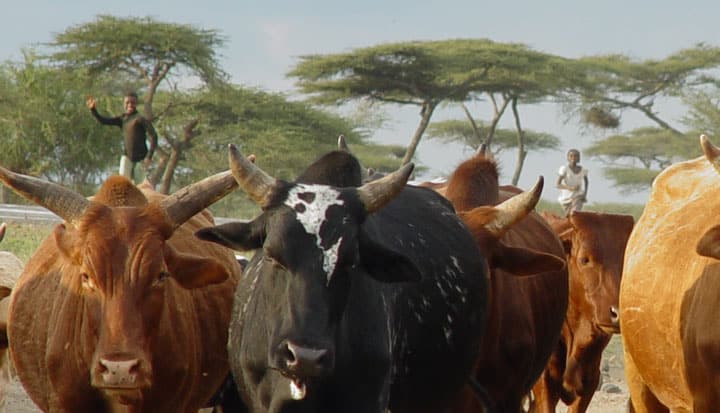 
Dr. Jackson Kinyua serves as the Director of Veterinary Services in Garissa County, a rural, semi-arid region of northern Kenya, near the border with Somalia. The public servant’s job is to look after the health of approximately 4.4 million cattle, sheep, goats, camels, and donkeys, which make up the backbone of the county’s economy. It’s a gargantuan task. “The delivery of animal health services requires enormous resources, more than the government can afford,” he said. “We try to do as much as possible, but the rest needs to be provided by the private sector.”

Most of the livestock in Garissa County is owned by pastoralists, who routinely travel across wide swathes of territory in search of water and fodder for their animals. This mobility makes it even more difficult for Dr. Kinyua and others working in northern Kenya’s livestock sector to ensure that the animals receive the veterinary services they need.

Trypanosomiasis, rinderpest, foot-and-mouth disease, contagious bovine pleuropneumonia (CBPP), peste des petits ruminants (PPR), and worm infestations are a constant threat to the animals’ economic value and even lives. Vaccines, de-worming, castration to selectively control breeding, and veterinary medicines would benefit the health, productivity, and value of livestock. But it is difficult to offer these services to populations that are constantly on the move.

To address this challenge in Garissa and other regions where pastoralists live, TechnoServe’s Innovation in Outcome Measurement (IOM) project— a two-year program to develop and test cheaper, better, and faster ways of collecting key agricultural data— partnered with the International Livestock Research Institute (ILRI) and the Kenya Markets Trust (KMT) to evaluate creative new ways of providing commercial agro-vet services to pastoralists.

The IOM pilots tested three approaches for increasing the offering of commercial agro-vet services to livestock keepers to see if they would be financially viable for agro-vets and bring benefits to the herders. In Garissa County, IOM and IL 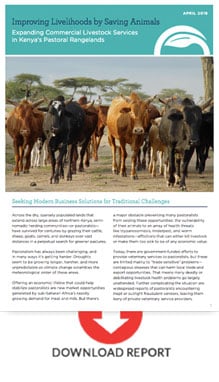 RI ran a pilot designed to meet pastoralists in the places where they congregate their livestock: watering holes/points and weekly livestock trade markets. Government officials and a commercial agro-vet—FACTS Agrovet Limited—networked with pastoralists through community disease reporters and offered their services at the events.

In Isiola and Marsabit Counties, agro-vet company Sidai, Africa partnered with the two county governments, as well as VSG-Germany and Northern Rangeland Trust, to lead vaccination and livestock health campaigns that would bring pastoralists together. The governments created awareness for the events and provided oversight and disease surveillance services, while Sidai staff sold veterinary supplies and livestock health services to pastoralists.

In Kenya’s Turkana County, KMT worked with agro-vet company Silo to establish a network of microfranchises in small communities. Initially, Silo had just two stores in the county, a number that was insufficient to cover an area of nearly 80,000 square kilometers. To expand the firm’s reach, KMT and Silo recruited existing small, general stores to offer Silo products and basic advice to pastoralists. The local entrepreneurs who own these shops receive basic training on business skills and animal medicine, are accredited by the firm, and serve as a first alarm for the outbreak of animal disease.

To measure the return on investment for pastoralists, the IOM team first evaluated the impact on behavior and outcomes and found that mobile agro-vet services would drive a 40 percent increase in vaccination, a 15 percent reduction in herd sickness, and 14 percent reduction in herd mortality. Taking into consideration the value of surviving animals and their offspring, as well as additional milk produced and the cost savings from not having to treat as many sick and dying animals, the project found that the average pastoralist family could earn an extra $7,000 per year—a total of $140 million when applied to 20,000 pastoralist families.

The agro-vets also benefit from the new markets for their products and services. It’s estimated that firms would earn an additional $190,000 in the first year of a full pilot, and $4 million over three years if they expanded their reach to 20,000 herders.

A profitable future for pastoralists

The shared benefits make this a sustainable long-term relationship. Already, FACTS, Silo and Sidai are looking to scale up their involvement with pastoralist communities. This can create transformative change in these communities. But improved agro-vet services are just one part of the puzzle. New research shows that other investments can make significant improvements to the lives and livelihoods of pastoralists; for example, TechnoServe conducted a rapid assessment that found that improved traceability would allow pastoralists to sell their meat into higher-value markets and reduce the loss of human and livestock life to raids and cattle rustling.

By engaging on the full range of issues affecting pastoralist communities, the private sector can play a leading role in delivering better livelihoods.

This is the fourth in a series of posts about new approaches piloted by the Innovation in Outcome Measurement project. A case study on the livestock models is available here. The previous post in this series addressed soil testing.