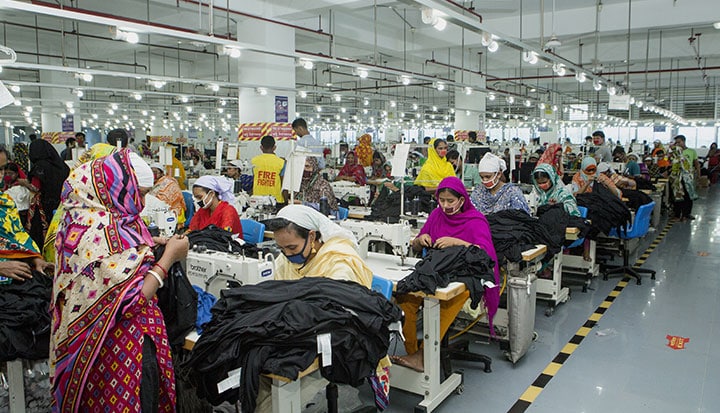 
“The workload is tremendous here. They swear at us when we fail to complete the work. … They scold. They say, ‘Hey you! Daughter of a bitch, daughter of a pig! How come so much work has been piled up?’ …At such times I feel really bad. … I cannot stand this. I cry. I feel like quitting job. But I can do nothing. I have to work here to take care of my family. My family lives on my earnings.”

Violence against women is one of the world’s greatest social, economic, and public health problems, pervading the home, workplace, and community. Globally, 35 percent of women have experienced some form of violence, and more than 700 million women have experienced violence from their intimate partners. And in the workplace, violence, sexual harassment, and verbal abuse against women is still common. The Fair Wear Foundation estimates that about 60 percent of female workers in Bangladesh and India have experienced harassment at work. Gender-based violence and harassment violates women’s human rights and undermines their health and well-being. It can also affect companies, creating negative impacts on long-term productivity.

Like other women’s empowerment efforts, addressing gender-based violence and harassment in the workplace requires holistic and integrated approaches. With the launch of HERrespect in Bangladesh and India, BSR HERproject is helping companies take on broader strategies to tackle this pervasive issue.

Traditionally, efforts on violence against women in the workplace have focused on addressing three factors: structural forces (such as weak legal and institutional frameworks), individual factors (such as inequitable gender attitudes), and material realities (such as poor access to legal services or counseling). To address these, organizations, companies, and other stakeholders have advocated for stricter laws, enforced compliance standards, or built the capacity of female workers.

However, while these are important interventions for very real drivers of gender-based workplace violence, evidence suggests that changes in legal and material circumstances, or in individual knowledge and attitudes, may not lead to decreased violence against women. This is because in many societies, social norms dictate that violence and verbal abuse is both typical and appropriate. Indeed, this fall, the UN High-Level Panel on Women’s Economic Empowerment identified adverse social norms as one of the seven major systemic constraints that contribute to persistent gaps in women’s economic opportunities. When a woman believes she is inferior and deserves to be abused, a paid job is not that liberating.

For example, being shouted at in the factory setting is considered both typical, as it is an almost a daily experience for many workers, and appropriate, because it is seen as an effective way to achieve production targets. In many factories, managers and workers alike believe that abuse correlates to higher output. At high-demand times, such as the arrival of large work orders, an impending shipment date, or before vacations, verbal abuse increases, which we have heard directly from factory workers. Indeed, verbal abuse loaded with sexual content is one of the most common acts of sexual violence in the garment industry.

Evidence indicates that transforming gender norms and power relations is one of the most effective ways of tackling violence against women. HERrespect, which is supported by DFID’s What Works to Prevent Violence against Women and Girls, uses the HERproject methodology to build a harmonious and productive workplace through:

For the next two weeks, November 25-December 10, organizations and companies around the globe are participating in “16 Days of Activism Against Gender-Based Violence.” BSR and HERproject are proud to participate in this campaign, and we invite companies to join us: Please follow @BSRherproject on Twitter, and share your thoughts with us on how to prevent and combat violence against women.

BSR’s HERproject is a collaborative initiative that strives to empower low-income women working in global supply chains. Bringing together global brands, their suppliers, and local NGOs, HERproject drives impact for women and business via workplace-based interventions on health, financial inclusion, and gender equality. Since its inception in 2007, HERproject has worked in more than 420 workplaces across 14 countries, and has increased the wellbeing, confidence, and economic potential of more than 500,000 women.

BSR is a global nonprofit organization that works with its network of more than 250 member companies and other partners to build a just and sustainable world. From its offices in Asia, Europe, and North America, BSR develops sustainable business strategies and solutions through consulting, research, and cross-sector collaboration.