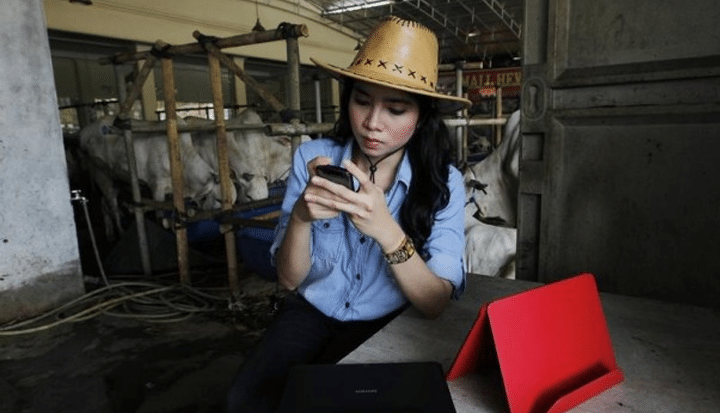 A salesgirl dressed as a cowgirl waits for clients in a cattle showroom in Depok, West Java province, Indonesia, Oct. 18, 2012. REUTERS/Enny Nuraheni

A salesgirl dressed as a cowgirl waits for clients in a cattle showroom in Depok, West Java province, Indonesia, Oct. 18, 2012. REUTERS/Enny Nuraheni

When it comes to women’s economic empowerment, we tend to hear only about the two ends of the spectrum: high-flying women who’ve made it to the top in the macho world of big corporations, or poor women trying to scratch out a living to feed and clothe their families.

But women in the middle of that spectrum often play a critical role in their communities that is only starting to be recognised by policymakers and development workers.

Root Capital, a non-profit social investment fund, has highlighted this issue in agriculture by applying a so-called gender scorecard to its work. The fund lends capital, delivers financial training and strengthens market connections for small and growing agricultural businesses in poor, environmentally vulnerable places in Africa and Latin America.

In its 15 years of lending, it has observed that women are often hired for - and excel at - office jobs in accounting, marketing, sales and other mid-level management roles in agriculture, which are highly influential but less visible and less studied than top-tier leadership roles.

By applying a gender lens to its portfolio of 250 clients, it measured the frequency of women in these positions to understand the phenomenon better as part of its “Women in Agriculture” Initiative launched two years ago.

Whether a coffee cooperative in Nicaragua, a maize seed distributor in Kenya, a mango exporter in Burkina Faso or an artichoke processor in Peru, women agricultural workers perform key jobs as mid-level accountants, sales and production managers, and field officers, Root Capital found.

These "hidden influencers" have a disproportionally high impact on their families and communities, according to a policy brief published this week.

The term “hidden influencers” was originally coined by management consultancy McKinsey in the context of large corporations, denoting people other employees look to for input, advice or ideas about what’s really happening in a company.

“That middle tier of women employees are really the backbone of the business, but they haven’t been the subject of study or strategic development,” Root Capital Chief Executive Willy Foote told Thomson Reuters Foundation.

“They’re coming from the community themselves and they become like heroes. We found that’s what a lot of people aspire to - to become one of them,” Foote said in an interview.

Foote argued that these “hidden influencers” in agriculture will become the leaders of tomorrow. The potential is huge, with some 200 million women working in small-scale farming worldwide.

"What they’re doing is highly impactful for thousands of people, so for me the implication is ‘let’s not fetishise the two extremes of the economic spectrum’,” he said.

Foote also said there are signs of improvement after decades of massive under-investment in farming, even though African governments still only spend 5 percent of their national budgets on agriculture when 70 percent of the population’s primary economic activity is in the sector.

Root Capital launched its policy brief "Applying a Gender Lens to Agriculture" at SOCAP 14, a conference that brings together social innovators, entrepreneurs and investors to help boost the flow of capital to social good. Find out more about SOCAP here.

Editor's Note: This blog was previously published on Thomas Reuters Foundation and is reproduced with permission.
Previous postNext post