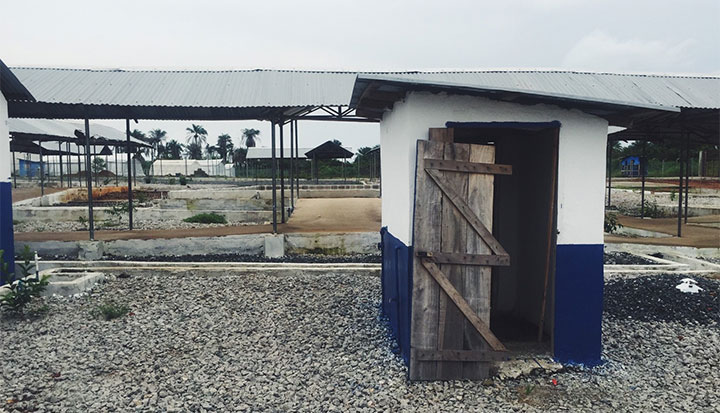 Gathering insights and feedback on the PPE prototype from frontline health workers.


With the announcement of a viable Ebola vaccine coming almost three years after the Ebola outbreak began, questions around how prepared we are to fight future pandemics remain unanswered. The vaccine stands out as one of the only concrete advancements made towards preventing future Ebola outbreaks. Globally, too little has been done to learn from the crisis and improve responses to future health emergencies. The underwhelming reaction to the Zika virus only confirms fears that we still aren’t adequately prepared for the next global health crisis.

In exposing vulnerabilities and forcing frontline health workers to respond with little support or precedent, Ebola revealed opportunities for health innovation – that is, it showed us what we needed. Unfortunately, the global health community and private sector have invested little to help innovations come to fruition. The private sector, particularly, is unsure whether inventions spawned from an outbreak that affected some of the world’s poorest markets are commercially viable. To heed the call to do something with what we’ve learned from Ebola, the Ebola fighters themselves are best equipped to point the way forward.

Take personal protective equipment (PPE), for example. PPE consists of a suit and protective layering that completely covers health workers’ bodies and enables them to administer treatment to Ebola-infected patients with less risk of transmission. While PPE can be live-saving for the workers, it can also prevent them from doing their job: it causes extreme discomfort by trapping heat inside the impermeable materials; the goggles frequently fog which reduces the worker's visibility; hoods and masks interfere with the ability to communicate with patients; and the process of donning and doffing the suits is meticulous and slow and when contaminated can result in spreading infection to the wearer.

Despite these challenges, PPE is crucial for caregivers in settings at high risk of transmission, providing them with relative security from contamination to focus on rehabilitating their patients. As one health worker responsible for the Ebola response told me, “Better PPE meant we could work longer hours. Patients needed more attention than we were able to give them.”

During the initial Ebola response, the pieces of PPE reaching health workers such as coveralls, goggles, and hoods were of poor quality and the sets were mismatched. The protocols for using the equipment were unclear or irrelevant for the equipment at hand. As a result, many of the already scarce health workers - the ones needed to stop the spread of Ebola - perished. Health workers were left to make do with the equipment they got. One Ebola fighter stated, "We were like kids playing dress-up. We took things up, we tore it to make it work. We changed things all the time. We just tried to fix the problems ourselves."

USAID, recognizing the missed opportunity for health innovation during the Ebola outbreak, funded research and development for innovators that are creating a new generation of PPE, decontamination methods, and treatment units. USAID’s Center for Accelerating Innovation and Impact identified 14 innovators through its Ebola Grand Challenge, and supported these innovators as they developed and tested their products.

International Personal Protection (IPP) is one of the Ebola Grand Challenge innovators and partnered with materials manufacturer Kappler and Cornell University to create a new PPE suit which is lighter, safer, easier to don and doff, and improves visibility during use. To test its new design, IPP recently traveled to Sierra Leone with Dalberg’s Design Impact Group to learn from the worldwide experts in PPE, the Ebola fighters.

Gathering insights and feedback on the PPE prototype from frontline health workers.

The research team spent two weeks in Sierra Leone collaborating with the frontline health workers responsible for responding to the Ebola outbreak. We visited the decommissioned Lunsar Ebola Treatment Unit (ETU), which was erected at the height of the epidemic in a rocky clearing cut from dense forest. Today, all that remains of Lunsar ETU are cement slabs, cinderblock walls, and corrugated zinc roofs. While touring the remains with two former health workers, we learned that people have a complicated relationship with PPE.

We noticed an isolated shed on the outskirt of the clinic. The shed, we were told, housed “the most joyful shower of your life.” If you beat the odds and were confirmed free of Ebola, patients would shower there before being discharged. As the patient showered, the health workers responsible for their care would sing and drum outside. After the patient was clean and clothed, the drumline of health workers would hug the patient one-by-one. Until that moment, the patient only knew these health workers through the impersonal barriers that PPE imposed. The suits created a disconnect between the workers and their patients, further isolating patients that were clinging onto life. By hugging the healed on their way home, the health workers related to their former patients as individuals for the first time.

We focused on the "hacks" or the product modifications that the health workers made to their inferior PPE as clues to the features and protocols that a new generation of PPE should incorporate. We traveled to Sierra Leone with a prototype of a suit designed by IPP and its partners that is easier, quicker, and safer to don and doff, lighter, cooler, and with improved visibility for workers and facial recognition of the health workers for the patients. While this early-stage prototype already addressed many of the pain points with existing PPE, the real design process began came alive when we put the prototype in front of doctors, nurses, hygienists, and burial teams.

One day, we visited a remedial infection prevention and control training for frontline health workers. Near the end of the day-long training, when engagement among the group was lagging, we were called to the front of the hot and cramped tent to present our prototype. We had barely finished our introduction before two dozen nurses, hygienists, and burial workers were on their feet. Once again, we learned that PPE elicits a visceral response. These Ebola fighters tore at the seam of the prototype, donned the suit and role played how erratic patients might compromise it, and argued over product tweaks and the proper donning and doffing protocols. We then took these insights along with the prototype to a tailor in Victoria Park Market in downtown Freetown to refine the suit for further rounds of feedback.

IPP and partners will then incorporate this feedback into the suit for a final round of laboratory testing before production. The commercial viability and impact of this new generation of PPE are dependent on standard-setting bodies establishing more stringent standards. Our perspective is that health worker safety and the humanity of patients should never be compromised.

As the global health community continues to work to rebuild the health systems in the Ebola-affected countries and develop products and policies to better respond to future health emergencies, the most salient lessons will come from those with lived experiences and a personal stake in the outcome. The most salient lessons will come from responders who faced the crisis with grit, courage, and creativity.