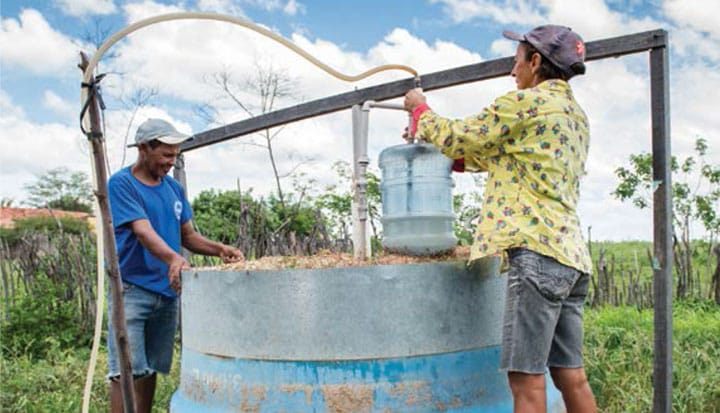 What do engine manufacturer Rolls Royce, shipping company Maersk and Kenyan toilet provider Sanergy all have in common?

All three are using the circular economy concept to increase their productivity. In Sanergy’s case, they use the waste from their network of high-quality, low-cost toilets in the slums of Nairobi to produce agricultural inputs and energy. Meanwhile Maersk are redesigning their ships so that they will ultimately be able to make a new ship out of the remains of an old one, reducing their exposure to global steel markets. And Rolls Royce have embraced an alternative business model: they retain the ownership of their jet engines and customers pay instead for each hour of use, giving Rolls Royce an incentive to design reliable and long-lasting pieces of equipment.

However, whilst the three have the circular economy in common, there is also an odd one out: Sanergy, and that’s because they operate in a low-income country.

A new report from Tearfund and the Institute for Development Studies suggests that the circular economy offers a triple win for those living in poverty: creating jobs, protecting the environment and saving lives (twenty times more people die of diseases linked to mismanagement of waste and pollution than die from malaria each year). However, there’s a danger that this opportunity will be missed.

The circular economy is going mainstream in high-income nations, with McKinsey, the World Economic Forum, Accenture and others all suggesting big gains for business, jobs and the economy, but the potential in low and middle-income countries is typically overlooked.

Whilst businesses in high-income countries are retrofitting existing business models and supply chains to make them more resource efficient, many operators in developing countries are moving away from circular models towards a ‘take, make, dispose’ economy. Instead, we could be building on these nations’ existing circular practices (albeit often in the informal economy) to leapfrog straight to a circular economic model. This would dramatically reduce the tension between lifting people out of poverty (through economic development) and protecting the planet (which is threatened by our current growth model); a tension that casts a long shadow over the Sustainable Development Goals.

Adopting a circular approach often requires businesses to think outside of the box and adapt to the local context. For example, in Brazil both Diageo (a distiller and brewer) and Porto Seguro (an insurance company) have established a partnership with the Vira-Lata cooperative of former-waste pickers. The cooperative collects steel car parts from the Porto Seguro insurance company’s network of car repair workshops, and sorts and sells this material to Gerdau, a steel components manufacturer. In the glass supply chain, the cooperative collects glass bottles from Diageo retailers and sells them to glass recyclers such as Owens-Illinois. Both arrangements ensure lower costs than if the companies had managed the reverse logistics system by themselves, and the door-to-door collection and sorting services prevent used beer bottles and car parts ending up on the counterfeit beer or components markets.

However, choosing to work with waste-pickers can be risky. They often require support to organise into formal associations or cooperatives and improve their business skills, even if they offer an attractive alternative to traditional reverse logistics. Nevertheless, this particular form of partnership is beginning to take off: In Brazil, former waste-pickers now operate more than half of the countries waste sorting facilities, an arrangement that improves their incomes and working conditions whilst increases recycling rates and reducing costs for government at the same time.

There are a number of other obstacles to greater uptake of circular economy approaches in low and middle-income nations, including lack of know-how, intellectual property barriers, coordination failures and finance. However, pioneering businesses are overcoming these hurdles, with circular approaches bearing fruit in a wide range of sectors, from remanufacturing for white goods (Brazil’s NatGenius) to agriculture (Tearfund’s partner Diaconia supports farmers to generate renewable energy and fertiliser from waste), to metal finishing in India (through technology sharing), to urban waste (ProComposto see opportunity in Brazil’s organic waste problem).

Perhaps the circular economy offers a win-win opportunity for your firm’s operations in the Global South, if you are prepared to consider a new approach and investigate whether there are existing local circular practices that you could take advantage of?

This article draws heavily on a new report from Tearfund and the Institute of Development Studies, available here.