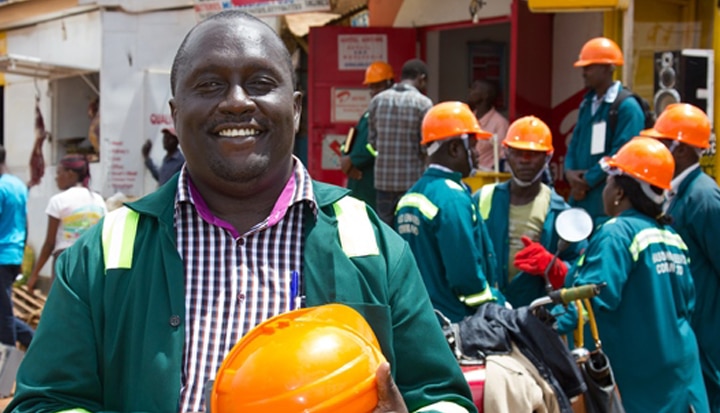 In 2004, Uganda’s electricity distribution network was very run down. As a result of many years of neglect, the network of over 20,000km of poles, sub-stations and wires had fallen into disrepair. There were approximately 120,000 rotten poles in the system, which was a serious issue both in terms of quality of supply and safety. Customers weren’t paying their bills, with only about 70 per cent of potential revenues being collected, and there was a very high level of electricity theft. Connection levels were low, with only about 250,000 customers (both households and businesses) connected to the network.

Today, Umeme is Uganda’s electricity distribution company. It took over the concession following privatisation in 2005, and over recent years has played an important role in modernising Uganda’s power network. Since then, Umeme’s focus has been on improving quality of supply, safety standards and revenue collection. It has replaced rotten poles, cut losses that occur from theft and technical reasons from 40 to 20 per cent, and increased connection levels to just under 600,000 customers.

Umeme was set up by CDC in 2005, and has since been managed by Actis, a leading emerging markets fund manager. In this time, CDC has invested US$15.1 million in Umeme, to finance its significant programme of modernisation, and Actis has supported Umeme through this transformation process.

Thanks to the continued support of CDC and Actis, Umeme has been able to make significant improvements to the network. As a result of this programme of work, thousands of jobs have been created – both directly through the work to replace poles and install pre-payment meters; and indirectly by providing the opportunity for customers to expand their businesses as a result of a reliable supply of electricity. The long-term, patient support from CDC and Actis has created a company that can now attract investment from wider sources.

Responsible investing is also important to CDC. Helping companies achieve good standards of governance, along with strong environmental and social policies, is an integral part of how we add value. At Umeme, safety has been dramatically improved as a result of improvements to the network, a safety outreach programme for members of the public, and training of staff and contractors.

"CDC, fundamentally, were the only people who were prepared to take a risk in the electricity distribution sector at that time, from 2005 to 2009. Those types of investors are very, very important because when a company like Umeme is at that formative stage it’s almost in crisis; you have a dilapidated network and it’s not viable at that stage. So you need a certain type of investor who understands the long term, and who’s prepared to work with you for a five or six year period, until things turn around.”

On the ground, Umeme’s modernisation programme has meant replacing poles and installing pre-payment meters. This process has created lots of jobs. Umeme employs beween 2,000 and 4,000 contractors to carry out much of this programme. In addition, poles are produced locally and cable is manufactured locally, which also creates local jobs.

One of these contractors, Haso Engineers Company, now employs over 400 people, and has grown approximately ten-fold as a result of its work with Umeme. Contractors like Haso Engineers are trained on safety and the company ensures that its staff members continue to adhere to this training. As a result of this focus, the company has seen a reduction in the number of accidents amongst its staff.

Umeme’s business customers range from small, rural customers to large industrial producers of steel and beverages. Regardless of the size of business, all need a reliable supply of electricity to survive and grow, and for jobs to be created.

Roofings Group is the largest steel producer in East Africa. It’s a major employer with over 1,250 staff on its plant at Namanve Industrial Park to the east of Kampala, and another 1,000 on its plant on the Lubowa Estate to the south of Kampala.

Roofings invested heavily in its modern plant at Namanve which opened in 2011. Without a reliable source of power, the company can’t operate. The plant currently has a 28 megawatt power requirement, supplied through Umeme.

When it opened at its first site in Kampala in the 1990s, Roofings found that the supply was not reliable. It could only operate for 12 hours a day and for the other 12 hours, the electricity would be shut down. Since starting production at its newest site three years ago, Roofings has had a constant power supply. This reliability enables it to operate three shifts and to employ more people.

"Now with a continuous power supply we employ a lot more people.”

Violet Nabbanja is fortunate. Electricity was introduced into the area in which she lives two years ago. With a regular supply of electricity she can run a small business from her home outside Kampala. Her business, Vena Grain Millers, processes local grain and then sells it on for a profit. The extra income helps her look after her family of four children and provide local jobs – she currently employs 12 people. In the future, she wants to expand her business. She plans to double production to ten tonnes per day and introduce a chicken-rearing business.

“Electricity has helped us a lot to run the business, process our maize, without it there is no way you can run those machines.”