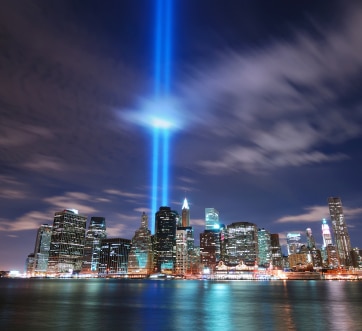 
This past September 11th, representatives of MyGoodDeed rang the opening bell at the New York Stock Exchange in memory of the victims of the terrorist attacks 11 years ago. The literal ringing in of the day by this nonprofit served as a clarion call for community service, putting the world on notice that September 11th is no longer just a day for mournful reflection. Thanks to the efforts of MyGoodDeed, the Corporation for National and Community Service, Action America and other organizations, September 11th is now also a day for individual community impact and inspirational corporate philanthropy.

In 2009, the Edward M. Kennedy Serve America Act established September 11th as a National Day of Service and Remembrance. This observance encourages citizens to spend one of the most tragic days in American history engaged in an act of service to their communities. Signed into law by President Bush, the National Day of Service and Remembrance was first celebrated by presidential proclamation the same year.

Paying respect by paying it forward

The National Day of Service allows Americans to demonstrate unity through the healing power of service, providing a fitting tribute to those lost eleven years ago today. The objective isn’t about engaging in any particular cause; rather, the day is meant to give back to communities in ways that best suit the interests of volunteers. Because this observance is directed at every citizen, it serves as an entry point to volunteerism and service for thousands of Americans who would otherwise be sitting at home.

Congress charged the Corporation for National and Community Service with helping to support this effort across the country, in the hopes that citizens from every state will join in to create a popular day of volunteerism. As a result, the National Day of Service has grown to become the nation’s largest annual day of charitable service; for the 10-year anniversary of September 11th last year, more than 33 million people participated.

"Even today, when there are many pressing issues that divide us throughout the nation, it is remarkable and inspiring to see how the country joins together each 9/11 to remember and pay tribute through good deeds and charitable service," said David Paine, CEO and co-founder of the 9/11 Day Observance. "Over the past 11 years, Americans have kept their promise never to forget the victims and heroes."

"The anniversary of 9/11 represents a moment in time where every American has a personal and emotional story," said Tim Armstrong, AOL Chairman and CEO. "This anniversary is a time for us to come together and help raise awareness for volunteerism and service, in an effort to honor those impacted as well as helping to create a movement of inspiration and encouragement."

This year, the Corporation for National and Community Service awarded grants to seven organizations to engage Americans in service during the 2012 September 11th National Day of Service and Remembrance. The grants support a range of service efforts, including educating citizens on disaster preparedness, developing emergency plans, promoting fire safety, and building affordable housing for veterans and military families.

“Each year, more and more Americans are recognizing that service to others is a fitting and appropriate way to honor the memory of those who were lost on September 11,” said CNCS CEO Wendy Spencer. “Service and remembrance can help rekindle the spirit of unity and compassion that swept our nation after 9/11 to help meet the challenges we face today.”

While community impact relies heavily on individual volunteerism, corporate social responsibility plays an important role as well. The National Day of Service and Remembrance offers companies the opportunity to show a commitment to corporate citizenship. For the business community, it’s a chance to rally their troops without the need for employee incentive programs; after all, not much arm twisting is needed to recruit employees in tribute to fallen victims and first responders. Participation shows that companies see the day as not just another day to make money, nor a day of mournful paralysis.

What does corporate giving back look like? For Clear Channel it meant participating in a campaign called “I Will,” which calls on listeners to perform good deeds and charitable acts to honor 9/11 victims, survivors and those who responded to the attacks nearly 11 years ago. In August, Clear Channel Outdoor digital screens in Times Square displayed images of military veterans, first responders, 9/11 family members, supporters and members of the general public as they took turns standing on a 30-foot "I Will" sculpture and declaring what good deeds they will perform this year (their “I Will” pledges) in observance of 9/11. Clear Channel also aired tens of thousands of advertisements on 850 radio stations throughout the country between August 20 and September 11th to encourage participation in the National Day of Service and Remembrance.

For NYSE Euronext, the parent company of the New York Stock Exchange, it meant serving as one of the primary underwriters for the National Day of Service. For AT&T, it has meant demonstrating the company’s cultural commitment to corporate volunteerism by turning out in force to the tune of 140,000 employees and retirees. For Best Buy, it has meant donating $500,000 to MyGoodDeed, while for JPMorgan Chase it has meant a donation of $50,000 to 9/11 Day and an encouragement to employees to participate.

Intel: Making The World Better For Every Person on Earth, That’s All