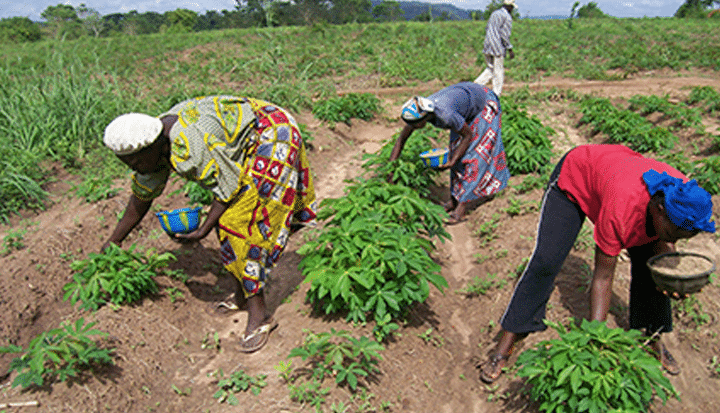 
Africa has awoken. Ten of the world’s fastest growing economies are now in Africa, with around one third of our 54 countries seeing annual GDP growth of over 6%.

However, this momentum has not yet spread to all sectors. Cereal crop yields in Africa are only one-third as high as in developing Asia, and only one-tenth as high as the United States. When one in five Africans still goes to bed hungry – how can this sector be ignored?

The African Union has named 2014 to be the Year of Agriculture and Food Security in order to set out steps towards a hunger free and sustainable Africa. In my view, one major part of this puzzle that must be tackled is Africa’s incredibly low use of fertilizer.

Caption: Fertilizer storage in Africa. But use is relatively low on the continent. Image: IFDC/Danielle Mbesherubusa on Flickr

But what will it take to make this happen?

The first way to improve access to fertilizer is through investment in infrastructure. Without adequate road and port facilities, costs of transporting fertilizer remain high, and well out of reach for many smallholders. Currently, only 16% of Africa’s 1.8 million kilometres of roads are paved – an obvious area for improvement.

Improving port facilities to receive greater volumes of fertilizer as Yara is doing in Tanzania, will also temper prices. Rwanda has subsidized transport costs since 2008 and as a result has seen its maize yield increase by 73%.

There are barriers to fertilizer accessibility and affordability. Image: IFDC

Another route to improved fertilizer use is through proper training programs for farmers and agricultural input retailers. Fertilizer will have the most impact if farmers use the right nutrient source, at the right rate, at the right time, in the right place.

The fertilizer industry, in partnership with international and national research and extension organizations, is addressing this education challenge. The Africa Fertilizer Volunteer Program, which we at IFIA recently launched, supports global fertilizer experts in volunteering their time and knowledge to help build a vibrant African fertilizer value chain, and thus improve smallholder access to fertilizer.

Of course, access to fertilizer is only one of the many interventions that African farmers need to boost their productivity in the future. The work carried out by One Acre Fund, for example, bundles the timely, local distribution of inputs like fertilizers and improved seeds with three other interventions a farmer requires – namely, credit, training to improve farmers’ profits and links to a market to sell their produce. This model has been shown to double beneficiaries’ yields, giving those farmers not only the food and nutrition security they need, but also a resilient livelihood.

Fertilizer also has an important role to play in terms of levelling the field for female farmers. FAO has recorded women’s use of fertilizer as being significantly lower than men’s, mainly due to lack of access to this vital input. This is a major factor that contributes to their yields being around 20-30% lower than men’s. It has been cited that this gap could be bridged sizably by improving women’s access to fertilizer and such an intervention could feed a further 150 million people.

When equipped with the means to use fertilizer effectively, Africa could see its food production soar. When this effective use of fertilizer is coupled with improved seeds and the application of up-to-date engineering and agronomic knowledge, studies have shown cereal grain yields can triple, from one tonne per hectare to three tonnes per hectare.

We already have 60% of the world’s potential additional farmland, and by giving its soil the nutrients it needs could have a dramatic impact on crop yields, the livelihood of African smallholders, and consequently food and nutrition security levels on the continent and around the world

If 2014 is truly to be Africa’s Year of Agriculture and Food Security, then the Africa fertilizer gap has to be addressed; we must find ways to get this vital input into farmers’ hands. Only then can a Green Revolution in Africa truly flourish.