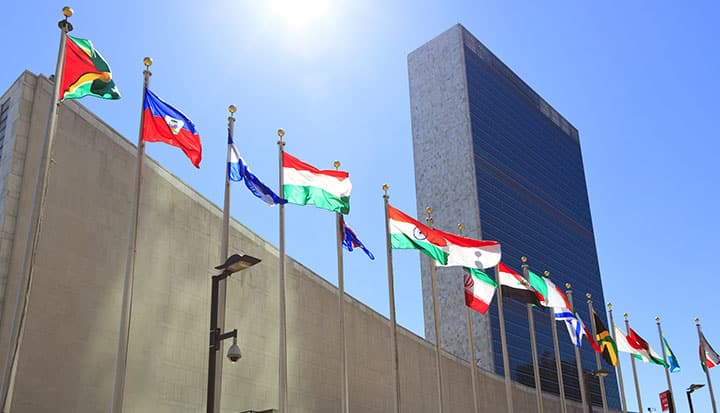 
The High-level Political Forum on Sustainable Development held from July 11-20 2016 at United Nations Headquarters in New York is an annual platform for reviewing progress and guiding global efforts on the achievement of the Sustainable Development Goals (SDGs) by 2030. During the first HLPF oriented towards the SDGs, the global business community was present in a very substantial way, organizing an SDG Business Forum to share business efforts already under way during the first year of SDG implementation The International Chamber of Commerce (ICC) and the UN Global Compact were the lead organisers of the SDG Business Forum along with the United Nations Department of Economic and Social Affairs and the ICC-led Global Business Alliance for 2030.

Business for 2030 helped curate one of the day’s sessions, which featured a 17 person ‘rapid fire’ review of 17 different business people addressing each SDG. Below are key points and outcomes from a few of the SDG Business Forum’s sessions.

H.E. Mr. Thomas Gass, Assistant Secretary-General, Policy Coordination & Inter-Agency Affairs, UN Department of Economic & Social Affairs, stated that “the 2030 Agenda is the product of a transparent, inclusive, and participatory process,” that the spirit of shared ownership must live on, and that stakeholders must feel the agenda is theirs to implement. Additionally, Mr. Gass noted that diverse partnerships must be formed for the implementation of the SDGs and that there is a great opportunity to build partnerships across businesses.

Carolyn Miles, CEO, Save the Children, highlighted the work her organization has completed in collaboration with the private sector. For instance, in 2012, Save the Children worked with UNICEF on developing a framework for the rights of children in business “UNICEF’s Children’s Rights and Business Principles.” Ms. Miles noted that the launch of the SDGs allows Save The Children to pair private profits with public good through partnerships with, companies such as GlaxoSmithKline, with whom it has co-developed a heat-stable gel for umbilical chords, which has saved thousands of lives.

Following the opening of the Forum, John Danilovich, the ICC Secretary General and Lise Kingo, the Executive Director of the UN Global Compact, signed a Memorandum of Understanding that formalized many of the ways the two organizations have already been closely collaborating. The MOU stressed, among other things, the need to enhance UN engagement with business around the SDGs and the potential for further increasing business and industry engagement in the implementation of the 2030 Agenda.

In a series of rapid fire presentations, business representatives highlighted examples of what they are doing to implement each SDG and move Agenda 2030 forward. Click here for a brief recap of all 17 presentations. Most of the initiatives are now also featured on the Business for 2030 website, created by USCIB, which now has 160 initiatives by 45 companies taking place in over 150 countries that relate to 80 of the 169 SDG targets. Several USCIB members, including Baker McKenzie, MasterCard, Novozymes, and Pfizer provided case studies during the panel. The dynamic session was ably moderated by H.E. Mr. Ib Petersen, Ambassador to the UN for Denmark, who kept the diverse interventions from the 17 business speakers and several Member States and others from the floor all within the two-hour time limit, setting, what Mr. Petersen said, must have been a UN-record.

Session 2: Private Sector Investment in the 2030 Agenda: Going from Billions to Trillions

This session analyzed, from a private and public sector viewpoint, how business can be more engaged in defining the policy reform agenda, particularly with respect to anti-corruption, peace and the rule of law, which ultimately can facilitate private sector investments and operations.

Jay Collins, Vice Chairman of Corporate and Investment Banking of USCIB member Citigroup Inc., focused on the importance of measurement in working towards the SDGs: more indicators are needed to help smaller businesses report their progress. Mr. Collins also referred to green bonds as an example of utilizing markets to achieve the SDGs. The green bonds market has blossomed into a $40 billion business, and still has room for improvement. Moreover, Mr. Collins underlined the need for markets to impact multiple SDGs in order to move “billions to trillions.” To target more SDGs, Mr. Collins recommended creating new metrics so that markets can be created around them. Mr. Collins concluded with the remark that partnerships have yielded progress toward multiple SDGs, and should be continued as a result.

Manuel Sager, Director General, Swiss Agency for Development and Cooperation, discussed improving the investment climate, beginning with eliminating corruption. Secondly, Mr. Sager used the example of the Swiss Capacity Building Facility as a way to reduce costs by providing grants for financial service providers in other countries so as to assist the poorer population. Thirdly, Mr. Sager spoke about leveraging private funds through guarantees, derisking, and microfinance. The latter now amounts to over $1 billion in investments, but Mr. Sager warned that one has to be particularly careful with microfinance, as it could cause heavy losses in the job market. Mr. Sager concluded by highlighting the importance of sharing information.

Li Yong, Director General of the United Nations Industrial and Development Organization (UNIDO), spoke about the past success of Private Public Partnerships (PPPs), referring to a repertoire of government partnerships he worked on under UNIDO and in China. Mr. Yong noted that PPPs are very much a proven method and should be continued. In particular, Mr. Yong cited his experience at the Asian Development Bank (ADB), in which the government’s involvement tripled Foreign Direct Investment (FDI) in only one year from $50 billion to $150 billion. Mr. Yong extended this approach under UNIDO through the Programme for Country Partnership (PCP), which created jobs and increased income in many countries.

Florinel Andrei spoke about the success and rapid expansion of the International Arbitration Court for Transport. The initiative offers the global sector of transport a modern resolution instrument for a variety of travel: road, rail, maritime, air, energy, etc... The international arbitration court for transport is a multimodal institution—the court has 25 arbitrators from 12 countries. The organization has worked specifically toward SDGs 8, 9, and 16 (specifically worked on by The International Network of Specialized Arbitration). The heavy expansion of this committee—most recently extending to Spain and Azerbaijan—shows the success.

Joy Marini discussed the involvement of Johnson & Johnson in working toward SDGs 5 and 6 (on a commitment made in 2010). They have reached 400 million women and children since then. All these people have been reached through partnerships. J&J has over 500 partnerships, many of which are public/private. Survive and Thrive has been a partnership that has trained 300k health workers in the last 5 years. Survive and Thrive had started as a 6 component partnership. Today the initiative has expanded to 16, including another private sector corporation. Ms. Marini remarks that partnerships have been essential to the success of these programs, however, they are definitely tough undertakings.

Sean Tompkins of the Royal Institution of Chartered Surveyors emphasizes the importance of standards to the SDGs, with his specialty being in the building/construction/infrastructure industry. Standards are crucial as they increase investor confidence and help reduce risk. Mr. Tompkins used the example of buildings to underline this proposition. Buildings emit 40% of the world’s carbon through their construction and use, and 30% of the world’s resources. However, no two places in the world measure the size of building in the same way. Thus, having even rigorous and accessible indicators is not enough to measure SDG progress with regards to emissions—building measurements vary up to 24% throughout the world. Mr. Tompkins focuses on creating standards that will help solve these problems. His organization managed to bring together 70 corporations under one standard of measurement (these standards are also being adapted by governments).

Jong II Lee spoke about Korea Telecom's involvement in the SDGs. KT has 131 years of history and has formed numerous partnerships throughout these years which reach poor populations and provide them with educational opportunities and other resources. KT forms partnerships with both central and local governments to help improve conditions in less developed and remote areas. Mr. Lee also noted that partnerships are key for business to showcase new technology and provide opportunities for new market entry.

This session discussed how business can continue to help develop indicators, as well as the extent to which business is examining the value and role of indicators developed at sectoral and sub-national levels.

Dr. Lisa Bersales, Co-Chair, Inter-Agency Experts Group on the SDGs (IAEG-SDGs) noted that the UN Statistical Commission has agreed upon 230 indicators for the SDG targets. The expert group was instructed that each target should have at least one indicator. The initial list, she noted, is not cast in stone, but rather, was just the first set of indicators used to measure the SDGs. The initial list has been categorized into three tiers:

- targets with existing methodology with data

- and targets with no methodology and no data

Annika Lindblom, Ministerial Adviser, National Commission on Sustainable Development of Finland noted that Finland is one of the countries that had volunteered to report on its progress during this first HLPF. Ms. Lindblom noted that Finland has managed to reach out to and engage individual companies, 60 of whom have committed to follow up with concrete and measurable indicators. In addition, indicators have been Finland’s key integration tools. Finland has already developed 39 unique indicators, which it will now align with the 2030 Agenda indicators. Of the indicators proposed by the Statistical Commission, Finland already gathers data on 42% of them, whereas another 43% will require specialized collection for the 2030 Agenda.

Claudio Volonte, Principal Results Measurement Specialist in the Development Impact Department of the International Finance Corporation (IFC) underscored that the private sector will need support from governments by way of enabling environments for their new investments. Specifically, SMEs have limited capacity in reporting their contributions to SDGs. Consequently, the IFC has made sure that the indicators are simple and relevant to SME’s businesses. The IFC analyzed their individual business, and customized the indicators, aligning the systems to avoid asking for additional information the company wouldn’t find beneficial. The IFC has attempted harmonizing key indicators of private sector development with their methodologies: about 30% of indicators are in tier 3 (no methodologies and no data). Nevertheless, he noted, the private sector can invest in developing new methodologies to improve overall coverage of the indicators by business metrics.

Wrapping-up the very successful event, which had a full audience for the entire day, The ICC Secretary General John Danilovich noted:

“Our message to governments and the UN High Level Political Forum is simple: work with us to put in place the policy frameworks needed to unleash new waves of business investment, innovation and trade in support of the Global Goals.”

This article first appeared on Business For 2030 and is reproduced with permission.