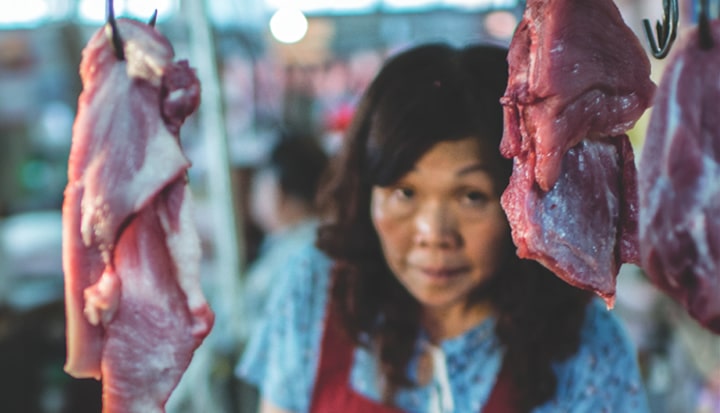 
Cancer. Stroke. Heart disease. Diabetes. These and other noncommunicable diseases are becoming leading causes of death and disease worldwide. And nutrition plays a significant role.

A new report from UK think tank the Overseas Development Institute shows that globally, one in three adults was overweight or obese in 2008, an increase of 23 percent since 1980. In the developing world, the number of overweight or obese adults more than tripled from 250 million to 904 million.

Yet at the same time that populations are consuming too many calories, they are not getting enough nutrients. Some two billion people, in both developing and developed countries, suffer from a chronic lack of vitamins and minerals—a condition known as hidden hunger. Such malnutrition, especially in early childhood, can lead to irreversible consequences like stunted growth and cognitive impairment. Even in the wealthiest countries, shifting patterns of diet and lifestyle are leading to poor nutrition, which is linked to the rising rates of obesity and noncommunicable diseases.

The good news is that obesity and hidden hunger are preventable, in part through a healthy diet. WHO recommendations for a healthy diet include eating more fruit, vegetables, legumes, nuts and grains; and reducing consumption of salt, sugar and fats. In other words, eating nutrient-dense foods instead of calorie-dense, nutrient-poor foods. The bad news is that for many, a healthy diet is not accessible.

Lack of access to nutritious foods is a barrier to good health worldwide.

In developing countries, nutrient-dense foods cannot always be found at the local market or grown or raised on the family’s land. The only food available to a mother may be the local staple crop, which doesn’t provide all the protein, vitamins and minerals her children need to grow and thrive.

In developed nations, though supermarket shelves are stocked with a variety of nutritious foods, purchasing a healthy diet may not be realistic for low-income families. A mother may be forced to leave fruits and vegetables on the display in favor of more calorie-dense processed foods—foods higher in fats, sugar and sodium—that will fill her children’s bellies for less money. One recent study showed that in the United States, eating healthy costs $1.50 more per person per day—that’s $2,200 a year for a family of four. For many families, it’s simply out of reach.

As a result, many people do not get all the essential nutrients, such as vitamins, carotenoids, polyunsaturated fatty acids (PUFAs), amino acids and minerals, their bodies need for optimal health.

Enabling food, beverage and condiment producers to make their products healthier through nutrient fortification as well as by replacing or reducing unhealthy amounts of ingredients like saturated fats, trans-fatty acids, sodium or sugar would be a major step forward along the road to good nutrition. This approach, combined with an effort to provide these products at prices more consumers can afford, could help tackle both obesity and hidden hunger.

Consumer education tools for nutrient-density already exist. Scientists and organizations like the US Food and Drug Administration, the UN Food and Agriculture Organization and WHO have developed a variety of indices to rate the nutrient- and calorie-density of foods. These include the nutrient adequacy ratio (NAR), the nutrient quality index (NQI), the natural nutrient rich index (NNR) and the calories-for-nutrient score (CFN). Food producers can use these tools more prominently to help educate consumers about healthier food choices.

But consumer education is not enough. Even if a mother knows that one food is healthier than another, her pocketbook will influence which one she ultimately decides to buy.

That’s why DSM is working with industry partners to develop a concept for affordable, nutritious products that bridge evidence-informed nutritional deficits in consumers’ diets via two steps:

In February, the University Medical Center Groningen will host a workshop for academia, governmental organizations and industry to advance the nutrient-density approach. I look forward to sharing the outcomes.