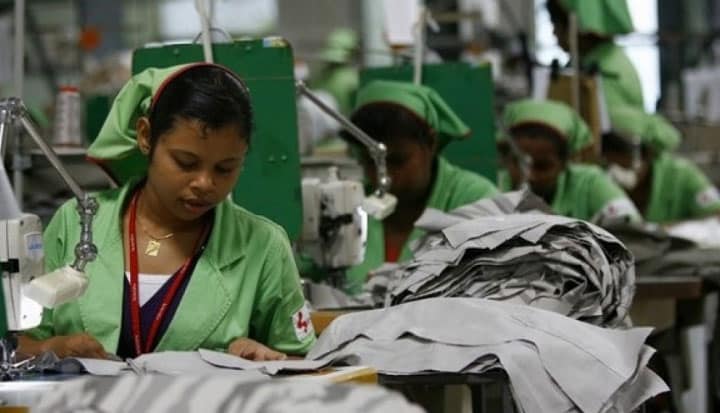 
Shirone Kaushalya works in a factory producing leather jackets. But she rarely sees the finished product.

The 30-year-old woman uses a hammer to pound on the ridges and bumps of raw leather until it is smooth enough for stitching. Then she hands the flattened material to the next station in production and grabs another piece of leather – up to 180 during her shift. To meet her quota by day’s end, Shirone finds it difficult – like many of her co-workers - even to take a bathroom break.

She works at a garment factory near the international airport in Negombo, Sri Lanka, about an hour north of the capital city of Colombo. Three years ago, Shirone left her hometown about 12 miles away to work six days a week at the factory, leaving behind her young son in exchange for long hours and shared accommodation in a boarding house.

Today is Sunday and her day off.

She and eight other workers from various garment factories have gathered at a sparsely furnished house-turned-office. The road outside is busy and most are late for the 9:30 a.m meeting. Each worker finds a seat in the circle casually arranged around a large desk.

“It’s a mental relief to be here,” Shirone says. “We work with a lot of pressure, and it’s very monotonous. When we come here, we get to talk, and there is a lot of mental relaxation and satisfaction from everyone being together.”

This is the monthly meeting of Stand Up Movement Lanka, a network created for garment workers by Sri Lankan social entrepreneur Ashila Niroshine Mapalagama, 36. Stand Up educates workers about their rights, provides vocational training and has set up a social security system for its members. Founded in 2007, it is not a union but a network to empower workers through a relationship-driven, bottom-up approach.

Incentives To Stay In The Industry

Ashila, a former garment worker for five years in Jordan and Sri Lanka, was elected an Ashoka Fellow in 2014 and named as the first Fellow for “Fabric of Change,” a global initiative of Ashoka and C&A Foundation for a fair and sustainable apparel industry.

A garment worker in Sri Lanka earns an average of 55 cents per hour, according to the World Bank. Women make up 71 percent of the industry. Most are migrants from rural areas, leaving behind families and children to work in the Free Trade Zones (FTZ) where factories are located.

According to Ashila, most remain in the garment industry for just five years because of dissatisfaction with their low salaries and tough working and living conditions. In addition, trust funds accrue at the end of five years, compelling workers to collect the money and go back to their villages, where few job opportunities await them. Meanwhile, factories lose trained workers, lowering productivity, and Stand Up loses its members that have helped to develop worker rights.

Ashila’s big idea to transform the Sri Lankan garment industry is by supporting workers and educating them about their rights so they have sustainable employment. Stand Up also provides a financial safety net. Members of the network pay into the system monthly. They can borrow -- interest-free -- up to LKR 25,000 (US $167). In the case of a death in their family, they are given a donation of LKR 15,000 (US $100) to help pay for funeral expenses.

Eight Hours To A Living Wage

Ashila believes that informal campaigns and relationship are the first steps to educating workers about their rights. This approach is in marked contrast to traditional workers’ unions in which leaders preside over formal meetings for hundreds of workers.

“When we wanted to ask for more salaries, it was difficult for us to directly confront the management because workers were afraid. So we organized a pahan puja (lamplighting ritual),” she explains. “And if we wanted to build relationships with workers, we’d go to a boarding house, get everyone together and watch a documentary (on workers’ rights).”

Stand Up now has a core group of 15 and a membership base of 580 workers. That swells to about 1,200 during a campaign. Ashila says she is working to expand the benefits Stand Up provides and grow membership by at least 4,000 members in the next five years.

Foremost, it is Ashila’s goal to ensure workers can earn a living wage within eight hours of work.

“There are many hidden costs for workers,” she explains. “These workers are separated from their families and are absent from family matters. They cannot obtain leave to perform many social obligations and become distant from society. So these hidden costs are not covered and the workers are under a lot of stress. If they can earn the living wage within eight hours, many of these issues can be resolved.”

Already, being a member of Stand Up has improved work conditions for Shirone, the garment factory worker. She says that her managers know she is part of the network.

“Before I joined, they would not hesitate to keep me till late, even after 10pm,” Shirone says. “But now, since they know that I’m in this movement, when the time’s up, even if the production is not done, they say you go home now. That’s what this movement has done.”

Mary-Rose Abraham is a multimedia journalist with more than fifteen years’ experience as a reporter, producer and videographer. She is currently a freelancer based in Bangalore, India.

Fabric of Change is a global initiative by Ashoka and the C & A Foundation to support innovators for a fair and sustainable apparel industry. Learn More