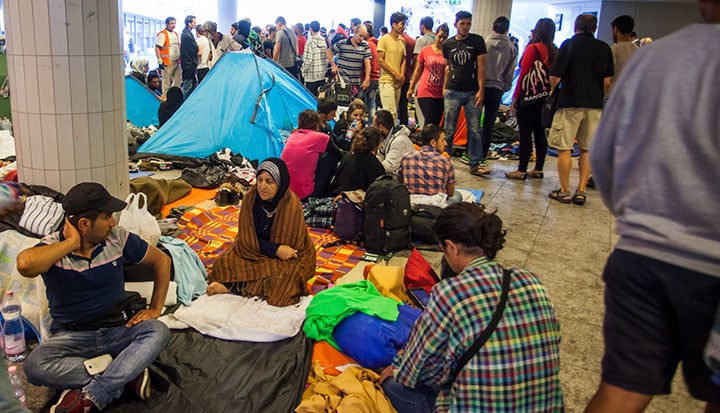 
When a natural disaster happens we look to the government, public services, NGOs and charitable organisations to come to our rescue. But as the current European refugee crisis has shown, governments can be slow to react. While bodies of drowned refugees wash up on the shores of Greece and Turkey, the EU country representatives are engaging in long and complex discussions on how to deal with the crisis. Not only are the politicians reluctant to take responsibility, they try to shift the burden to neighbouring countries or focus on reinforcing their borders.

In humanitarian crises such as this, community participation is of great importance. When the story of a drowned little boy’s body went viral on social media, it touched the hearts of millions of people around the world. This initiated an overwhelming solidarity with refugees.

Since the government was to slow and bureaucratic to respond, the community took action. For example, thousands of German households opened their homes to host refugees, and the people of Iceland called on their government to house 10,000 refugees, flying in the face of their ‘controlled migration’ policies. In Hungary, ordinary community members expressed solidarity by bringing food, clothing and other emergency supplies to refugees stranded at the train station.

This community reaction is a perfect example to show the capacity and power of civil society to influence change and shift the world in a more positive direction. Part of the transformation is changing mind-sets from the general perception of refugees as ‘scroungers’ and ‘freeloaders’ to human beings with rights and needs like anyone.

And it is not only the issue of refugees. The community also has a role to play in shaping the response to global issues such as poverty, gender inequality, climate change, conflict, corruption and organised crime. They need to question whether Western economic development models really serve their country and their peoples’ needs. As leading Chilean economist Manfred-Max Neef [*] points out, it is the failure of many of these development approaches that has led to the increase in poverty, massive debts and ecological disasters.

So what about the private sector’s response? Most often, they show their generosity through philanthropic, charitable and economic empowerment activities. Others jump into emergency relief, using their resources and their capacity to assist. For example, in Indonesia during the flood disasters in 2013, the private sector assisted in transporting of around 20,000 people and goods to safety. Another case is Unilever, which provides low cost sanitation in war-torn and disaster prone areas.

Taking into the account ‘the power of the community’ and ‘the power of business’ shouldn’t we consider combining these forces to work towards more sustainable development, especially in countries where development models have failed? I believe we should. By doing so, businesses can not only increase their economic prospects, but also build pride among their employees, loyalty from their customers and trust with their other stakeholders.

Strong and effective partnerships require creativity, as they involve multiple individuals and issues that can pull in different directions. Most studies suggest that building partnerships is a fluid rather than a linear process, and for it to work it is imperative to have good leadership right from the top (board member level), with a clear sustainable business strategy and a common partnership plan.

Having attended the Coca Cola Hellenic Stakeholders Forum[?? ] in Milan last year, I was impressed by their focus on socio-economic impacts in the regions in which they operate. This is in evidence through their water stewardship programmes and women and youth empowerment project, all of which are built and delivered through effective partnering and collaboration with the community.

Tackling sustainable development is not easy. The problems of inequality are deeply embedded in countries around the world. Poverty, youth unemployment and human security are key challenges. And now we are facing the refugee crisis - a problem that needs to be on top of the agenda for sustainable economic and social development. After all, these crises are no longer only emergency humanitarian crises but systemic crises that need a strategic approach in order to find a sustainable solution.

We are doing very little to tackle the root causes that push people to leave their homes. We are doing very little to assist forced migrants to move beyond post-traumatic stress in refugee camps all over the world. In other words, we need to help refugees not only to overcome their traumatic experience, but also to empower them and provide them with skills that help them to thrive and create positive change.

I know from my own refugee background and personal experience of relocating to the UK 25 years ago that I longed for normality in spite of all the barriers I faced. I wanted to be acknowledged and given equal economic opportunities. I had to build my resilience and learn to live in harmony, despite facing discrimination, prejudice and lack of opportunities. But the same experiences have helped me thrive and create my own opportunities.

Fortunately, sustainable businesses are on the increase, the power of innovation is being embraced rapidly and therefore the time is ripe to pursue innovative partnering practices in tackling the refugee crisis. Migrant Entrepreneurs Network is ready to create partnerships with companies that want to help displaced migrants to reshape their lives. The network aims to work with business to recognize the positive contribution of migrant entrepreneurs globally, empower marginalised migrant communities through entrepreneurship and promote sustainable and responsible practices by migrant entrepreneurs.

As the African proverb says: to go fast, go alone; to go far, go together.

CHALLENGE: How can we mobilise more business action to support refugee livelihoods and long-term resilience?
Click here for more stories about
Micro, Small and Medium Enterprises