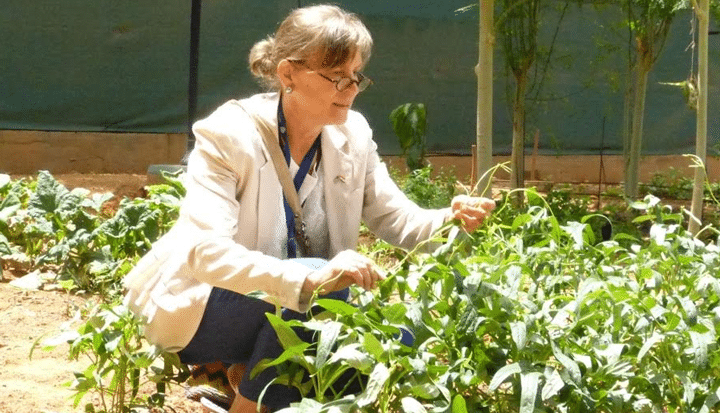 
In July 2016, MCC signed a $437 million compact with the Government of Niger to improve access to water for agriculture and livestock and expand access to markets. In this interview, MCC Resident Country Director for Niger Kristin Penn discusses how, together with the Government of Niger, MCC is building stronger institutions and making foundational investments that can help Nigeriens lift themselves out of poverty and advance security and prosperity across the region.

What does agriculture mean to Niger?

I can’t overemphasize the importance of Niger’s agricultural sector. Niger’s population is overwhelmingly rural and relies on this sector for food, nutrition and livelihoods. The agricultural sector employs more than 80 percent of the population and represents the second-largest export sector in the country.

Are there any humanitarian or security challenges that threaten Niger and its agricultural industry?

Niger is large — about twice the size of Texas — landlocked, and mostly desert. It is also one of the least developed countries in the world. Water scarcity is a major issue and food crises are all too common. Since 2001, Niger has coped with four years of severe food insecurity caused by drought that led its government to request international humanitarian assistance.

This country is also located in a fragile region of the world that faces threats of conflict, terrorism and trafficking of people and illicit goods. The Government of Niger is a U.S. partner in the fight against extremism and in promoting stability in the Sahel region of Africa.

How is MCC’s partnership with the Government of Niger expected to help alleviate these issues?

Jointly conducted economic analyses by MCC and the Government of Niger identified a lack of access to water for agriculture and livestock and poor access to markets as the top constraints to the country’s economic growth.

Our compact will work to improve and sustain livelihoods through significant investments in irrigation, roads, and marketplace infrastructure. Helping the Government of Niger better deliver vital infrastructure and services to its people will not only expand economic opportunities, especially for Niger’s women and youth, but also strengthen the country’s institutions for the long term.

Because conflicts over scarce resources such as food and water are often exploited by violent extremist groups, investing in the agricultural sector can also help strengthen regional stability and grow the economy.

Why is this MCC compact focused on infrastructure?

Infrastructure development is critical to economic growth, poverty reduction and building resilience. Without infrastructure, households and farms don’t have reliable, affordable access to water, and businesses don’t have dependable roads to connect them with customers. That’s why our Niger Compact is focused on key public infrastructure investments that are essential to attracting private sector investment and growth in the agricultural sector — especially when accompanied by proper policy and institutional reforms.

Without a conducive, business-friendly policy environment, infrastructure and other development investments are limited in their economic impact. MCC is focused on systemic impact and supports its partner countries as they pursue important policy and institutional reforms that help draw in private investment for sustainable, long-term growth.

How does the Niger Compact benefit U.S. businesses and the private sector?

The trade relationship between the United States and Niger is small but growing, and U.S. exports to Niger — including aircraft, electrical machinery, and vehicles supporting productive sectors like agriculture — are up by 23 percent since 2012. As Niger’s economy continues to develop and diversify, there will also be more trade and investment opportunities for U.S. businesses and investors, and more ways for us to deepen our bilateral relationship.

It’s also important to note that Niger is a leading regional producer of agricultural commodities such as cowpea and a major supplier to West African regional markets. MCC’s investments will create new opportunities for the private sector to respond to expected increased demand for agricultural inputs like fertilizers, improved seeds, and processing equipment for irrigation and postharvest activities.

How do MCC’s investments in Niger build on existing efforts by the Government of Niger? How does MCC work with other U.S. Government partners to improve global food security?

In addition to being a Feed the Future partner, MCC is working closely with USAID, the World Bank, and other partners to help the Government of Niger achieve these goals.

You have been living in Niger for seven months now. What has left the deepest impression?

First is the country’s tolerance. People of different ethnicities and religious beliefs live here peacefully side-by-side. Second is the country’s physical beauty, including the majestic Niger River, wondrous acacia trees, and sweeping sand dunes. Third is the country’s livestock industry and its amazing diversity of species. There are the hearty Goudali and majestic Kuri cattle breeds and the graceful Fulani horses that are prized assets for so many families here. The livestock industry is one reason why Niger’s agricultural sector has such tremendous potential. That’s why I’m so excited to be part of the MCC team that is supporting the Government of Niger.