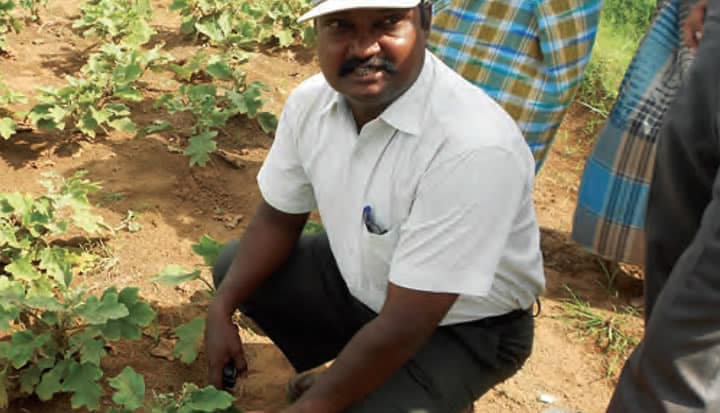 The share of agriculture and allied sectors in India's GDP is 13.7% (2012-13); providing livelihood to nearly 600 million Indians. The decrease in the share of Agricultural and Allied Sectors in GDP of the country in comparison to other sectors is on account of structural changes due to a shift from a traditional agrarian economy to industry and service dominated one. Despite a decline in the sector's contribution to GDP, the production of food grains has increased from 230.8 million tonnes in 2007-08 to 255.4 million tonnes in 2013-14.

However, all is not well in this sector. Food production has become stagnant over the past 20 years while there has been an exponential jump in the population. Productivity is extremely low due to unscientific farming practices, fragmented land holdings, lack of agro-climatic focus for crops selection, lack of access to the right farming advice at the right time. Farmers are plagued by myriad issues all around like timely and reliable access to farm inputs, markets, reliable information at the right time and credit. Thus, farming is becoming a “dead” profession with many marginal farmers opting to leave their lands barren and migrating into the cities in the hope of a better life. This situation has led to serious introspection within TCS and various initiatives leveraging technology to alleviate the issues in the agricultural sector have gathered momentum. The Progressive Rural Information & Digital Enterprise (PRIDETM) powered by the TCS mKRISHI® platform is one such initiative. The mKRISHI® concept began to be developed in late 2006, and within three years the first small scale pilots were started.

Approach: Farmer looks for specific, actionable information. Farmers are not just interested in remotely sent SMS, market information or agro advisory. Farmer wants an end-to-end service and expects personal attention and occasional visit by expert once in a while. Most of the services in vogue do not stand up to his expectations. Though there has been initial enthusiasm to such services there is no repeat buying. Our experience has been no different. To tackle this problem, we have designed a model that integrates agro-advisory services via calls and SMS with personal visits from field executives.

Mechanism of mKRISHI® and role and responsibility of mKRISHI® linkage mechanism (Govt., NGO or Private):

TCS is responsible for the creation of a tailor-made mKRISHI® platform as per the needs of the client. TCS provides the IT services and infrastructure for the agro-advisory service. mKRISHI® is currently being deployed for horticulture, pulses, fishery, dairy and sugarcane farmers in 13 Indian states. In Maharashtra, Tamil Nadu, Haryana, Madhya Pradesh, Odisha, Uttar Pradesh, Gujarat, and Kerala, the mKRISHI® field partners are FPOs with anywhere between 1,500 to 5,000 members registered on mKRISHI® powered PRIDETM model.
Fig: Business model

Process of member registration, membership fee: TCS works in collaboration with NGOs, cooperatives, state governments or other agriculture related agencies to deploy the mKRISHI® - PRIDE™ model to a large group of farmers. Farmers are charged for the services in different ways. This include charging a transaction fee to input providers, retailers, advisory charges through membership, and other services such as animal husbandry and crop consultancy. mKRISHI® is focusing on establishing operating model and building an ecosystem.

The farmers are registered in our online system. In farmer registration process around 250 data points are captured as per the project stage. It starts with his personal details, farm details, family details, financial details, other proof of identity and residence details, buying and spending habits, etc.

Functional mechanism of mKRISHI®: Since its inception in 2006, mKRISHI® has seen considerable evolution in its product and model. Using voice, SMS and photo, farmers could send their queries to agro-experts sitting in a remote location. These experts reviewed the messages and provided recommendations using the same mobile platform. The advisory service has so far helped individual farmers significantly reduce costs associated with inputs, increase yield and improve quality of produce, thereby positively impacting their profit margins.

We see this innovation dramatically altering the rural landscape in India over the next 10 years. The fostering of economically vibrant PRIDE™s across the country would enable them to act as nuclei within rural communities for economic job creation, market linkages and enhancement of bargaining power. This would lead to a better standard of living in rural communities and stop the present-day mindless urban migration and the subsequent squeezing to the hilt of the already constrained urban resources.