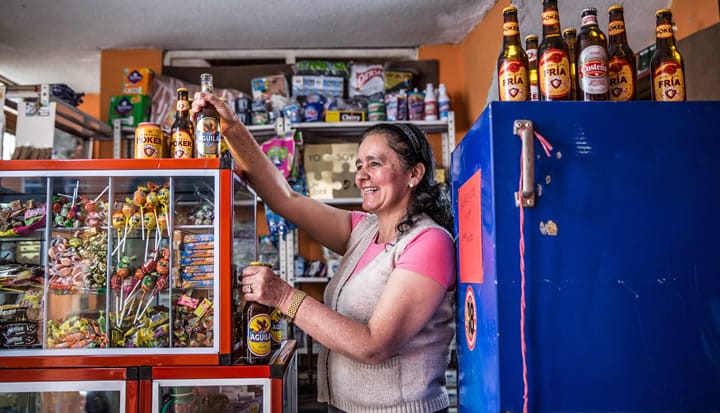 
Banco Agrícola, founded in San Salvador in 1955 and now part of Colombia’s Bancolombia, is El Salvador’s largest bank. Banco Agrícola provides financial services to individuals, micro, small, and medium enterprises (MSMEs), large companies, and government agencies. We have 2,500 employees and have been named Best Bank in El Salvador by a variety of finance magazines.

In 2012, SABMiller’s local subsidiary Industrias La Constancia (ILC) and the Opportunities for the Majority division of the Inter-American Development Bank (IDB) approached us to gauge our interest in allying with the program that later became 4e Camino al Progreso, which ILC was already developing to strengthen their small-scale retail. ILC had identified different issues that could not be financed as part of the commercial strategy of the company, such as loans for working capital, equipment purchases, and so on. A financial ally was needed to facilitate access to financing for the retailers completing the 4e program. There was an evident interest within Banco Agrícola to help micro and small businesses, and 4e provided a path to do so.

Immediately we designed a financial product to fulfill the needs of the clients, based on proper experience in the business. The agreement with IDB and ILC, signed on November 2013, had the following terms:

Since due diligence between IDB and Banco Agrícola took several months, we decided to go ahead and work with ILC on a pilot program of loans, implemented with the clients that had already finished the 4e program in previous years. From December 2013 through May 2014, we successfully loaned US$117,000 to 20 4e graduates. IDB’s involvement enables BA to scale up this activity, based on what we learned in the pilot.

During the 4e program, we also provide a financial education workshop to participating ILC clients, as part of our social responsibility program. This is the first approach we make with potential clients during the program.

Since we signed the agreement with IDB, we have successfully granted 30 loans for US$122,610.