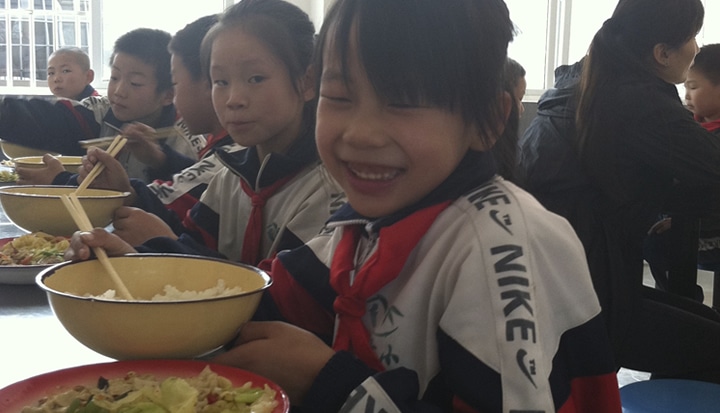 I’ve lived and worked in China most of my life, and have witnessed firsthand the country’s economic rise. The stories one hears outside of China focus on prosperity, massive infrastructure projects, and an increasing middle class and consumer base.

But when I travel to village schools across rural provinces, quite another story is revealed. There I meet the children who have been “left behind.” Migrant workers—farmers who move to industrial areas to work—have built modern China. They leave their children in the country with extended family, mostly grandparents. These children of migrant workers number close to 61 million.

Under the government mandate, the children are required to attend school from Grades 1-9. Many live in villages far from schools. They become boarding students in schools that are not equipped for them. The students have to bring nonperishable foods from home such as dried rice and beans, which they live on for the entire week, and then months and years. The consequence is that these children are malnourished and lag far behind their urban peers in physical, psychological, and intellectual development.

Even though the government is aware of this, and has allocated food subsidies to rural boarding children by as much as US $4.1 billion in 2010, this is still far from sufficient in addressing the magnitude of this issue.

We can help solve the malnutrition problem in a systemic and sustainable way. The Spring Sprouts Kitchen program works to do this by equipping village schools with kitchens so that children can enjoy warm meals with fresh foods such as vegetables, meat, and eggs, providing much better and more balanced nutrition. By simply cooperating with government agencies, nonprofit organizations, foundations, and citizens, this program is a testament to public-private partnership, leveraging six dollars of government funds for every one dollar of private investment. Amway Charity Foundation and its platform of partners not only fund the project but also contribute the power of national logistics and administrative and procurement know-how. Procedures to ensure compliance with standards are put in place and monitored by volunteers. Overall, each kitchen feeds 500 children, employs at least 10-kitchen staff, and sources local food as a customer to about 15 local farms.

With our 2013 CGI Commitment to Action, we are expanding this existing pilot project of 700 kitchens in rural schools to build 2,000 kitchens by 2015. In addition, we will hire, train, and monitor kitchen staff; source local foods; and provide balanced, nutritious, daily lunches for the children. With this commitment, we will feed one million children each day, and as the Spring Sprouts Kitchen program grows across rural China, we are working to create a tipping point that will bring this intervention to each one of China’s 90,000 rural schools.

But the children can’t wait, so we work with urgency. This is the reason we have come to CGI, to mobilize for impact on this critical issue. With more support we can impact millions of the world’s malnourished children. As the great statesman Abraham Lincoln said ‘no person stands so tall as when he stoops to help a child’.