Milk For Sale Not Just Survival 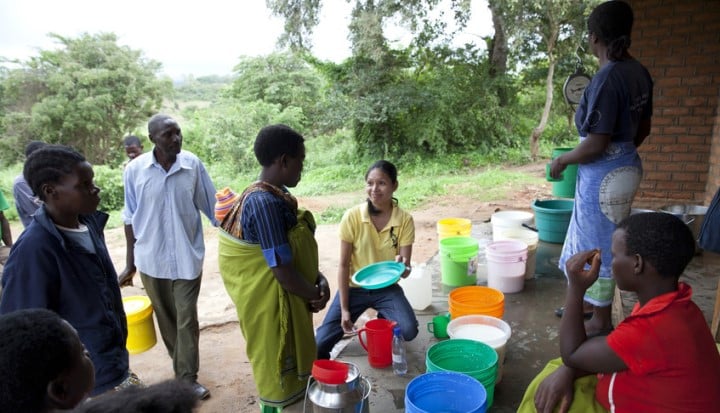 Milk For Sale Not Just Survival


I never thought I could become consumed by the size of a plastic bag of milk, but it was a huge part of my life during the 2 years I spent in Mzuzu, Northern Malawi. The Mpoto Dairy Farmers’ Association (MDFA) became my home community while I volunteered as their marketing advisor and I still live here today. Over time, the farmers learnt how to strategically market their milk, deliver on time and diversify their income. ‘Selling isn’t marketing’ became our motto and I think it was the first time the community saw milk production as more than a means of survival.

My background is in economics and financial management in the Philippines where I worked for eight years after graduation in a range of jobs from marketing medical supplies to government services to a TV station’s foundation but I really wanted more meaning in my life. That was when fate seemed to intervene. Twice over one month I saw an advert from VSO Bahaginan looking for international volunteers and so, after some soul searching I ignored all common sense (and the advice of family) and challenged myself to do something new. Sometimes it’s the things you do that fly in the face of convention that give you the greatest fulfilment and that was certainly the case in with VSO. After an initial placement in Ghana (2008-10), I then went straight into the Mzuzu project.

This placement was part of a VSO Corporate partnership with Accenture in Malawi called Making Markets Work. For five years, they’ve looked at ways to give poor and marginalised people better access to markets and opportunities to earn a more secure income. In the case of Malawi, where there’s a large small-holder farming population growing just enough food to eat, VSO wanted to apply my marketing background to developing sustainable agribusiness practices and I liked the idea of doing marketing that actually helped people.

When I got there, the dairy cooperative was ‘in the red’, recording net losses rather than monthly profits. Trying to understand why they weren’t making a profit I spoke to everyone and watched how things worked. Edward Nyirenda was the accountant at MDFA and he explained that they didn’t know the best way to take their products to market.

I could also see that sales weren’t being recorded, milk wasn’t being stored hygienically and potential customers weren’t being tapped. Working with the management and staff we started introducing a production log book to keep track of the milk coming in daily from farmers to help set daily targets for production and sales.

But the breakthrough moment turned out to be a decision to sell the milk in smaller 250ml packets instead of 500ml. The average Malawian consumer could afford this price which quickly generated more sales. The number of clients the association delivered to doubled, and the ability of the regional association to process and sell milk locally meant that they faced much lower transportation costs.

The results have been impressive. Before we did this work together, the dairy cooperative was producing less than 150 litres of milk each day, and losing the equivalent of £46 a month. Within three months, the milk production rate of the factory increased monthly sales to around £1,850. Thanks to the improved systems the milk sold for to the dairy cooperative has also increased from nine pence to 21 pence per litre.

More than a business case

As a volunteer in this project, I think I integrated into the community and met amazing people there, like 40 year-old Hesco Banda. He’s a dairy farmer who had always struggled to earn enough money to send his children to school and buy food or clothes for the family but over time we started to see his circumstances improve the more milk he sold.

When you live and work in a community like Mzuzu you realise that there’s more than a mere business case for the proper processing, marketing and selling of milk to the masses. Malawi has some of the world’s highest rates of child malnutrition so milk is a key part of this. There’s a chain reaction from a simple marketing intervention that goes right through the community and better nutrition is one of the things that improve.

As for Hesco? By the time I left he was making quite a lot of money from milk sales and had built a new house, His neighbour James Gondwe even presented me with a business plan for expansion of his business before I left. Go Hesco and James!

Rona Ramos, is still living in Mzuzu and is now the Managing Director of a Slovenian NGO called ELA (Education Literacy Arts) working with women and children to raise awareness of learning disabilities in education.