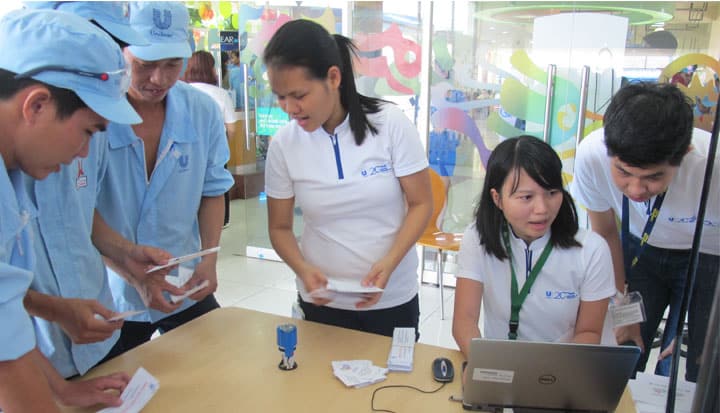 Five years ago, Oxfam and Unilever agreed to an unusual study. Unilever opened up its business so Oxfam could understand how it managed labour rights, and what this meant for workers on the ground. Vietnam was chosen for a case study.

We put a research team together, interviewed workers, managers and stakeholders, reported our findings here, which caused sufficient concern to Unilever's C-suite that a range of commitments was made, including a 'sustainable living' review in 180 countries and a reduction in casual labour.

Then in 2015, we went back to see what had changed. Our new report, Labour Rights in Vietnam: Unilever's Progress and Systemic Challenges, sets out 15 changes. Here are the top three:

Unilever's management now have a much better understanding of the issues Oxfam was concerned about. It has brought in expertise, strengthened its policies and sustainable living plan, has regular dialogue with global unions and has published a report on human rights. At its factory in Cu Chi, near Ho Chi Minh City, a change of management style was immediately apparent to the research team. Workers told Oxfam that Human Resource managers who had previously been perceived as distant, now listened to them, and grievance mechanisms had been improved. Two union shop-stewards had been elected by workers, rather than appointed by management as is normal in Vietnam, the first steps in a journey towards 'mature industrial relations, helped by changes in the political economy.

Last time we found wages were higher than the minimum wage but well short of benchmarks of a living wage, while more than half the workers were employed by a third party on lower terms and conditions. In 2015 we found positive changes on both these fronts. Despite an economic downturn affecting the sector, wages had increased 48 percent for a semi-skilled worker over the four year period, helped by above-inflation increases in the minimum wage. The company had also taken 87 manufacturing jobs in-house as part of a plan to phase out contract labour.

Despite an economic downturn affecting the sector, wages had increased 48 percent for a semi-skilled worker over the four year period

We found Unilever is investing in raising awareness and understanding of its new Responsible Sourcing Policy among its key suppliers, in Vietnam and globally. Suppliers in Vietnam were much clearer than before that responsible sourcing is important to the company, and not just a matter of signing its Supplier Code: 70 percent thought this, compared with 17 percent in 2011.

And what are the three biggest priorities for the future?

Suppliers consulted were sceptical that improving jobs beyond the legal minimum is achievable within the terms of the current business relationship. 80 percent said they didn't think that the additional costs they would incur would be recompensed, given prevailing business practices aimed at containing costs rather than raising standards.

Something of a shock finding was that the percentage of women directly employed by Unilever in its factory has gone down from a low 19 percent in 2011 to a shockingly low 13 percent in 2015, despite the fact that women make up 67 percent of the third party workers. In fact, all 87 of the jobs brought in-house went to men. This sits very uncomfortably with the commitment of Unilever to increase its social impact and empower women as the business grows.

Some workers in Uniever's factory and supply chain, especially those with dependants, still said they had difficulty making ends meet, and this is in an environment where strenuous efforts have been made over a four year period to improve employment conditions. What about other factories in global supply chains where there has been no such focus?

For good labour standards to become universal operating conditions, companies need to spend less time auditing their suppliers and more time analysing the wider system which keeps workers trapped in poverty. This includes the role of governments to protect human and labour rights, the removal of barriers to worker representation and sector wage bargaining, and a review of the business model that prioritises short-term returns for shareholders over ensuring human rights are respected and decent work guaranteed.

This article first appeared on Oxfam and is reproduced with permission.