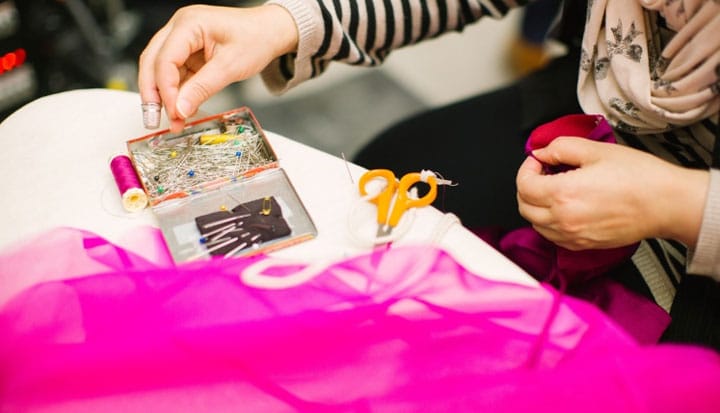 
An estimated 75 million people are now employed by the apparel industry. It’s a number that has almost quadrupled in the last 15 years. With this exponential growth, the not-so-hidden costs of fashion too have increased. But while critics say that changing company behavior simply isn’t profitable, social innovators are proving that there are imaginative and practical ways to get factories and brands on board.

A 2016 report by Ashoka and C&A Foundation found that a key barrier to achieving a more value-driven industry is financial uncertainty. Apparel companies worry that investing in sustainable alternatives brings too much cost and risk. They’re looking for assurance that investments in staff and production don’t backfire, and that there will be a growing demand for ”ethical goods” from buyers.

The good news is that the industry has for years been showing signs of willingness and readiness. World Fashion Week, which starts in Paris today, prides itself on playing a major role in helping to shape what it calls ”fashion’s sustainable future.” But to keep up with the explosive growth, particularly in the ready-made garment industry, factories and brands need to come on board much more quickly, and on a much larger scale.

As a former employee of a large fashion company, María Almazán believes intrapreneurs – people who want to drive change from inside organizations – are key to the transformation process. “There are changemakers in every organization,” she says. “They are not doing it to get rich but to change the industry. They introduce ideas to colleagues that may sound alien at first, but they need tools and evidence to show their peers how it can be done.”

Recognizing the lack of real-world examples of sustainable factories and brands, Almazán set up one of her own in Spain: Latitude. All parts of the organisation are in line with its ethical values, from the way factory workers are treated to the sourcing of raw materials. But more importantly, the entire factory is open-source, functioning as a real-life, profitable example other brands and factories can reference as they adopt their own sustainable practices.

Understanding the confidentiality demands that many existing ethical brands face in sharing their business practices, Almazán turned Latitude into a not-for-profit company. The next step is to convince wary competitors that Latitude really is transparent and ready to share its best practices for industry-wide gain. Almazán: “The other day I had a meeting with some people from France. I told them: you can come here and I can show you around and share our know-how. They just didn’t believe that we would really do that!”

In Bangladesh, meanwhile, serial social entrepreneur Saif Rashid is convincing factory owners that looking after employees can be good for their business in more ways than one. His employee wellbeing initiative APON allows workers to buy discounted household supplies through special shops set up inside the factories, which in turn offers them free healthcare and medical insurance.

The direct benefits from the APON initiative go to the worker, but factories save too through a reduced turnover of employees and fewer staff illnesses. Crucially, joining the scheme also means factories comply with national law which requires employee insurance, something international buyers increasingly demand. The difficulty, says Rashid, is that most factory owners aren’t used to calculating their benefits over the long term. “They don’t always think in terms of: what am I getting out of this and what am I investing? Industry competitiveness in Bangladesh is due to low wages, not long term organizational efficiency.”

It might be buyers who, alongside enthusiastic workers, will help convince more factory owners to join APON. Brands have in recent years started their own insurance pilots, hoping that factories will take over once they’ve made an initial investment. Such schemes tend to be costly and often fall apart once the buyer pulls out. With APON, there is no cost to the buyer as the scheme is funded through commission from the sales of household items in the factory shops. Rashid says the brands he is working with so far are “heavily interested” in his model.

Factories are starting to come on board too, with seven joining the scheme by June and more interested parties on a waiting list. Rashid: “We’re working on the logistics of scaling at the moment: if 1,000 workers finish their shift all at once, we can’t all serve them in the shop so we’re testing mail-orders. And some factories have 25,000 employees. But once we reach our target number of 1,000 workers in one factory, we will be able to replicate the model anywhere and be sustainable.”

This article originally appeared on Ashoka's Forbes Channel and is part of the Fabric of Change Initiative – a three-year partnership between Ashoka and the C & A Foundation unlocking the unique power and potential of social entrepreneurs and their solutions to transform the apparel industry as a force for good. For more information, head to www.changemakers.com/fabricofchange or join the conversation online at #FabricofChange.