In a Hungry Africa, We Cannot Wait for Pigs to Fly 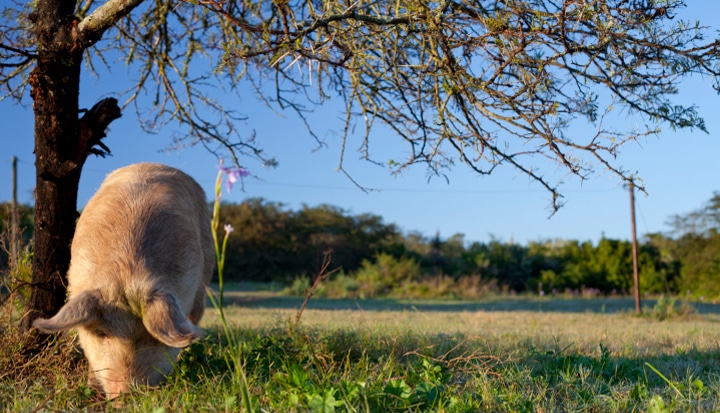 In a Hungry Africa, We Cannot Wait for Pigs to Fly


Poverty and hunger often go hand-in-hand. But in my country of Uganda, farmers are generating a revolution that is overcoming both, and it is based on pigs.

In the past 30 years, the number of pigs raised in Uganda has increased from about 200,000 to 3.2 million pigs. Today, more than one million Ugandan farmers are raising both pigs and their incomes, with women playing a central role in pig farming.

Unlike in China and in developed countries of the West where pig-farming is typically industrial-scale, most of these farmers raise no more than a few dozen pigs. Yet, with their small operations, they are leading a rural transformation that is both environmentally sustainable and capable of lifting millions out of poverty.

My own piggery shows how small pieces of land can be designed to produce optimum income while improving soils, curbing pollution and enhancing the environment. Compared to other livestock, pigs need very little space for production while still living in comfort. While a cow needs one acre of land to produce milk in two years time, a pig needs a maximum of 9m2 to produce about 30 piglets in less than six months. On just one-quarter acre of land, my 30 sows produce 600-720 piglets a year. They not only provide my family with nutritious food, but also generate about $60,000 in annual income.

Even the pig’s waste is useful – I use it to produce energy.

Most of Africa lives off-grid. Over 620 million people in Sub-Saharan Africa have no access to electricity. Excluding South Africa, which generates half of the region’s electricity, sub-Saharan Africa uses less electricity than Spain. It is no mystery that living without power dims the prospects for economic development. In poor rural households, farming cannot be mechanized, food cannot be refrigerated, rooms fall quickly into darkness. And, without a reliable source of electricity, people cut down trees for firewood. This contributes massively to deforestation across the region. It degrades the environment and contributes to drought, erosion, and the emission of climate-warming greenhouse gas.

Furthermore, the carbon fumes released by the burning of charcoal and firewood is toxic. It contributes to more than 600,000 deaths a year through household air pollution--half in are children under five years old.

But we need not wait for the government or private industry to bring electric cables to our doorsteps. A simple anaerobic fermenter can convert animal dung into biogas, providing light and electricity to run appliances in their homes and mechanize their fields. Pig manure enables me light my home, fertilize my food crops, and even produce organic pesticide.

Pigs have also enabled me to maintain a comfortable home, a car, and send my children to school. Now, I spend a good part of my time training small-holder farmers to expand their operations and improve their incomes. With my husband and children, our farm has become a “Teaching Farm” about crop and animal husbandry. Uganda’s Makerere University and other institutions attach students for internships on the farm.

One person I have trained is Nakanwagi Ezeresi. She received three piglets from a government initiative for the elderly. She now earns US$200 every two months from selling piglets and pork, and she lives on $4 a day, rather than $1 a day as in the past. She can afford to eat well, buy her own medicines and warm clothing, look after herself without being a burden to her children—and to give her grandchildren a present when they visit.

Uganda’s livestock revolution is part of a wider change sweeping across Africa as smallholder farmers capitalize on the benefits of mixed crop-livestock farming, and as governments begin to take their needs more seriously. The challenges remain significant: livestock diseases and parasites, low quality breeds and high mortality, limited learning opportunities for farmers, unreliable markets, and a lack of good quality feed among them. Today farmers need strong government policy addressing these issues and their own collective associations to ensure their needs are addressed.

Many of the people I trained now belong to a 100-member pig farmer’s network. Similar networks are forming around the country. One of our goals is to work as together to get good prices for our pork. We are also working with the Ugandan government and the International Livestock Research Institute (ILRI) to form a National Pork Board that will develop guidelines on how to improve pig yields, food safety, and environmental protection.

The opportunities offered by livestock farming in Africa are immense, and are especially important for female farmers who often find themselves excluded from producing Africa’s more lucrative crops. Turning this potential into reality, and doing so in a way that sustains the environment is a challenge worthy of our immediate and sustained attention. We cannot wait for pigs to fly.