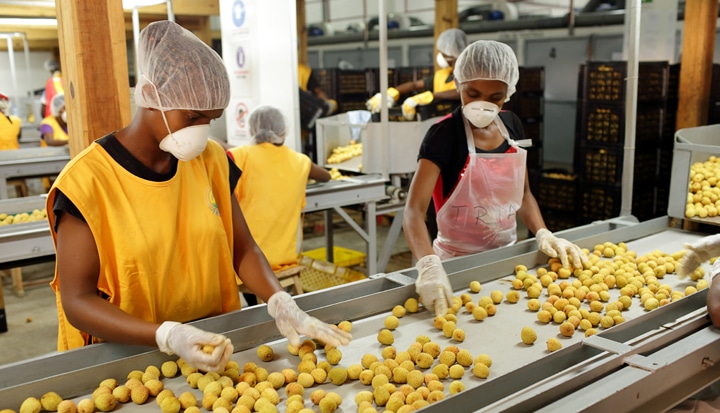 CHALLENGE: How do we collaborate to unlock investment to deliver the SDGs in challenging places?
Friday July 10 2015


Madagascar Lychee Export (MLE) is a lychee export station based in the port of Toamasina, Madagascar. The company buys fruits from collectors and local producers, and then processes, packages, and exports the fruit to European markets.

Prior to 2010, MLE was a small, family-run business operating in a changing industry with rising standards and demands. In 2010, Adenia took the decision to invest in the business. Our aim was to work with the management to support them to meet these new demands.

The lychee industry in Madagascar

The lychee industry is a key pillar of the Malagasy economy. Each year, Madagascar produces an estimated 100,000 tons of lychees. The country is the world’s leading lychee exporter to Europe and delivers around 20,000 tons per year, accounting for about 70% of the total annual volume of lychees marketed in the European Union.

This is a seasonal business. Harvesting is done between November and January, with work reaching its peak during November, with the aim of produce reaching European markets before Christmas. The sector employs large numbers – including 6,000 to 10,000 workers in export stations, 3,000 collectors and around 20,000 to 30,000 farming families spread along Madagascar’s east coast.

In recent years, European customers, including top retail chains such as Carrefour, have required increasingly higher standards in the lychee sector. The achievement of the Global Good Agricultural Practices (GAP) certification, which addresses environmental, economic and social sustainability, has become a prerequisite to remain in business.

To achieve this certification, MLE faced two main challenges: the implementation of a system to meet European food quality and safety standards (including for food ‘traceability’ to ensure it’s clear where food is coming from); and the standardisation of its infrastructure.

To address the first issue, the business grew its dedicated team focused on quality and trained these employees on issues such as traceability. More broadly, permanent and temporary workers and suppliers received, and continue to receive, training on hygiene, health and safety. This was no quick or easy process, and it took MLE, with the support of Adenia, two years to put in place a system which met international best practice.

Secondly, the capital invested by Adenia was used by MLE to make a number of improvements to its infrastructure – one example being the purchase of new sorting belts to allow the production process to be more efficient and hygienic. Within three harvest seasons, MLE moved from a traditional lychee export station using manual sorting tables to an industrial operation using automated sorting belts like top fruit processors around the world.

This investment and continuous improvement led to MLE achieving its Global GAP certification in 2012, ensuring the sustainability of its business.

Standardisation has led to improved relationships

As part of the certification process, MLE worked with small-scale growers who cultivate small orchards. These small-scale collectives required significant assistance and training from MLE. In working together throughout the process, MLE built a strong relationship with several local growers. This relationship has turned into a competitive advantage, especially during periods of fruit scarcity, as MLE has been able to secure part of its fruit supply from these growers.

In addition to the hygiene, health and safety training that employees have received, they’ve benefitted from a significantly improved working environment. Capital investment has enabled MLE to equip the lychee station with toilet blocks, washstands, locker rooms, and personal protective equipment, to ensure that it meets health and safety standards.

The process of improving standards has also required the recruitment of new staff. MLE has created 50 new jobs and provided hundreds of hours of training to these new employees to enable them to do their work.

The strategy to professionalise MLE has resulted in both developmental and business benefits. The business has been able to reinforce its credibility amongst its European customers, upskill and empower its suppliers and staff, and ensure its long-term sustainability.