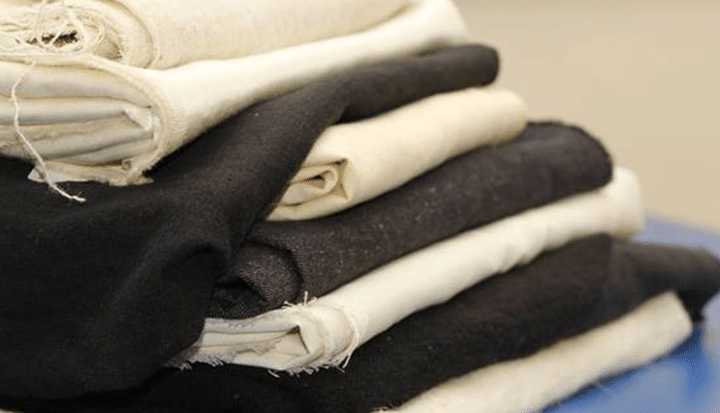 
Cotton. You love it, I love it, but Mother Nature freakin' hates it.

About 20 million tons of cotton are produced each and every year, making it far and away the world's most profitable non-food crop. But it's resource intensive in a big way.

It takes about 20,000 liters of water to produce just one kilogram of cotton. To put that in perspective: The average American drinks about 214 liters of water per year, which means you'd have to live into your early 90s to consume as much water as a single T-shirt or pair of jeans. There's also the issue of chemicals. A combined 35 percent of the world's insecticides and pesticides is applied to cotton plants, which grow on less than 3 percent of the crop land on Earth. Runoff can destroy sensitive ecosystems, even if chemicals are "properly applied according to technical instructions."

Fashion's dependence on cotton has led to a monocropping problem in India, the world's second-largest producer of cotton, behind China, and one of the worst environmental offenders in the apparel industry.

But a quick fix might be found in the non-psychoactive plant in the cannabis family, hemp.

Hemp is not only a textile-ready natural fiber, it is also UV resistant, antimicrobial, and requires less water and pesticides than the cotton plant. "It's so high value and so much lower impact in every other way that it eclipses the carbon generated through shipping," hemp clothing line founder Isaac Nichelson told the Los Angeles Times in 2010.

What's more? Hemp grows wild on the Indian landscape. Imagine what could be possible if the plant were cultivated with the same attention cotton receives.

"Hemp is the most underutilized natural fiber crop in India," social entrepreneur Sanvar Oberoi said. "Hemp belongs to central Asia. The entire Himalayan belt--Tibet, parts of China, parts of northern India--is home to the world's largest wild cultivation of hemp yet our economy has literally less than 0.1 percent of the global market share. There's literally no industry."

Hemp as a substitute for cotton and polyester was social entrepreneur Sanvar Oberoi's vision for founding the Bombay Hemp Company (BOHECO). It could be a life-saving shift, for some. Organic cotton has given up ground to cotton hybrids--local seed varieties have been replaced by genetically modified seeds from companies like Bayer CropScience, which demand more water and nutrients which, given soil depletion, must come from more chemical fertilizer. Higher-than-ever prices for farming inputs have hit growers hard, despite better yields. More than 270,000 farmers have committed suicide since 1995 after falling into "unmanageable debt."

Given the human cost of cotton, a move to hemp is more than sensible. Demand for natural fibers is being driven by eco-conscious brands like Stella McCartney and Levi's, which already incorporate hemp into clothing lines. Yet, a lack of hemp supply is a key bottleneck to larger scale adoption by the apparel industry, according to Oberoi. Despite hemp's native plant status in India, the country's government has banned industrial hemp production since the 1980s.

In a shock move, however, the Indian government has granted BOHECO an exception in an effort to jumpstart the country's natural fiber industry. Oberoi is currently working with research institutes to breed new seed variants that will allow for large-scale hemp production. BOHECO is also helping to craft the legislative environment to allow other players in the subcontinent to join the push for a more sustainable apparel industry.

Poverty alleviation is just as important as the environmental benefits of BOHECO's sustainability outfit. Oberoi's team is training women in rural villages along the Himalayas to produce hemp fabric for the apparel industry on their very own farms. This saves them the trouble, and time, of having to hike to the Indo-China border and hump bales of hemp back to their villages.

"Agriculture is one industry where the gap in per capita income between the first entity in the value chain is significantly lower than the one in the second and third, for example. The disparity between what a farmer makes versus what a mill or processing company in the middle makes can be as great as 92 as to 8," Oberoi said.

That's not to mention the stark contrast in profit margins when you consider the sometimes outrageous prices tagged to merchandise at retail outlets around the world.

"The hemp fiber becomes yarn, the yarn becomes fabric, and then we connect women hemp entrepreneurs to buyers," Oberoi said. So far, BOHECO and its network of Himalayan producers have created a shoe, which has generated interest from Internet has-it-all retailer giant Amazon, as well as T-shirts which are just as comfortable as anything made from cotton--hemp is no simple, scratchy marijuana fabric. New technologies are emerging that soften the fibers and stand to place hemp fabric in direct competition with cotton.

"The biggest change that we want to see, other than increasing per capita income, is to change the status quo of farmers and rural artisans in India, very often women," Oberoi said. "The way our social pyramid is structured today, farmers and people who work in agriculture are at the bottommost rung, which is not fair: they're some of the noblest people on the planet, because they're providers."

Attitudes around alternative fabrics are changing because of greater recognition of the apparel industry's negative impact on the developing world and the millions of people it employs. Unfortunately, legacy pressure from the U.S. government's (unwinnable) war on drugs caused countries like India to prohibit regular hemp cultivation and research.

If hemp were to be taken seriously by both industry and government, it could replace thirsty and chemically-intensive fibers like cotton, reducing the environmental costs of fashion and creating a budding but profitable textile market. More fair compensation for small-scale farmers and artisans would be a boon to rural communities. The planet would smile, too, because eco-friendly apparel should always be in style.

For more on sustainable fashion solutions, visit Fabric of Change: Innovating for a Sustainable Apparel Industry.