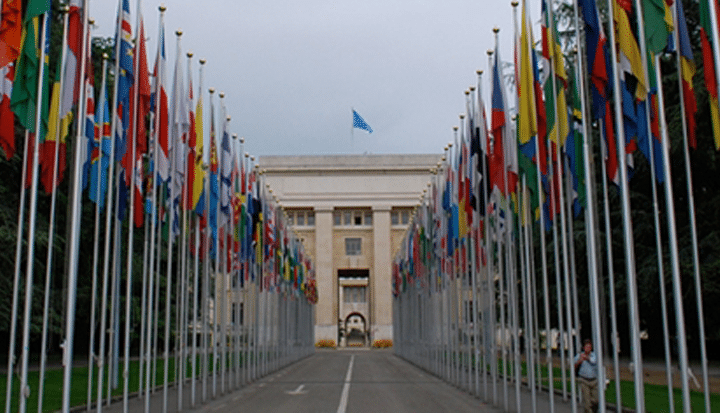 
I couldn't help but marvel at it – the rows of colourful country flags lining the approach to the UN’s Palais de Nations in Geneva. Such an iconic image, symbolising global unity over principles of peace, security, cooperation and respect for human rights.

For those unfamiliar with this framework, it is supported by three strong pillars; Protect, Respect and Remedy. The guidelines outline the state’s responsibility to protect citizens against human rights abuses. They describe the role of business in respecting human rights within their operations. And they state that both parties share responsibility for providing remedy, where rights violations occur.

Like our fellow labour rights organisations, ETI embraced the UN Guiding Principles from the outset. The focus on understanding company supply chains, and on undertaking human rights due diligence, is right up our street (if you pardon the colloquialism). In particular we champion the guiding principles through our programmes, which aim to collectively address the root causes of workers’ rights issues by taking a ‘whole supply chain’ approach.

So we were thrilled to be invited to host one of the Forum’s side panel events. This was an exciting opportunity to share how we’ve been putting the UN Guiding Principles into practice, from the perspective of our company, trade union and NGO members. That’s how on Monday 1 December, I found myself walking past these glorious flags to host our session inside the Palais des Nations.

Brand engagement with the Cambodian government over workers’ rights issues was our first case study. This is a very recent example of how companies can play a role in helping states uphold their duty to protect human rights. Philip Chamberlain, Head of External Stakeholder Engagement at C&A, was part of an ETI-supported delegation of brands and trade unions that met with the Cambodian government earlier this year. The group articulated support for the Cambodian textile industry and the shared need to address human rights issues. He said this engagement had helped pave the way for two important outcomes – suspended sentences for 23 detained Cambodian garment workers arrested during protests at the start of the year, and a 28% raise in the monthly minimum wage. Some key lessons learned were that the government was prepared to listen and respond, business leverage can be effective, and that the best approach is as part of a multi-stakeholder group.

Meena Varma, Director of Dalit Solidarity Network UK then presented a case study on the Respect pillar. Her organisation campaigns to put an end to caste discrimination worldwide, highlighting the issues facing Dalits in India, who are so often an ‘invisible workforce’. Meena looked at ETI’s programme in the Rajasthan sandstone sector, where she lends NGO perspectives and insights into the issues facing workers in this arid Indian state. Our programme engages directly with stone processing factories and key local stakeholders, working alongside industry to strengthen its capacity to deal with business and human rights issues. Meena highlighted some of the early insights from our work, where we have seen a shift in attitude from within the industry, and greater willingness to work with civil society to tackle existing workers’ rights issues.

Our final case study was presented by Monika Kemperle, Assistant General Secretary at IndustriALL Global Union. IndustriALL played a pivotal role in establishing the Bangladesh Accord on Fire and Building Safety, which now has more than 180 company signatories. It was established in response to recent industrial accidents in Bangladesh’s garment sector, most notably the Rana Plaza collapse and the Tazreeen Fashions factory fire. But Monika’s main focus was to highlight the process for establishing an internationally recognised remediation fund for victims, and the detailed discussions between brands, unions and NGOs. The Rana Plaza Donors Trust Fundwas finalised in January this year, and many international brands have contributed donations to it. Monika called on further support from brands and retailers, to help workers and their families that have lost so much. A wider call to increase victim access to remedy was also made during other Forum sessions.

For ETI, the UN Forum on Business and Human Rights offered an opportunity to share some live examples of putting the UN Guiding Principles into practice. It was a chance to fly the flag of Protect, Respect and Remedy, and highlight its significance for workers’ rights. We don’t have all the answers yet, but neither do we expect to. We welcomed some challenging questions from the audience, such as whether labour rights is too narrow a lens through which to view business’ broader human rights obligations. Trade union colleagues in the room commended collaborative, multi-stakeholder efforts, but lay down the challenge to companies to not lose sight of their individual responsibilities. There was much food for thought. We hope the audience came away a little more informed about what’s possible, and what lies ahead.

As I left the conference to journey home, I felt the need to linger once more in front of those UN country flags. It was a murky December afternoon, grey and windless. Each flag was perfectly motionless, marking out its own territory. Yet it wasn’t the singularity that was so transfixing. It was the bright sea of colours, the stately lines, and the proclamation that a better world is possible, together.

Editor's Note: This blog was previously published on Ethical Trading Initiative and is reproduced with permission.
Previous postNext post

One response to “Flying the Flag – Protect, Respect, Remedy”