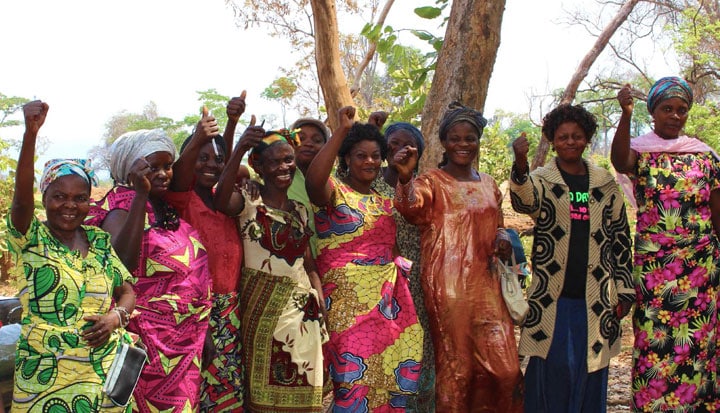 
Historically there’s been limited evidence on what works to genuinely economically empower women in DRC’s agricultural sectors. But, thanks to ÉLAN RDC’s WEE Learning Series, that’s now starting to change.

Women and working-aged adolescent girls in DRC are some of the most marginalised in the world. Disproportionately high rates of poverty, inadequate access to basic services including education and health care, restricted access to – and control over – economic assets, and limited influence over decision-making at all levels constitute just some of the barriers facing women and working-aged girls in the DRC. Working women are visible almost everywhere in DRC – from labouring small land plots in Congo’s vast rural plains, to selling bread in the streets of Kinshasa. But it is rare for women to genuinely transform their lives through these small-scale, income-generating activities.

ÉLAN DRC wants to change this. This market systems programme, funded by the UK Department for International Development, aims to increase women’s incomes and support them to progress into more beneficial roles within value chains. ÉLAN RDC does this by recognising poor women’s particular disadvantage in accessing and benefiting from economic opportunities and facilitate changes to gender-blind and/ or discriminatory behaviours of the private sector.

To better understand the impact the programme is having on poor women, ÉLAN DRC has launched a Women’s Economic Empowerment Learning Series, comprising several case studies, the first of which explores empowerment outcomes for poor women participating in commercial maize production in the region of Haut-Katanga.

Agriculture accounts for 42.5 per cent of the DRC’s gross domestic product; and employs 84 percent of its women[1], albeit concentrated in subsistence farming. In 2014, ÉLAN RDC formed a partnership with a commercial maize farm in Fungurume, Haut-Katanga called Mbeko Shamba to address constraints to farmer’s productivity, and jointly work to explore the commercial case for recruiting women as contract farmers and moving them into cash-crop industries.

The programme recognised the potential for the intervention to additionally support female farmers adopt more beneficial roles, through the formalisation of employment, sustained opportunity for capacity development, improved working conditions, and progression into cash crop industries. While the number of female farmers working with Mbeko Shamba was very low prior its partnership with ÉLAN RDC, the farm did have some awareness of the potential incentives for employing women as contract farmers, having worked with them in the production of vegetable crops.

Through mixed-methods research, ÉLAN RDC discovered a series of influential findings that can help to shape future women’s economic empowerment initiatives within DRC.

So, what did we learn?

The widely held belief in DRC that women have lower productivity levels has been challenged. The pilot with Mbeko Shamba in fact revealed compelling evidence of women’s greater productivity levels in non-perennial agriculture, with women producing 5,500kg maize per hectare, vs 5,100kg for men when provided with the same inputs. In fact women benefitted disproportionately from the intervention (baseline: men’s average yield = 1,970kg; women’s average yield = 1,082kg), therein levelling the playing field between men and women. This served as convincing evidence for the farm to prioritise the recruitment of women as contract farmers the subsequent maize season. In 2015, Mbeko Shamba recruited all female applicants: comprising 31.7% of total contract farmers, and in 2016, 60% of new recruits were women.

Another key finding was that the participating female farmers commonly retained the income they earnt at Mbeko Shamba. The importance of this goes further than economic freedom, women are also using their income for complex entrepreneurial activities to further their economic opportunities. By investing in goods that offer continuing returns, women are now buying land and building additional housing to realise rental incomes.

Aside from productivity gains women are also benefitting from working conditions and time savings. Improvements in agricultural technology allow more productivity at the workplace and in some cases a reduction in hours as a result of mechanisation. “Here we were work on pulling roots, but with mechanised labour, we are freed up from the month of November, whereas if we were to do this by hand it would take three months. From now until the end of the planting season, we can take care of other work, which contributes to the wellbeing of the family.”

One of the most important findings, is through their engagement in commercial maize, women have expressed increases in respect and dignity. “It’s us the women who have gained from this work [on Mbeko Shamba]. We have become respected. Before, I was poor but now the community no longer looks at me as they did before. I used to sleep on a bed without a mattress, now I sleep with a mattress. I was a women without value, but now they respect me in the village.”

Reaching out through research

In 2016, over 43,500 poor women increased their income as a result of ÉLAN’s collaboration with private sector organisations. If we can learn lessons such as these in a country’s pivotal economy, then how many other women can we economically empower across the globe? This International Women’s Day – #BeBoldForChange and let’s eliminate the persistent gender gaps standing in the way of healthy, sustainable development.