Education is Key to Fighting Malaria 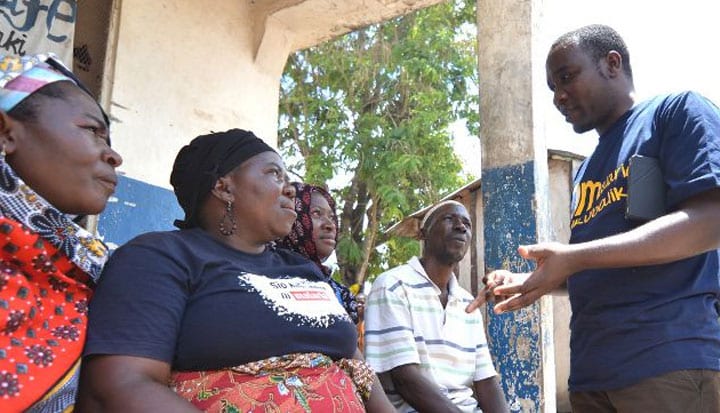 Education is Key to Fighting Malaria


As Head of Programmes at Tanzania Communication and Development Centre (TCDC), funded by Comic Relief and GSK, Jacob Macha is on the frontline of the fight against malaria in Tanzania, delivering a multi-pronged approach to malaria education and prevention to help to stamp out the disease once and for all.

Malaria is a major public health concern in Tanzania, with children under five and pregnant women most at risk. Some do not take action to prevent the disease, or fail to seek help for symptoms. Others do not trust test results, or stop taking malaria drugs when they start to feel better, without completing the dose. Through the Comic Relief and GSK Partnership, Comic Relief awarded TCDC a grant to communicate life-saving malaria messages, which dispel malaria myths and promote positive care-seeking behaviours, to communities in Kagera and Kigoma districts.

Jacob knows that it is vital that TCDC’s educational messages about malaria treatment and prevention reach all corners of society, as using a mosquito net is only one part of the battle. Today, on World Malaria Day, Jacob tells us why now is the time to keep up momentum in the battle against the disease which still claims a child’s life every two minutes.

In collaboration with the Ministry of Health and other partners, at TCDC we have taken a lot of different initiatives to combat malaria in Tanzania through communication. We are using mass media in terms of hosting radio and TV shows, mobile video cinemas and road shows.

We are using community engagement by working with local NGOs to train community health workers, which we call community change agents or CCAs. We have many of these community change agents in Kigoma – more than 100. They are doing an important job because they are the ones who are working very closely with communities and they have day-to-day interactions with community members. We want to make sure that community members are well engaged in terms of the fight against malaria, so they understand the benefits of making sure that they are preventing malaria in the first instance, rather than treating malaria which could be really expensive.

To do this, the CCAs meet with community groups, women’s groups, groups of farmers, fishermen, tailors and different community groups in their neighbourhoods. The CCAs work to educate the groups about malaria prevention and testing and treatment and then help to mobilise the groups to go and talk to households and people around them to spread the word about protecting themselves from malaria.

They are doing a great job in not only making sure that there is malaria awareness but also creating demand for malaria testing and treatment, and encouraging people to prevent themselves from malaria.

We feel that working with CCAs is one of the best approaches because they are coming from their own communities. We have seen a lot of positive changes and now awareness of malaria is very high. We are seeing more people taking the initiative to go to health facilities for testing and we have seen a lot of changes in terms of malaria reduction – countrywide now we are looking at 14% prevalence but it used to be more like 20%. We believe now is the time we need to push more, as people now understand what needs to be done, but we need to push them even harder.

With the Comic Relief and GSK partnership, we feel like it’s going to help us a lot in terms of the fight against malaria. We have seen that awareness is very high but we feel like the funding will help us move more towards behaviour change.

We want people to be engaged. We want people to take action in terms of the fight against malaria. We want to make sure they understand the importance of joining the fight and it shouldn’t be a fight you do only alone. You need to work together with the community members and fight malaria together.

We believe that now is the time we need to push more. Now people understand what needs to be done but we need to push them even harder for them to start taking the initiative to help themselves.

I find what I do rewarding because I know the more efforts we put into this in one way or another, we will be saving lives of more people, more children and pregnant mothers. It is so fulfilling when I go out to the villages and hear people say because of our campaigns they were able to save their lives and their children's.

TCDC is funded by Comic Relief and GSK who have joined forces to help fight malaria and strengthen health system in some of the world’s worst affected countries. Find out more at comicrelief.com