Creating a Climate for Risk and Innovation in Humanitarian Delivery 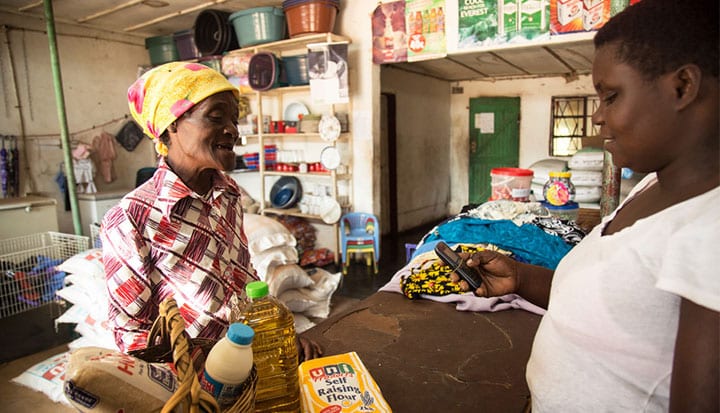 
How CARE International empowered rural families in Zimbabwe through the delivery of humanitarian aid in partnership with private sector mobile network operators ECONET and NETONE.

In August 2015, CARE International, in partnership with World Vision, started a Cash Transfer Programme in Zimbabwe, funded by the Department for International Development (DFID). The programme ran until 31st May 2017. It is the first time humanitarian aid has been provided at such a large-scale through mobile money in Zimbabwe. It was delivered following a severe drought in four provinces, and was operating successfully even when there was a nationwide liquidity crisis. The programme was a partnership between NGOs CARE International and World Vision, and telecoms companies Econet and NetOne. The mobile companies transferred money to registered beneficiaries on the EcoCash (Econet) and One Wallet (NetOne) mobile money platforms.

When we started the programme the market, in terms of cash and liquidity was functioning normally. It was really up to the individual whether they wanted to pay for goods using their phone, which we call the e-wallet, or collect their cash, which we call cashing-out . Then the liquidity crisis hit in June 2016. There was a shortage of hard cash, which introduced an additional challenge for the programme. As an organisation we responded jointly with our partner mobile network operators to teach beneficiaries how to get what they needed without cashing-out.

Each beneficiary was given a SIM card at a reduced rate, and their line was registered on the mobile cash wallet platform. They received a monthly payment of $5 per household member, rising to $7 in August 2017. A total of $44.6 million was transferred over 22 months to 73,718 households or 400,279 individuals.

One of the most common challenges was people not knowing how to use their phone. We designed monthly training sessions to teach people how to use the e-wallet. We worked with the mobile network organisations and looked at the frequently asked questions around how to use their platform. We developed training materials in local languages: Shona, Ndebele and Venda. This built their knowledge and transformed their attitudes towards mobile money.

I found that at first most people would prefer to buy from specific shops that they trusted. The shopkeeper played a key role by helping clients shop using their mobile phone. With time, because of the knowledge gained through training, people found it easier to buy from other registered merchants.

We now see more people using their phone to make purchases, as opposed to cashing-out. By the time we closed the programme we were looking at almost 70 per cent of our clients preferred phone transactions, and 30 per cent still preferred to cash-out. Of course, the lack of physical cash as a result of the liquidity crisis also generally propelled this push. However, we could argue that our beneficiaries were better prepared for this transition to e-transactions, as they were engaged in using mobile money before the onset of the liquidity crisis.

With the introduction of Ecocash there was a transformation in the rural markets because people would go and buy food from local businesses using their phones. Before the programme the level of money flowing into rural communities was minimal because people would barter or receive remittances from friends or relatives. We learnt that e-wallets offered people a choice in how they spent their money. When funds are transferred to people’s phones, it’s up to them whether they want to cash-out, buy from registered merchants, or save it for the future.

With funding from The Department for International development (DFID), the programme has been a great success. People used mobile money for school fees, milling charges, and even sending money to relatives, although as predicted, the vast majority of beneficiaries (87.5 per cent) used the money to purchase food.

A report by Oxford Policy Management found that cash transfers significantly boosted access to food. Families were able to eat more, and to choose a healthier, more varied diet. The report shows that the programme reduced hunger by significantly increasing the number of meals children were able to receive per day (from two meals a day to three a day), and reduced the frequency of severe food deprivation by 23 per cent across all targeted provinces.

It was reported in phase one of this programme that in October 2015, 12 per cent of families were suffering severe hunger, and 51 per cent moderate hunger. By June 2016, none were suffering severe hunger, and only 10 per cent moderate hunger. The report concluded that cash transfers by mobile phone, as opposed to food donations, are an effective way of delivering aid to vulnerable communities. People are empowered to decide for themselves how best to spend the money – so aid is delivered in a way that maintains people’s dignity.