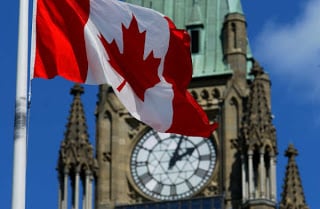 
Having won the Oval Office, the Obama volunteer revolution is just picking up speed. Due to financial constraints, Corporate America intends to grow their volunteer efforts by a whopping 45%. From Washington DC to Mumbai; London to Dubai, volunteer activity is on the rise. Communities endorse it. Companies infuse it. Governments champion it....Except Canada. With no national policy or formalized system, Canuks are living in the stone age of civic duty. Why? Good question.

By now it is well known that President Obama is a fan of volunteering. During his campaign, he engaged volunteers with such effectiveness that he essentially stepped into the Oval Office out of nowhere. With 8 million volunteers mobilized for the campaign (not to mention his 4 million fans on Facebook alone), Obama rewrote the playbook on presidential campaigns. Now, you can follow President Obama on Twitter - and he’ll follow you back. Volunteerism continues to show up as a key ideology and pertinent strategy within Obama’s fast-paced presidency. (The Third Sector can also learn from Obama’s approach to volunteeri...

But that’s the United States of America.

Canada, it seems, is a bit more conflicted when it comes to the validity of volunteering.

The Federal Government recently announced that it would not support federal employees as v... at the 2010 Winter Olympics being held in British Columbia. This is in contrast to the Province of British Columbia’s policy which allows up to 200 government employees to volunteer utilizing paid vacation and paid leave in a 50/50 split. It seems British Columbia believes that both government and taxpayer come out way ahead in this arrangement. Advanced Education Minister Murray Coell explained, "It's really sort of an education for our staff, a free experience that they then bring back to the workplace.” Coell continued, "There is a benefit to taxpayers in the long run and to the public service, because employees have more skills."

Well that sounds just about right, doesn’t it? I mean this what everyone, including the Canadian government, talks about when it comes to the benefits of Corporate Volunteering programs. Recruitment, retainment, engagement and skill enhancement are just the beginning of the rewards that business can reap by supporting the volunteer work of their employees. Oh, and there are also the benefits of strengthening the community and the overall social fabric of the nation.

Surely the federal government of Canada not only supports volunteerism, but actually has mechanisms in place to facilitate the practice thereby leading the nation by example?

In fact, the federal government found no appreciable benefit to volunteering at the Olympics for government employees. In a memo on the issue, Treasury Board secretary Wayne Wouters states, "As the steward of taxpayers' money, we have to strike a balance between employee benefits, responsible management of public funds, and continuity of service to Canada.” The balance apparently translates to, “nope”, “no-way” and “never.”

And if this is you, I hope you don’t ever expect to walk out of where you are into places of great leadership.

Last week, Justin Trudeau delivered his first speech in the Canadian House of Commons. The son of one of Canada’s more famous Prime Ministers, Pierre Trudeau, Justin in fairly new to Parliament, having been elected in 2007. The speech, and the legislation that was tabled with it, concerned the formation of a national policy on volunteerism.

In his speech, Turdeau proclaimed, “The opportunity to invest in our communities and non-profit organizations, that do such a tremendous job already of helping out Canadians in times of need, is extraordinarily important. We need to make sure that our community organizations and the charitable entities, that work so hard to help out our seniors, youth, people in difficulty, working families or single mothers, receive stable sources of help.”

Speaking from a decidedly ‘youth’ perspective, Trudeau was imploring the House of Commons to begin investigating best practices from around the world that will facilitate and promote volunteerism in Canada. He believes such a framework will, “give young people a choice, many choices. They could see how they would like to serve and there would be a framework to approve the provinces, municipalities, NGOs and charitable community organizations, which would then find volunteers—young Canadians who perhaps live in that community or who perhaps come from the other side of the country—to provide all Canadians with the services that are so well delivered by community organizations.”

And herein lies the conflict: Young innovative leaders are poised alongside citizens, ready to change the world through mass mobilization, namely volunteering. Opposing them are the old, crusty guard, suspicious of the citizens who are wasting the nation’s time on frivolous and idealistic endeavors, namely volunteering.

When asked why the federal government felt they could not allow civil servants to volunteer, the response was something akin to, “Well, if we let people volunteer this time, then we’ll have to let everyone volunteer.” Good grief, that’s the answer of a parent who doesn’t have good rationale for a question from a child - a classic example of the continuum fallacy.