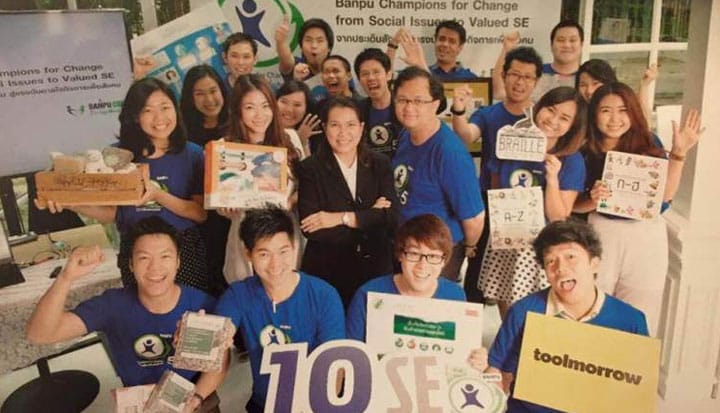 
In South East Asia, 95% of coral reefs are endangered. In Thailand the richest quartile of the population own around half of the country’s income, whilst the poorest quartile have less than 10%. Only 38% of the population are educated to a secondary level and social and environmental problems are rife.

The Thai Social Watch Report 2016 described the situation in Thailand as a “development trap”. The report describes increasingly aggressive development plans to facilitate “the provision of resources, fuel, energy and transportation to the industrial sector and urban areas”. This short term focus on excavating land resources is driven by transnational companies with little stake in local areas. As a result the resilience and self-reliance of many local communities is being eroded, not least by unsustainable new labour structures.

One social enterprise incubated and supported by the programme is called Local Alike. They promote community based tourism for the preservation of local culture of native people while providing economic opportunities that create livelihoods. Youth in these remote communities are engaged to become leaders in developing community capacity to operate sustainable tourism programs. It provides platform and agency service to link the communities with the sustainability-focus tourists. It now works with over 50 communities across Thailand.

ToolMorrow is another innovative social enterprise supported by ChangeFusion. The organisation uses social media, particularly viral videos, as a tool to creatively communicate social problems, particularly issues facing youth such as life skills and sex education, to youth audience. It has generated over 5 million views with over 150,000 followers on social media channels.

The projects supported by ChangeFusion have a wide array of focuses beyond economic empowerment. The New Heaven Reef Conservation Program (NHRCP) is directed at environmental action, in particular the preservation of coral reefs. Over the last few months bleaching, dying reefs have been increasingly prominent in world news. The bleaching of the Great Barrier Reef in Australia caused international outrage and concern around climate change. Utilising a social enterprise model NHCRP has operated a diving school to fund the construction of 20 artificial reefs and 100 small habitats.

ChangeFusion plays a critical role in growing an eco-system of small innovative enterprises to challenge the enormous social-environmental problems of South Asia. The challenges faced by young enterprises are not insignificant. Frequently founders, especially those from low income communities struggle to access capital, networking and mentorship opportunities. Sunit Shrestha also seeks to challenge the low profile of social sector based jobs in Thailand and East Asia. In a world where commerce and finance provide stable career choices, Sunit Shrestha is seeking to establish social enterprise as a viable and attractive option.

Shrestha’s mission to create a thriving solution-orientated social sector goes beyond grass roots activism – he also works at a structural level. Aware of the limited financing options for social enterprises in Thailand, and the complexities of legal frameworks, he is working with the Stock Exchange and various policy makers in order to create mechanisms and foundations for a long term change. He has also setup a social investment holding company in Thailand to invest in young social enterprises. With For Kon Thai Foundation and BBLAM, a fund management company under the Bangkok Bank, Shrestha has launched Thailand's first socially responsible investment mutual fund with a built-in venture philanthropy mechanism to support social organisations. The fund size is currently $45 million. He is also active in the formation of social enterprise support organisations in Southeast and East Asia that are collaborating to grow young social entrepreneurs across the region.

This article first appeared on Virgin.com and is reproduced with permission.

Sunit Shrestha is an Ashoka Fellow and an Ambassador for the UBS Social Innovators Programme, run in partnership with Ashoka – a global search and support package for social entrepreneurs looking to scale their impact through social business and social investment. To apply to the UBS Social Innovators Programme, click here or follow the conversation online by searching #UBSInnovate on Twitter.