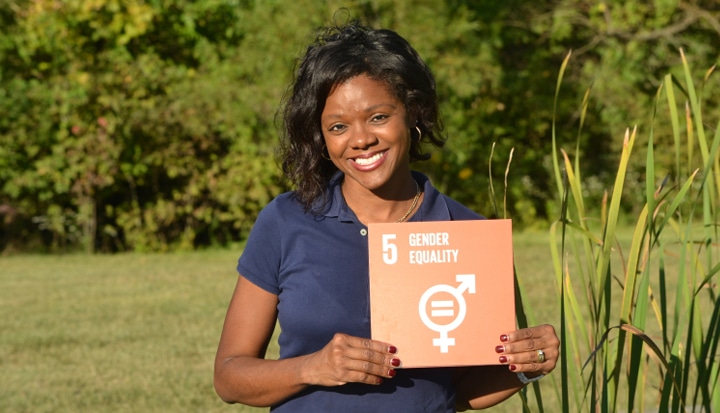 Gender equality is so much more than a women’s issue. It’s a sustainable development issue. Women’s empowerment not only has positive effects for local economies, but it is a predictor of better health outcomes and all but guarantees a more fair and stable society.

This is not breaking news. But it is just one half of the story, as United Nations Special Envoy on Global Education Gordon Brown has explained: “Almost unnoticed, one of the great civil rights struggles of our times is being fought out in our midst. Across the Indian subcontinent, in Afghanistan and in Africa, supporters of universal girls’ education are being threatened, assaulted, bombed and murdered.”

That’s because education is the key to progress. “There’s no force more powerful to transform a society,” Nicholas Kristof argued in The New York Times, which is precisely why extremist groups target educated girls and their advocates.

Nigeria, home to the Boko Haram insurgency, fell 12 places in the most recent Global Gender Gap Index. Now ranked 118th out of 142 countries by the World Economic Forum, Nigeria is among the 10 lowest ranking countries for equal enrollment in primary and secondary education. Minority Hausa-speaking girls, for example, are 35 percent less likely to attend school than Yoruba-speaking boys.

There is a silver lining: The world’s seventh most populated country is also home to a growing number of girls who want to change their communities for the better and women with the skills to pay the bills.

Helping the next generation of educated and empowered women is Njideka Harry, founder of Youth For Technology Foundation (YTF), which enables problem solvers in rural communities take command by connecting them to tech tools and training.

Harry has been in the business of gender equality for 15 years. She believes that access to technology, like education, is a basic human right. And that educated girls with essential tech at their fingertips can change the world, fast.

“Africa is a continent full of extremely brilliant people. Talent is universal but opportunity is not,” Harry said. “My vision for the foundation was simple and it still is. It’s to bridge the digital canyon between young people in developing countries, specifically marginalized girls and women, and those in the developed world.”

It’s a canyon that Harry herself was forced to bridge in 1993. She was born and raised in Nigeria, but moved to the United States for college. Having always used a pencil and pen for schoolwork, Harry found herself “overwhelmed” by the regular use of computers at the university level. Just six years later, Harry was on the business development team at Microsoft, after a short stint with General Electric. But within her first month with the software giant, she felt compelled to try and solve the gender gap that had affected her so deeply back home in Nigeria.

Today, Harry’s foundation also operates in Kenya, Uganda, Cameroon, and Colombia. While YTF equips women with business skills and financial capabilities training, the focus remains on empowering girls between the ages of 8 and 25—many of whom are out of school.

Lessons vary, depending on the demands and interests of participating girls, but generally combine digital literacy, hardware and software development, and life skills like communication, empathy and teamwork. “Even when our instructors teach programming languages like C++, Scratch and JavaScript, the class is followed by hands-on practice to make courses ‘stick,’ ” Harry said.

And girls are eager to be tested in the real-world as soon as they feel ready. Each year, hundreds of girls hit the ground running on real assignments in the field, conducting research or sharing best practices with women smallholder farmers, who prefer to work with young women.

YTF is special because it gets buy-in from the very same actors that, directly or indirectly, keep girls and women out of school: politicians, school administrators, traditional tribal leaders, and churches that, according to critics like journalist Sisonke Msimang, “systematically preach female subservience.” Program managers also make sure to sit down with parents and guardians to explain the benefits of having their daughter design models that can be produced with 3-D printers at YTF community centers, instead of at home doing chores or taking care of family.

“A girl is questioned, even told she’ll never get a husband, if she’s studying science,” Harry said. “But the girls we work with are innovating and designing and empathizing and building real products in a safe place. They’re learning math and science in a fun and exciting way. And communities begin to see girls as agents of change.”

The training is rewarding. More important, it properly prepares girls to enter the workforce with the skills they need to succeed in the 21st century. Eleven million people are set to enter Africa’s labor for every year for the next decade and already almost every job today has a digital component. Education experts predict that by 2030 most of what students learn will come from online sources.

There are 62 million out-of-school young women around the world, nearly half of whom will never enroll. But programs like Youth For Technology are shifting girl power into real power.

“We have touched the lives of 1.75 million people in five countries and 97 percent of girls who come through our doors say they want to help people and change the world,” Harry said. “We’ve just scratched the surface. There’s so much more to do.”

This story is part of a series which spotlights leading young innovators to support the Unilever Sustainable Living Young Entrepreneurs Awards, launched by Unilever in partnership with Cambridge Institute for Sustainability Leadership and in collaboration with Ashoka. To find out more about the Awards. To follow the conversation on Twitter, search #GlobalGoals for a #BrightFuture.

Editor's Note: This blog was previously published on Virgin Unite and is reproduced with permission.
Previous postNext post