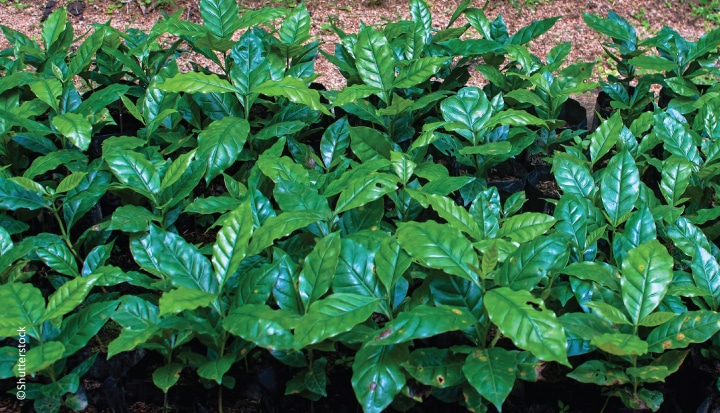 VSO volunteer Joseph Ochuma is an Agronomist working with Karagwe Development and Relief Services (KADERES). KADERES is an NGO based in the Kagera region of North West Tanzania. Joseph started his current placement in 2012, although he was not new to VSO having previously volunteered at VSO Malawi working with the Ministry of Agriculture.

KADERES have established a business wing for registered farmers called Kaderes Peasants Development (KPD) so that they can focus on support for poor and marginalised smallholder farmers through the NGO while using the business wing to grow the coffee sector and improve the overall economy of the area.

Working with KADERES as an Agronomist, Joseph’s focus has been on the delivery and development of extension services so that farmers are supported during all stages of production including post-harvest. His focus has been on coffee, but he has also advised on other horticultural crops.

When Joseph first started at KADERES he was delivering a lot of extension support himself. As a result of the Accenture funded Improving Market Access for the Poor project (IMA4P) Joseph has been able to work with his colleagues at KADERES to develop an extension worker system and lead farmer model as a means of disseminating knowledge and information to local farmers. There are now 50 lead farmers, 8 of which are female, who are supported by 9 extension workers. This pyramid system means that Joseph can train the extension workers and at least 10 lead farmers at a time, and then each lead farmer is able to go on and share the training within their own (often remote) communities, reaching around 75 local farmers each.

A typical day for Joseph

During the rains, when farmers are planting, Joseph spends most of his morning in the field with the farmers and extension workers. In the afternoon he returns to the office to write up his notes and work with his colleagues.

Joseph has conducted many training sessions with the extension workers, inducting them on the mission and aims of KADERES and KPD, and training them on their roles and responsibilities. The extension workers offer their support and services primarily to members who are registered with KPD, but they also offer services to non-registered farmers so that more people can understand the benefits of being part of the company and decide whether they would like to join.

Benefits of the IMA4P project

Joseph has seen the IMA4P project increase farmers’ interest and participation in joining training sessions. He explains ‘they are very interested in market based projects – they want to learn how to get better prices for their products, and they want to understand the role they play in the whole market system’.

The lead farmer system has had a significant impact; Joseph is able to reach community farmers much more easily through the lead farmers, meaning that more people are getting access to crucial information to improve the quality and quantity of their coffee production.

Joseph has also noticed that farmers are less prone to emergency financial problems than they used to be, and when emergencies arise they are better able to deal with them. This is because they are able to use savings and support systems rather than looking for handouts from KADERES. He explained that farmers used to fear taking loans; ‘Now, after receiving entrepreneurship training, the farmers are clearer about how to invest loan money and make it work for them. They welcome loans and actively look for credit as they see this as a way to develop their businesses.’

A key challenge in the area is engaging young people to take up farming as a profession. Joseph has been working with KPD to run entrepreneur training to highlight the benefits of taking up farming as a business, and encouraging them to follow organic and Fairtrade practices which see a higher return on investment. 14 of the lead farmers that have been recruited are young farmers which he hopes will encourage more peer to peer engagement. He says ‘as they start to see their neighbours earning through coffee production and investing in trucks, motorbikes and taxis more young people are starting to come forward to engage in farming as a business’.

Challenges in the region General challenges in the area include pests and diseases, especially when working to organic standards, but Joseph is trying to overcome some of these challenges by training the extension workers and lead farmers on good organic herbicides and disease prevention techniques. The lead farmers will then share this knowledge within their communities. The coffee trees in the area are starting to get very old, but again, through his training and interaction with the farmers Joseph has been encouraging farmers to gradually plant new trees to replace the old ones over time.

Overall, Joseph feels happy with the way that IMA4P resources have been utilised, and hopes to be able to extend the extension worker and lead farmer system further as KPD membership increases.

Joseph’s dream Joseph’s dream is for poor smallholder farmers to have more equitable access to the coffee value chain, and for them to sell more of their coffee directly to export companies like KPD. By doing this the coffee farmers would receive more profit compared to selling via local middlemen.

For example, Joseph recently met one young farmer (around 17 years old) who had prepared a bucket of coffee to sell to a local middleman rather than drying it himself and selling directly to KPD or another exporter. He was due to receive 7,500 Tsh (just under $3.50) for the bucket, but if he had dried it and sold directly to KPD or another exporter he could have received 16,900 Tsh ($7.75).

Joseph explained to him that if he joined KPD he would receive training on how to dry the coffee, and how to receive more profit as a result.

Joseph explains ‘If I could see the farmers selling their coffee on more equal terms, and significantly reduce the practice of selling to middlemen, I would leave my placement a happy man!’