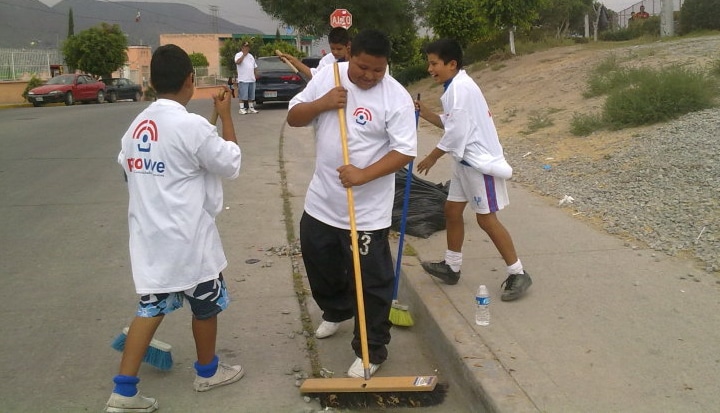 
Miriam, 43, lives in Cañadas del Florido, a low-income neighborhood in Tijuana, Baja California, the northernmost state of Mexico. Three years ago, on any given day, Miriam and her three children would watch criminals, drug addicts, and vagrants frequent the empty house next-door. Their streets were littered with garbage and dead animals. This is not an uncommon situation in the Mexican neighborhoods, or fraccionamientos, where more than seven million houses were built by developers with mortgages from the government in the last decade. Thanks to Provive, Miriam’s life has since changed.

In the early 2000s, the Instituto del Fondo Nacional de la Vivienda para los Trabajadores (INFONAVIT), a Mexican state agency funded through payroll contributions that offers affordable housing finance to formal workers underwent a radical reorganization. The result was a complete transformation in the way housing was constructed and purchased throughout the country. The restructuring of INFONAVIT stimulated a dynamic through which private developers built thousands of houses that were bought by low and lower middle-income formal employees through credit subsidies and mortgages from INFONAVIT, replacing the traditional incremental construction process. INFONAVIT became the largest mortgage lender in Latin America.

More than seven million houses were built in the last decade; however approximately 600,000 have now been abandoned, vandalized or invaded according to Provive. This negatively impacted the market price of about two million houses. Most of these houses were built in areas where there was no community infrastructure, schools, transportation or employment. With a combined 180,000 houses, Tamaulipas, Chihuahua and Baja California have the highest number of abandoned homes.

These areas did not appear to present promising business opportunities.

Then, in 2008, after the housing bubble collapsed and the financial crisis hit its peak, Antonio Díaz—a mathematician with an MBA from Wharton and experience in the financial sector in New York, Mexico, Buenos Aires, and Hong Kong—led a team of investors to propose an innovative counter-cyclical business model. The abandoned, vandalized houses in Mexico would be bought, fixed up, and sold to low-income people in search of an affordable house and safe environment.

Since its creation in 2010, the groundbreaking business model of Provive has become a profitable, social impact enterprise that both renovates houses and revitalizes entire communities. Its largest shareholder is IGNIA, the Mexican impact investment fund.

Thanks to Provive’s business model, now Miriam and her family live in a save, welcoming neighborhood. Her vecinos are no longer delinquents: nearby houses were rehabilitated and sold, and her place and that of her neighbors has gone up 30 percent in value.

On the occasion of the launch of the IDB’s Opportunities for the Majority housing report, Many Paths to a Home: Emerging Business Models for Latin America and the Caribbean’s Base of the Pyramid, I interviewed Díaz on the business model and the idea of revitalizing communities as a business and social impact strategy.

OMJ: From where does the idea of revitalizing communities come?

Antonio Díaz: We started as a counter-cyclical model with the goal to buy abandoned and vandalized houses in Mexican cities, fix them and sell them at affordable prices to low-income people. It was the interaction with the neighbors and a survey of community perception that made us realize that the key instrument to secure the purchase of the houses was building communities around them. It’s not a matter of bricks and mortar. It’s a matter of people and communities. Like every family, low-income families in Mexico seek safe neighborhoods that are close to work and where kids can play freely in the streets.

That’s what motivates them to buy a house from Provive. Our minimal requirements to enter a fraccionamiento and start the program include access to jobs 15-20 minutes away by public transportation, basic infrastructure, such as hospitals, schools, and commerce, and no organized crime.

Among the fraccionamientos that represent a business opportunity for Provive, that is, houses that need to be re-occupied, we estimate there are over 600,000 houses in Mexico.

OMJ: What is the role of the government in the business model?

AD: The government’s programs are a key factor. Ninety-eight percent of our clients are INFONAVIT beneficiaries. Our clients pay Provive with their INFONAVIT credit. Most of the houses (rehabilitated) we sell range between $20,000 and $25,000. Interest rates for our low-income clients are as low as four percent and terms go from 15 to 20 years.

One of our single greatest accomplishments is that the government supports the restoration and revitalization model. It hasn’t been easy, but the government is now committed to containing the urban sprawl that has been expanding four or five times faster than the actual population. This was unsustainable.

OMJ: How have alliances and partnerships helped you strengthen the model?

AD: The alliance that began with Fundación Hogares two years ago was fundamental. They had an unused social revitalization methodology that we piloted and implemented successfully. We have now gained some independence thanks to the acquired know-how and experience of our team of social promoters. We also felt the need to adapt the methodology to meet the reality of the fraccionamientos and include what we call high impact investments, which are one-time projects we do as soon as we enter a community such as painting walls, cleaning streets, and planting trees, among other basic actions that improve the neighborhoods’ looks and energy and ignite community active participation.

We have established other alliances with the State government of Chihuahua and municipal governments of Tijuana and Mexicali, with active participation from municipal police and non-governmental organizations, among others.

OMJ: How profitable is the company? Have you thought about replicating the model in the region?

AD: Provive broke even the third year of operations. This has helped us leverage additional financing from Mexican commercial banks. We currently have a MXN$30 million credit line and are currently negotiating another one. By the end of 2014 we will have profits of approximately US$2 million. We’re aiming to have sales of US$50 million in 2015.

We have explored the possibility of replication. I attended the World Urban Forum in Medellin, Colombia, and realized the urban revitalization in the largest cities of the world is a global challenge. Countries like Peru or Chile face it every day. Brazil is applying a similar formula. The world agrees that the only way to revive cities is by involving communities. Provive’s experience is extremely useful for Latin America in particular.

We believe that if Provive is successful in Mexico, we could bring the model to other countries in the long-term. For now, we will focus on Mexico.

OMJ: What do you believe is the most interesting thing about Provive?

AD: The idea of added value or capital gain of the property. I’m convinced that this is an accurate indicator to measure if a person is happy living in a specific place. If the price of a house increases, it means more people want to buy. The value of the 6,400 houses in the fraccionamiento Cañadas del Florido, where we have completed our first intervention of urban and social revitalization has increased 30 percent in two years. This benefits the secondary market, having a huge positive impact on the lives of all the families inhabiting these new homes. Families are now aware that their houses are not only the physical space they inhabit, they are an important asset to them and their children. We estimate that the price of each one of the two million houses affected by vandalization and abandonment is MXN$100,000 (approximately US$7,700) below their fair selling price. Recovering these houses represents an increase in value of around US$15 billion, a positive economic result for families, neighborhoods and communities as a whole.