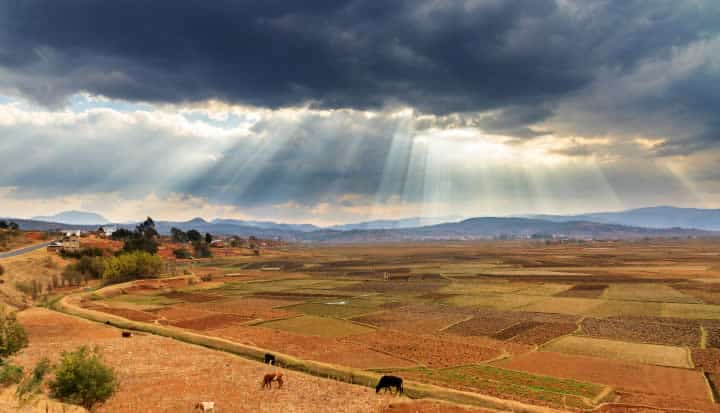 In developing countries, crop and livestock insurance in harsh climates is usually unavailable to small-scale farmers and herders. If insurance companies were to examine loss claims among many small, widely dispersed and remote farms and herding communities, it would make their transaction costs prohibitively high. As a result, farmers and pastoralists are left without insurance, vulnerable to the whims of the weather.

But innovations in science and technology are changing this story. Unlike traditional loss-based insurance, index insurance payouts are pegged to easily measured environmental conditions, or an “index,” that is closely related to agricultural production losses. Possible indices include rainfall, yields, or vegetation levels measured by satellites. When an index exceeds a certain threshold, farmers receive a fast, efficient payout, in some cases delivered via mobile phones.

A new report from the CGIAR Research Program on Climate Change, Agriculture and Food Security (CCAFS) demonstrates the viability of the public-private approach in creating index-based insurance programs with strong commercial potential that can reach large numbers of farmers. The report examines initiatives that have successfully scaled beyond the pilot level, reaching a total of over 30 million farmers worldwide.

Case studies explored in the report stretch from Africa to South Asia to the steppes of Mongolia, and demonstrate that farmers are better off over time as a result of index insurance. The report shows index insurance is not only an innovative science and development solution – it’s good business as well. Across the developing world, close collaboration with the private sector has brought to life index insurance schemes that largely began as development initiatives.

Now, many initiatives have transitioned to public-private partnerships that both lend farmers a hand, increase opportunities to market their produce, and show strong potential for commercial viability.

The Case of Mongolia

Livestock herding has played a vital role in the culture of Mongolia for thousands of years and contributes significantly to its economy. Harsh weather is also the norm, frequently devastating herds that sustain pastoral families and communities. Between 1999 and 2002, three consecutive unusually harsh winters led to the death of over 11 million animals, representing a loss of over USD500 million and increasing poverty rates by over 10%. The country’s small agricultural insurance industry, operating on a loss-based model, went bankrupt trying to pay out farmers and herders, and the private insurance system collapsed.

Enter index insurance. Working with the World Bank, the Mongolian Government designed an objective index based on livestock mortality rates that would pay out when rates reach a certain level. Since 2005, the country’s Index-Based Livestock Insurance Program (IBLIP) has protected herders from catastrophic losses to their livestock driven by extreme weather events. By 2013, over 45 million livestock were insured.

Mongolia’s scheme provides multiple layers of protection, capitalizing on different actors’ differing abilities to take on risk. Farmers are expected to sustain themselves through traditional systems of protection when the lowest levels of livestock mortality occur, or less than 6%. As the first line of defense, the private sector insures livestock mortality levels about 6%. The Mongolian government insures losses beyond 30% mortality—essentially catastrophic events that are very costly to insure against.

This layered system of risk financing gives free reign to comparative advantage—allowing both the government and the private sector to take on levels of risk commensurate with their ability to do so, and protecting private industry from the risk of bankruptcy. If the highest levels of risk had to be priced in the open market, the resulting package would be far too expensive for most herders. Index insurance products provide the unique opportunity to layer risk in this manner.

Initial assessments show that IBLIP is having a positive impact on reducing poverty of herders, with some regional variations. Access to and knowledge of the initiative have expanded steadily alongside policy purchases.

IBLIP’s success is reflected by a 2014 announcement that it will transition from a donor-funded project to a private company. In August 2014, the Agricultural Reinsurance Company of Mongolia was created, designed as a public-private venture fully compliant with Mongolian and international insurance and reinsurance regulations. IBLIP currently receives World Bank funding, which will be phased out through 2016.

Risk financing mechanisms such as index insurance work best as part of a package of risk management options for herders. IBLIP and similar ventures still have plenty of room to grow, particularly with regards to linking up with initiatives addressing other risks and inequalities that pastoralists face, such as poor market access, poorly developed supply chains, and lack of access to weather and climate information.

One response to “Unlocking Business Potential of Small-Scale Agriculture”