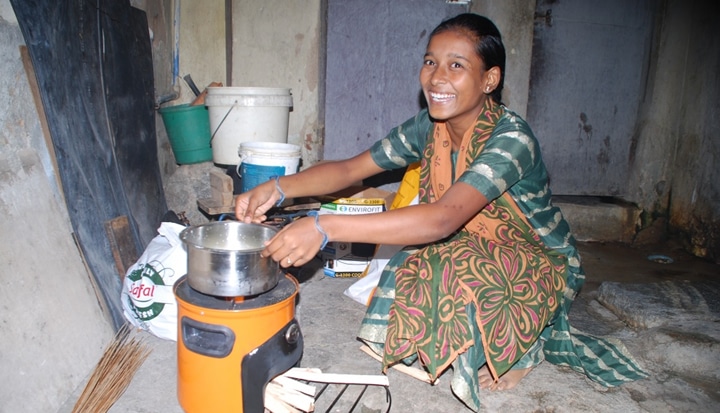 
Aviva and ClimateCare are applying a new methodology to their projects in India and Kenya, which measures the benefits of carbon offsetting for society as well as the environment. The LBG Framework, a peerreviewed international standard for measuring corporate community investment which started life as the London Benchmarking Group, has allowed the organisations to identify that Aviva’s involvement in the projects has improved the lives of over 200,000 people, as well as offsetting 126,555 tonnes of carbon emissions.

“All our projects measurably improve people’s lives”, says Edward Hanrahan, Director of ClimateCare, which has offset 15 million tonnes of CO2 since it was founded in 1997. “Many are centred around people and vulnerable communities – providing safe water, improving health, creating jobs and stimulating local economies. Our clients see the value of taking an integrated approach to sustainability and we are always keen to help them talk about the full impacts of their actions in a robust and recognisable way.”

In 2006, Aviva became the first insurer to go carbon neutral. It has maintained this approach through participation in ClimateCare’s carbon offsetting schemes, as well as the use of renewable energy sources and energy-efficient technologies to minimise its impacts in the first place. Dedication to managing and publicly reporting its environmental impact “adds value to Aviva”, says Zelda Bentham, Head of Environment and Climate Change at the company. She explains that customers and investors often ask how Aviva handle its environmental footprint, and believes that carbon offsetting is simply “something that responsible companies should do”.

Aviva has invested in two ClimateCare ‘Climate and Development’ schemes: Envirofit Efficient Stoves, in India, and the Kenya-based LifeStraw Carbon for Water project. The former project reduces dangerous smoke put out by inefficient cooking stoves, which kills over 400,000 people a year in India alone; safer stoves which cut toxic emissions by up to 80% and produce 60% less CO2 are now being installed in households. The LifeStraw project, on the other hand, helps combat waterborne diseases. Around 17 million people in Kenya don’t have access to safe drinking water, and many suffer from waterborne diseases such as diarrhoea – the third leading cause of death in Kenya. By distributing nearly 900,000 gravity-fed water filters, the project offers an alternative to boiling drinking water over a fire, saving money on fuel, reducing carbon emissions and protecting local forests.

Through annual surveys of the families and communities benefiting from these schemes, ClimateCare and Aviva can now see not only the exact carbon savings achieved through these programmes, but also their positive social effects. One example is described by Joel Kuyo, a clinician at the Bushiri Health Center, in the west Kenyan town of Kakamega. For many years, diarrhoea has been a major problem for his patients. “Unsafe water is the main cause, the way they collect it”, he explains. But since the distribution of LifeStraw water filters in the region, he has noticed that presentations of diarrhoea at the clinic have begun to decline.

Although the LBG Framework used to assess the Envirofit stoves and LifeStraw filters schemes has previously been applied to other social projects – such as Freshfields Bruckhaus Derringer’s ‘Ready for Work’ programme, which helps the homeless gain employment skills – this is the first time a carbon offsetting scheme has been assessed in this way. One benefit of using this existing framework is that the results from the offsetting programmes can be compared with those of other community projects.

“The very best offsetting projects have always had social benefits, but quantifying these has often been tricky”, says Iain Watt, Principle Sustainability Advisor at Forum for the Future. “The LBG Framework tackles this head on. And by providing big investors with the information they need to evaluate funding decisions, it will hopefully help channel new investment to projects that save lives as well as carbon.”

Following the successful assessment of Aviva’s offsetting efforts, ClimateCare is now applying similar evaluations to some of its other projects. Robert Stevens, who oversees client relationships at ClimateCare, says the organisation’s other clients are also showing interest in the LBG methodology. It seems identifying the social benefits of carbon offsetting, as well as the environmental ones, is clearly something many companies aspire to achieve.

This article first appeared in Green Futures Magazine, and is reproduced with permission.