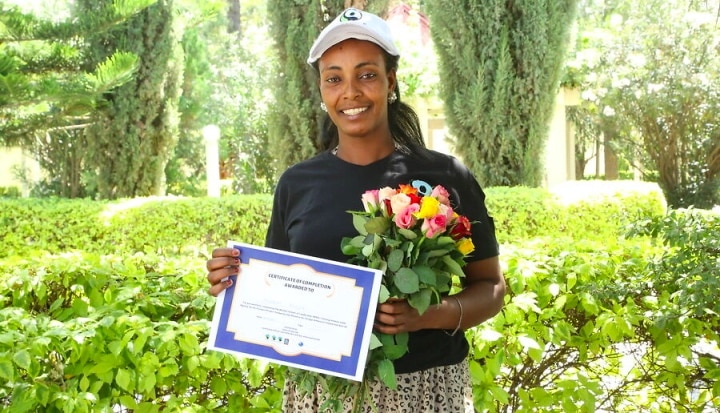 This International Women’s Day, Fairtrade Foundation spotlight how their relationship with Aldi UK went from sourcing to becoming longstanding programme partners, and how it has supported women, including Meseret Teshome who didn’t have the opportunity to progress with her education when she was young.


“Women have the potential of taking up leadership positions and roles, unlike in previous years when women were considered irrelevant and/or unable to lead and work equally as men”. This sentiment may seem like a given to most readers, but for the 25-year-old flower farm worker from Ethiopia who said these words it was a revelation.

This International Women’s Day, we spotlight how our relationship with Aldi UK went from sourcing to becoming longstanding programme partners, and how it has supported women, including Meseret Teshome who didn’t have the opportunity to progress with her education when she was young.

Meseret is one of 1,200 employees at Herburg Roses, (75% of which are women) where she grows the roses that end up in bouquets sold across Aldi UK’s supermarkets. Meseret and her fellow workers benefit from sales of Aldi’s Fairtrade roses whilst consumers benefit from transparency, with farms being audited to check Fairtrade standards are met. On top of this, the Fairtrade Premium supports pooled community investments, which can help workers cover children’s schooling costs and subsidize the inflated costs of food staples in the country. Building on this, the retailer was interested in exploring new ways of driving impact. For brands and companies that want to go further, our programmes are an increasingly attractive option.

“We want to make sustainability affordable to our customers. As part of this, we are committed to, amongst other things, respecting all human rights and to making every effort we can to improve the living and working conditions throughout our supply chains,” says Liz Fox, National Corporate Responsibility Director at Aldi UK.

Whilst women make up a large percentage of the agricultural workforce in rural communities around the world, they often receive the least remuneration and are among the most vulnerable to the climate crisis. The floriculture sector is an industry where workers receive low wages, while communities often suffer chronic food insecurity and poor quality of water and sanitation. Women can also be vulnerable to gender-based violence and sexual harassment, which have blighted the industry. During the pandemic, there was a rapid decline in flower sales and a subsequent fall in workers’ incomes. Women in particular bore the brunt of the crisis, but at Fairtrade we believe as we all work towards addressing these challenges, they are the key drivers of change.

Aldi says that as a signatory to the UN Women’s Empowerment Principles its partnership with Fairtrade helped the retailer work towards its aims to improve the lives of workers and their families within its supply chain: “We have found Fairtrade to be an ideal partner, not only because of the vast experience working on the ground, but also because of the emphasis Fairtrade places on giving farmers and workers influence and control through representation committees.”

Following the success of Fairtrade Africa’s Women’s School of Leadership programme (WSOL), the Dignity for All initiative was launched three years ago. The project was financed by Aldi UK, the Finnish Ministry of Foreign Affairs and the Swedish Postcode Lottery. While the project is now ending, it has delivered results that will be long-lasting, for women like Meseret who gained self-esteem as well as practical skills and knowledge that puts better career opportunities within her reach.

Meseret is now working as senior supervisor and started a business with other women from the course. They support and mentor each other, while selling spices and herbs grown with seed capital from Fairtrade. After graduating from the programme, she said: “I believe I got this promotion because I’m empowered after the life skills training received from The Women’s School of Leadership. It helped me build my self-confidence, to get knowledge on gender equality and empowerment. I have learned to be independent and developed the thinking that, women can do anything.”

More than half of the 73,000 workers on Fairtrade certified flower farms are women, so ensuring women have a say at work and in the development of their communities, as well as having opportunities to learn, progress in their careers and become entrepreneurs, is smart business. For example, Tejitu Ambawu, 30, says a business she started previously had failed. However with newly gained business management and saving skills she is now successfully making a profit from breeding sheep when she’s not working also as a supervisor at Herburg Roses. Aldi UK’s Liz Fox agrees and sees the inclusion of women on flower farm worker committees as particularly important: “With greater gender equality in representation, we hope they are better able to influence decision-making structures, to improve labour conditions and relations at the workplace.”

The project is even helping flower workers outside of Aldi’s supply chain, as six farms have benefitted from two of the WSOL programmes. One mother, Adanech Duga, has benefitted from an improved maternity policy. She said: “After our trade union managed to negotiate for four months of maternity leave...I had enough time with my son. I had time to nurture him as a mother…he was physically strong when I left him for work…it’s a privilege.”

Aldi has inspired its customers by telling the stories of those who have participated in the Women’s School of Leadership on Fairtrade flowers packaging, on shelf and in the retailer’s leaflets, as well as on social media and the webpage. Graduates from the Women’s School of Leadership were also featured in a Fairtrade display at London’s iconic Chelsea Flower Show in 2021, where visitors were able to learn more about the programme and the partnership with Aldi.

Businesses work with Fairtrade in a multitude of ways. Over recent years we’ve seen corporates shift their focus in response to growing demand from conscious consumers. ‘Sustainability’ is 2022’s International Women’s Day theme and we urge any businesses thinking about what more they can do, to explore working with Fairtrade. We’ve proven that businesses can play a vital and active role through working in partnerships that put producers at their centre.