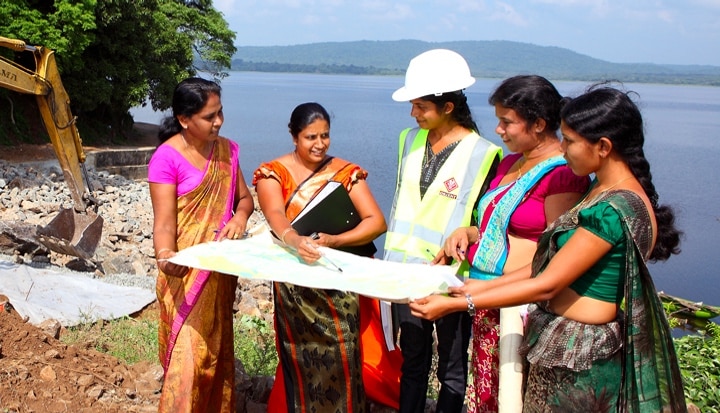 Do you think the world is becoming more equal for women at work? The recently published Women, Business and the Law 2019: A Decade of Reform gives us some insight. While achieving gender equality requires a broad range of efforts over time, the study focuses on the law as an important first step to providing an objective measure of how specific regulations affect women’s incentives to participate in economic activity.


Do you think the world is becoming more equal for women at work? The recently published Women, Business and the Law 2019: A Decade of Reform gives us some insight. While achieving gender equality requires a broad range of efforts over time, the study focuses on the law as an important first step to providing an objective measure of how specific regulations affect women’s incentives to participate in economic activity.

What is captured in the Women, Business and the Law index?

The study introduces a new index structured around eight indicators that cover different stages of a woman’s working life, which have significant implications for the economic standing of women: Going Places, Starting a Job, Getting Paid, Getting Married, Having Children, Running a Business, Managing Assets and Getting a Pension.

For instance, if a woman cannot leave her home without permission can she effectively look for a job or go on an interview? Even if she is hired, will she need to quit if she gets married or has children? Will she have to move to a lower paying job because she must balance work with caring for her family?

And what if the law does not allow her to manage her own assets, affecting her ability to start a business? At the end of her career, will she have to retire earlier than a man, giving her a longer retirement but a smaller pension to live on because she worked for fewer years with lower pay?

As you can see, these indicators are closely associated with outcomes that relate to women’s economic empowerment, in particular women’s labor force participation. The study found that in economies that conducted reforms, more women work and are paid better.

The global picture: What does the index tell us?

The index shows that most of the world moved towards gender equality over the past decade. Ten years ago, the global average score was 70.06. Since then 131 economies made 274 legal changes towards gender equality. This led to a 4.65 point increase in the average global score, to 74.71 today. This is a significant achievement—but it also means that women still have only three-fourths of the legal rights of men in the measured areas. 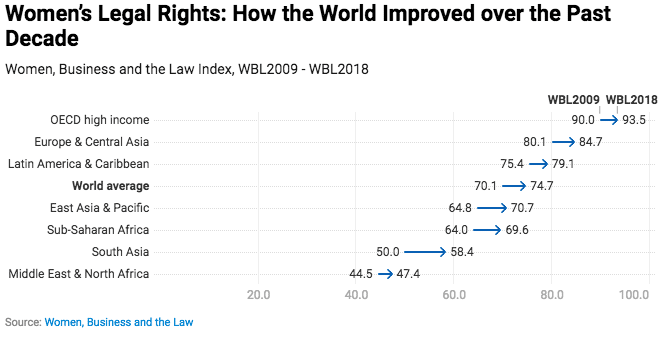 Regional Trends: Who Improved and How?

All regions of the world improved on average towards gender equality over the past decade, and six countries—Belgium, Denmark, France, Latvia, Luxembourg and Sweden—now have a perfect score of 100, meaning that the law treats men and women equally along all the dimensions measured. No economy was gender equal under the law a decade ago.

But this improvement was not equal across regions. The average improvement was the highest in the South Asia region, followed by the East Asia and the Pacific and the Sub-Saharan Africa region. The Middle East and North Africa region had the smallest movement towards gender equality, over the past 10 years. This region is also the part of the world were laws are most unequal between men and women. Consequently, the gap between the Middle East and North Africa region and the rest of the world became bigger, despite some absolute improvement.

Each region also had a different pattern of reforms. In Sub-Saharan Africa, the most reforms were in Starting a Job and Getting Married. Within each of these indicators the biggest areas of reform were on laws around gender-based violence. Five economies, for example, introduced laws on both workplace sexual harassment and domestic violence.

Economies in Europe and Central Asia reformed the most in Getting a Pension. Of the 11 economies in the region that reformed in this indicator, nine are currently equalizing the ages at which men and women can retire with full pension benefits.

In the Middle East and North Africa, the biggest area of reform was Getting Married, where four economies reformed by introducing domestic violence laws.

Where are the gaps? Opportunities for reform to achieve legal gender equality

As you can see, while progress has been made, women in many parts of the world still face discriminatory laws and regulations at every point in their working life. The graph above highlights areas where legal reforms are needed today—particularly around Having Children, Getting Paid, and Getting a Pension. Over the past decade, 56 countries—spanning all income levels and regions—enacted no reforms at all to improve women’s equality of opportunity.

We hope that this new index will inform decision making regarding policy reform and private investment, as well as support research on institutions and regulations, so that women will be able to make good economic choices for themselves and their families.

Have you been confronted with legal barriers that are constraining you from making good economic choices? Tell us about your experience, and how over the next ten years, even bigger steps can be taken towards legal gender equality.

This blog was first publishes on The World Bank's The Data Blog  and is reproduced with permission.