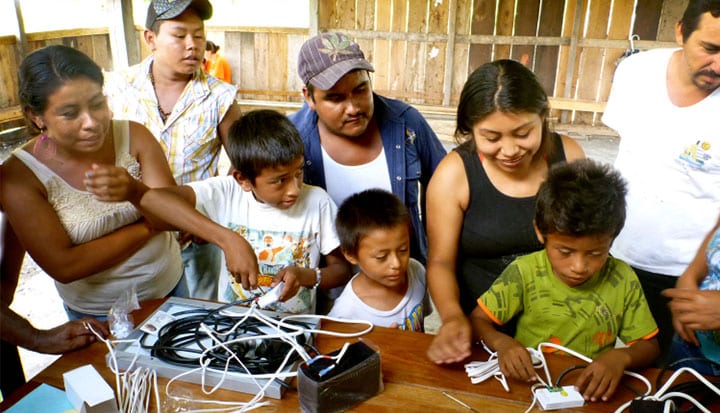 Mexico’s solar energy market is booming. And that means more and more people, even those living on less than $7 per day, can afford clean electricity.

The second-most populated country in the Americas is home to the fastest-growing regional solar market in the world. About 97 percent of Mexico’s population already has access to electricity, so higher-income consumers have been obvious targets for renewable energy producers like the multinational Martifer, which has partnered with Mexico’s state-owned electric utility, Comisión Federal de Electricidad (CFE). Social enterprises are also getting into the mix. And they’re generating buzz among people who have always lived off the national grid, as many as five hours from the nearest town.

“We work in rural Mexico, the south and southeast. The great majority of our customers lack adequate housing, living in one- or two-room homes with dirt floors and thatch or tin roofs,” Iluméxico co-founder and CEO Manuel Wiechers said. “They earn about $200 per month, but almost 15 percent of their income is spent on inefficient and hazardous lighting services.”

With Iluméxico, rural agricultural communities invest in clean solar power. A farmer puts the cash that would otherwise be used to buy candles, kerosene and diesel—in a town center two hours away—toward a solar system customized to his or her needs. A $50 down payment and anywhere between three and 18 months turns off-grid farming families into independent energy producers.

“It’s important for technology costs to go down, but the key to success is on the financing and distribution side,” Wiechers said. “People can pay for our solar kits because the baseline is what they spend on other sources of light and power. Banamex supports us with financial awareness programs, as do others.”

Fifteen- and 25-watt systems account for 80 percent of Iluméxico’s sales. These systems can power two or three LED lights and a USB phone charger or small radio. Larger systems can include inverters to connect appliances and capacity to power refrigerators, water pumps and electric fences for livestock. One family will use the tech to enjoy dinner after dark, while another will pursue income-generating activities. Reactions vary, but Wiechers said he’s seen people shed tears of joy.

“Our designs and interventions are based on direct customer feedback and requests. We’re in places that no one has gone to before, so there is a lot of anticipation and gratitude for our work,” Wiechers said. “Even during a first installation, some people say, ‘What about my TV?’ or ‘When can I connect a radio?’”

Iluméxico has set up six branches which serve 4,300 families, or 23,000 people. And lighting solutions have also been installed in both schoolhouses and health clinics to power lights, fans and edtech resources, and better preserve medicines.

Iluméxico installed more than 900 solar systems in the state of Oaxaca over the past year and a half, aided by a partial government subsidy which covered 40 percent of the equipment cost. They’re racing to install another 2,500 in competition with another firm.

“The Energy Ministry and CFE have realized that reaching the last three percent of Mexican consumers through conventional methods is hard,” Wiechers said. “We’re experts in that department. We’re hoping to change the way government visualizes its role in unlocking energy access—as facilitator and a funder rather than executor—because there are private companies doing it in a sustainable way.”

Iluméxico’s services are in demand in cities, too. Wiechers and his team run a program called Ahorra y Ayuda, which translates to “Save and Support.” Money saved by residential solar producers or businesses in urban areas is used to finance solar systems for rural families.

It’s all in an effort to help Mexico, a country with high levels of solar radiation, deliver on its renewable energy potential. The country’s solar capacity could grow to 295 megawatts this year, the level of U.S. capacity in 2008, but it could also end up being as little as 100 megawatts.

Government energy credits are still being granted to high-efficiency fossil fuel projects, which does a disservice to small-scale solar producers, and Mexico’s targets for renewable energy are anything but ambitious. Mexico has a long-term target of producing 35 percent of its energy from clean sources by 2024, but earlier this year cited cost as the reason it cut the 2018 target of 8.2 percent to 5 percent.

“Mexico is still in a period of regulatory transition, but it’s still positioned to be one of the best national markets in Latin America overall," GTM Research solar analyst Adam James said.

Wiechers is optimistic he’ll not only prove the value of Iluméxico’s work but also earn the right to replicate his solution with other state governments, in the north of Mexico, the hub of solar development in the country, and across Latin America. There are more than a billion people around the world who still lack access to electricity, but Wiechers hopes to make renewable energy a realistic and available option for everyone.

“We want to expand to places where there is a real need for our solution,” Wiechers said. “If we can team up with new players, we can reach 50,000 people in the next five years, and be another step closer to achieving the 2030 universal access goal.”

This story is part of a series, which spotlights leading young innovators to support the Unilever Sustainable Living Young Entrepreneurs Awards, launched by Unilever in partnership with Cambridge Institute for Sustainability Leadership and in collaboration with Ashoka.

This article first appeared on Virgin.com and is reproduced with permission.

To find out more about the Awards and the Global goals for Sustainable Development, head to changemakers.com. To follow the conversation on Twitter, search #GlobalGoals for a #BrightFuture.