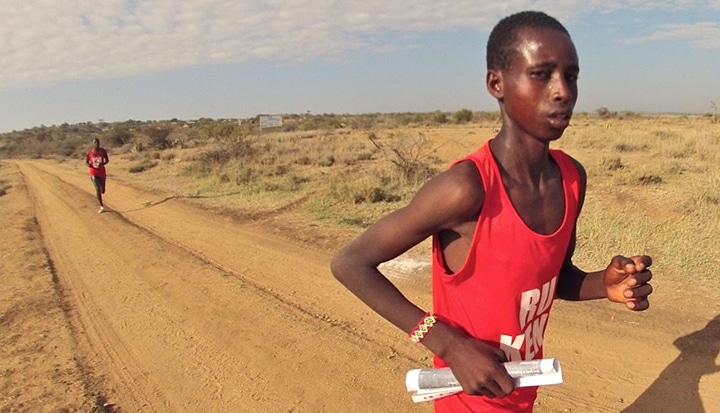 
Kenya has produced some of the greatest distance runners in the world. Since 2011, Kourage Athletics has harnessed this storied tradition by creating running apparel for athletes worldwide. Kourage is now turning to the crowdfunding site KickStarter to sell its next shirt.

The campaign, which can be found here, features a red athletic vest (tank-top) with the words RUN KENYA printed across the chest.

The RUN KENYA shirt made its public debut at Kenya’s only UltraMarathon a 75km (46-mile) race, where temperatures reached 40-degrees Celsius (104-fahrenheit).

The Kourage shirts were worn by over 200 Kenyan runners including

Testing garments under such extreme conditions is no accident. Hussein Kurji, Kourage Co- founder, remarks, “Before releasing a shirt to the public, Kourage prototypes must be approved by the fastest runners in the world.”

Kurji, 35, a Kenyan citizen and Nairobi designer continues, “We have a motto at Kourage, ‘Fast enough for a Kenyan, fast enough for you.”

In its brief history, Kourage has sold two-collections of apparel to over 40-states and 20- countries. But Kourage is a fledgling startup.

Wakiihuri, who also won the New York and London marathon continues “I’m personally calling on runners everywhere, to unite in common purpose, and make Kenya the running apparel capital of the World.”

Chris Markl, 33, and the only American involved in Kourage adds, “Kourage is not Nike. Its us, a tiny startup, against a massive multi-billion dollar corporation.”

Markl, an international economist continues “Each Kourage shirt is powerful, transforming a runner into a modern day hero. 10-years from now, no one will remember another boring Nike garment. By purchasing a Kourage shirt, one is able to state ‘I changed the world, I created Kenya’s running brand’.”