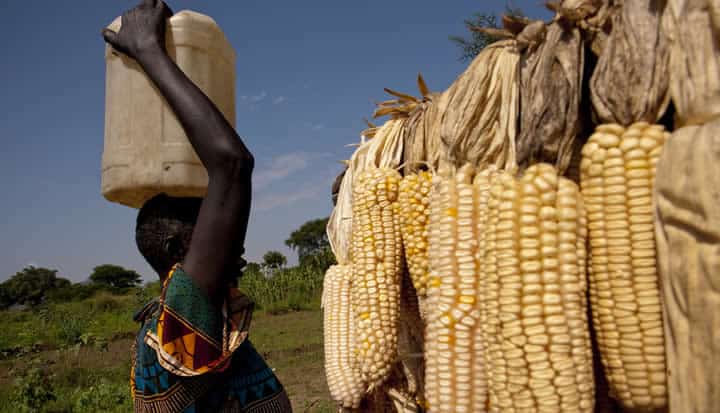 
‘South Sudan: Wide open for Business’ read a recent headline on the Africa Business magazine. Juba and indeed South Sudan is bustling with activity. Driving through the capital city and to areas as far as Rock City, one can feel the developing vibrant business environment. The overwhelming response at the Africa Enterprise Challenge Fund launch in South Sudan is testimony to this. The AECF South Sudan Competition, officially launched at the Juba Regency hotel on 27thOctober, saw a room filled to capacity with keen investors.

The competition funded by the UK Government’s aid programme (UKAid) through its department for International Development (DFID) seeks to promote risk taking and support innovative business ideas in agribusiness that combine commercial viability with development impact in South Sudan. AECF has previously awarded funding to SABMiller/South Sudan Breweries Limited (SSBL) to improve the livelihoods of small farmers in Southern Sudan by assisting the local brewery develop a local supply chain for Cassava for a new cassava beer.

The guest of honor at the launch event, the Minister of Agriculture and Forestry, Betty Acan Ogwaro, lauded the AECF for creating an opportunity for South Sudan to develop its agricultural sector. The Minister described the AECF as an innovative way of partnering with the private sector to create markets for the poor and stimulate growth.

South Sudan currently imports most of its needs from neighboring countries despite having large tracts of farming land with good natural resources for grains and cash crops. There is also immense potential along the agribusiness value chain in sectors such as processing, storage, and transportation of agricultural goods. The honorable minister also acknowledged the contribution of agriculture to improving food security whilst creating employment.

Mark Mallalieu, Head of DFID South Sudan, reiterated the honorable minister’s statement that investing in agribusiness will create jobs along the value chain. He went on to add that “Expanding South Sudan’s economy through investment in agriculture will be a good strategy for moving away from a single dependency on oil.”

He was not alone in his call for investments in South Sudan. Other participants included:

Several interesting questions arose from the audience after the presentation. FARM Africa’s Godfrey Ouna, based in Juba, will be at hand to help with the applications. The event also received a lot of attention from the local media. We are already receiving applications. Judging from the overwhelming response at the launch we expect much more before the close of the competition on 15th December 2011.

Editor's Note:
The AECF is launching three new competitions to encourage business innovation and investment in:

African Enterprise Challenge Fund and Business Action for Africa are hosting an event to promote these competitions in London on 10th November between 8.00am – 9.30am. If you are a business and interested in learning more about opportunities to partner with AECF, click here to find out more and to apply for a place.