Training and Support for Women Refugees 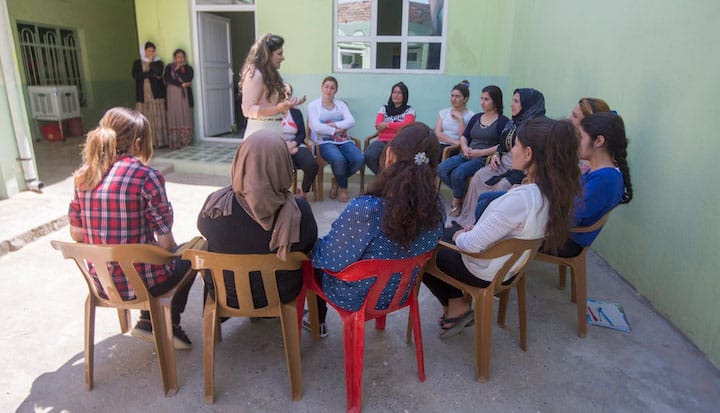 Training and Support for Women Refugees


Mandana Hendessi will be speaking at a dinner hosted by Women Advancing Microfinance UK on Tuesday 2nd May 2017 in London.

She will be talking about the work that Women for Women International (WfWi) and its partners are doing in and around refugee camps in the Kurdistan region of Northern Iraq where they are providing life and business skills training to women refugees, as well as psycho-social support and crucially, a safe space for women to gather, share experiences and support each other. Tickets to the event are available here.

Ahead of the event, we asked Mandana to tell us a little of the work that is going on and why it has been important for Women for Women International to engage in this issue.

What impact is the project having on women refugees in areas like Northern Iraq?

We have reached out to 600 Syrian refugee women living both inside and outside camps in the Kurdistan Region of Iraq since November 2014. We have provided psycho-social support, livelihood training, women’s rights and gender-based violence awareness and prevention and access to justice. We have also provided training in business and leadership skills for the women. As a result of our training and support, we have seen the women improve their self-confidence, which enables them to be more involved in decision-making in the household as well as in the community. It empowers them to build and develop support networks in the community, connect to essential services, as well as become more confident in reporting harassment, abuse and violence to authorities. Importantly they are improving their income generation.

Why has WfWi chosen to work in this specific area?

When the war in Syria intensified in 2012, we were concerned about Syrian women and tried to find ways of supporting them but found it impossible to work in Syria itself as the security there deteriorated very rapidly. So we decided to support Syrian refugee women in neighbouring countries. The Kurdistan Region of Iraq was chosen because of the large influx of Syrian refugees there and the relative security it provided to work with the women through local partners.

What is it like for women living in the camps and surrounding areas?

Whilst living in a camp can provide some security and protection for women, it takes away their individuality, reducing them to a number. However, women who live outside camps are often more vulnerable to harassment and abuse by local men. They are often caring for their families on their own. Furthermore, they are more likely to be poorer, having to make ends meet on very low income.

The biggest threat to Syrian women in Kurdistan Region of Iraq is gender-based violence, which impedes their chances of finding gainful employment. Many of our beneficiaries have recounted experiences to us of when they have searched for jobs and were told by prospective employers that they would get a job if they had sex with them. Other women say they do not set foot outside the home because they fear abuse and harassment by local men ranging from taxi drivers to doctors.

What would happen to some of these women and their families if they didn't receive support?

I can think of a few obvious possibilities: chronic physical and mental ill-health, heightened risk of violence, poor hygiene and nutrition, losing hope and inspiration – to sum up, the slow and painful death of a generation.

What are the prospects for people living in the camps?

Living in a camp should just be an emergency measure. It’s cruel and inhumane to expect people to live in a camp for years with no prospect of integration into the wider host country. We cannot subject people to such a restricted and soul-less existence for so long! The host countries have to find creative measures of integrating refugee and displaced families into the community. This is essential – refugee and displaced women have so much to offer not just to their own communities, but also to the host community, enriching the local culture.

Of course one would hope that the conflict in Syria and Iraq ends soon, that infrastructure is reconstructed, peace and reconciliation achieved so that Syrian refugees and displaced Iraqi women and their families are able to return home - but some may bond with their places of exile and with people who have embraced them; they settle into new jobs and new ways of living. They need to be allowed to exercise choices about where they want to settle – where they feel secure and comfortable.

Is the situation getting worse in these areas/camps?

The current situation is desperate – I can’t think of a situation that could be worse than this! For the long-term, we need to work for peace and justice for all in the region; meanwhile, we need to run programmes for refugees and displaced women that aim to nurture their resilience and talents, helping them to rebuild their lives wherever they are and live more fulfilled lives with their families.