The Private Sector and Ebola, Working Towards Recovery 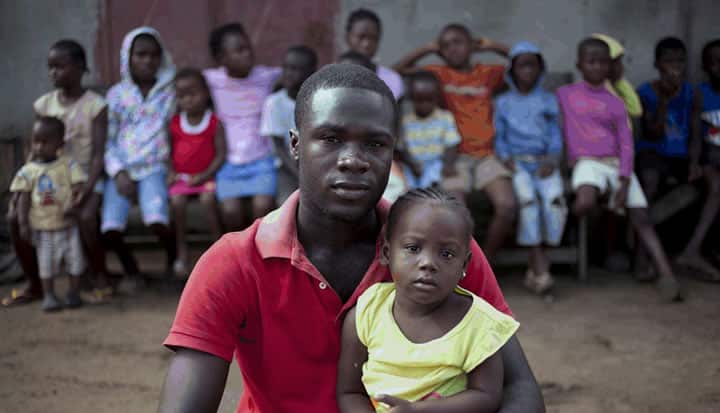 The Private Sector and Ebola, Working Towards Recovery

Click here for more stories about
SDGS
Thursday May 21 2015

Stephen Seckor with one of his nieces, Monrovia, Liberia. Credit: Abbie TraylerSmith/Oxfam

“Now I take care of 13 children. I lost four persons – my mother, my father, my two sisters. I was also very sick. Since I came back from the Ebola Treatment Unit I lost my job. I have nothing to do. I am just doing a little construction. It is not easy to take care of thirteen people.

It is difficult. We hope to put them back into school, make a living, live a bit better, with good shelter and things. We hope the future will be better.”

Stephen’s story is one of many from West Africa as Liberia begins to recover from the near crippling crisis. It has been a difficult journey and has taken the combined efforts of the international community and the people of West Africa to reach this point.

However, private sector involvement is not always clear cut and because businesses exist to turn a profit, their interventions are often viewed with some distrust as to their true purpose. This is particularly so for companies with a specific business interest or stake in the crisis, for example pharmaceutical and medical supply companies during the Ebola crisis. Here there is a potential conflict of interest, in order to ensure that there is neutrality and impartiality and that humanitarian relief is provided based solely on needs requires scrupulous accountability and transparency.

This includes the need for the Private Sector to provide

It important to remember that while gifts in kind like vehicles for transportation are crucial to saving lives during a humanitarian crisis financial contributions are often the fastest way to mobilise resources effectively. There have been times when donations in kind in have been inappropriate and actually slowed down the response.

Putting the spotlight on West Africa, and highlighting Stephen’s story and others like him it is clear that even though Liberia has been declared Ebola free, the human and socio economic crisis is far from over. Before Ebola struck West Africa, Liberia and Sierra Leone were among the poorest countries in the world – now they are even poorer. The challenge of recovery is enormous but communities must be at the heart of it.

One of the biggest contributions from the private sector during a humanitarian crisis is to continue normal business operations within reason. Closed stores, banks, mines, factories lead to loss of income and limits people’ access to goods, money or services necessary for their wellbeing. The different parts of the private sector will play different roles. Those with footprint in the affected countries local and international regardless of size are often the first responders and with a major responsibility to keep operations running.

For companies with operations or supply chains in West Africa, returning their operations to full capacity will go a long way in helping those economies recover and put them back on the road to development. A number of people interviewed by Oxfam noted how it appears the economy is standing still. Mary Sesay, a public health volunteer in the John Thorpe community, western Sierra Leone said “Before Ebola people had so many things – a market, petty trading – but now everything is limited. I have three children. After Ebola, my main purpose is for them to go back to school. But because of Ebola, Sierra Leone is at the bottom of development”

A large portion of the economic damage to West Africa – indeed the wider economic impact – could be from aversion behaviour, rather than from the direct impacts of the crisis measured by ‘cost of illness’ estimates. This was clearly the case during the 2003 SARS epidemic in southern China and Hong Kong, where aversion behaviour accounted for more than 80 per cent of lost economic activity. The Ebola crisis resulted in notable instances of aversion behaviour; in some cases the response was disproportionate to the level of risk. Neighbouring countries Gambia and Senegal saw tourism activities substantially curtailed, and Kenya’s growth estimates were revised downwards as a result of Ebola-related tourism cancellations.

On the good side, the latest report from the World Bank shows that in Liberia employment continues to improve, a heartening note considering that nearly half of those working when the outbreak was first detected in March 2014 no longer had jobs by early November 2014. However, women continue to experience the worst job losses – they are typically self-employed, working as traders or in markets, the type of jobs that have been most impacted. Special effort needs to be made to ensure that female headed households are not left behind during economic recovery. The private sector also plays key role in good business practices outside emergencies – decent wages and paying tax. Oxfam’s report showed that wealth of the richest 1 per cent will overtake that of the other 99 per cent of people next year unless the current trend of rising inequality is checked. Right now, big companies can dodge billions in taxes. Meanwhile, the world's poorest countries lose out on funds that could pay for vital services like education and healthcare - crucial in tackling extreme poverty.

Oxfam has listened to women and men in Liberia and Sierra Leone to hear their priorities for the immediate response, the recovery and beyond. Underpinning all of the priorities, was the need to continue listening to communities as the struggle against Ebola continues and recovery plans are formed and implemented. While acknowledging all the different actors; government and private sector included. Oxfam believes that it is for the people of Liberia and Sierra Leone to say what their priorities are for both the immediate response and long term recovery. However, it is for all of us to demand that helping all affected countries remain a global priority and that we stand by them through recovery once the Ebola headlines are over.