The Inspiring Possibility of Baobab 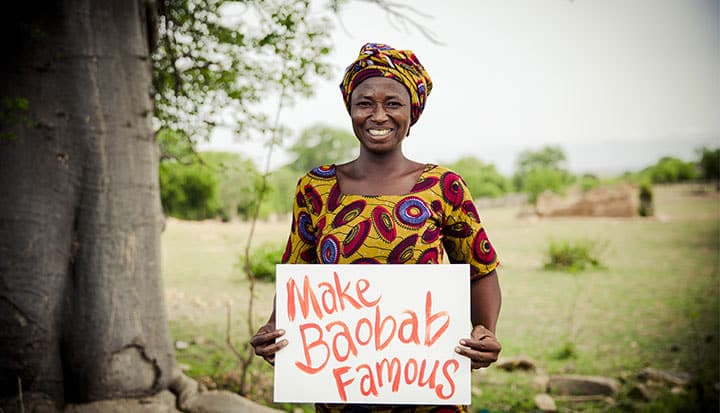 The Inspiring Possibility of Baobab

Twelve years ago I was working in the advertising industry, creating and launching brands for big multinational companies; investing all my energy promoting products l didn’t particularly believe in (like nasal decongestants and frozen ready meals) for people who were largely unappreciative. And I was thinking – what am I doing with my life?

At the age of 25 I reached a dead end, had a nervous breakdown and somehow found myself clinically depressed. In my desperation I tried everything I could to get out of it, ranging from anti-depressants to visiting a faith healer in Brighton – but nothing made a blind bit of difference.

And then – completely out of the blue - I got a random phone call from Angus Davison - a family friend and farmer in UK and South Africa, offering me the opportunity to volunteer my marketing skills to a ‘pro-poor’ horticultural enterprise in The Gambia. I was not interested, of course. What could prospect could possibly be worse than going to some god-forsaken outpost in Africa and working with fruit and vegetable farmers? No, if I was going to be suicidal, I would much rather suffer from the comfort of my own home.

Fortunately for me my friends and family had other plans - and I ended up on the plane. The extraordinary thing is that after six full months of hopelessness and despair, it took just three weeks in the warm embrace of The Gambia – ‘The Smiling Coast of Africa’ - to bring me back to life. And instead of staying for the intended six weeks I ended up staying for almost four years. In 2008, the year I came home to London, our project won three international awards including a UN World Business & Development Award. I had become completely inspired by Africa and by the power of combining entrepreneurship with development impact in rural Africa.

During my time in The Gambia, I witnessed first-hand the abject failure of the aid model for agricultural development in Africa, whereby huge amounts of donor funds are “invested” in time-bound “development projects” and thousands of women are trained – and paid per diems - to grow X, Y or Z cash crop, which some highly-paid consultant has identified as being ‘hot property’. Sadly little or no thought has been given to how these crops will actually be marketed. The project expires and the women have little choice but to uproot, go back to their traditional subsistence activities and wait for the next aid project to come along. And hence the downward spiral of aid dependency continues.

What is most extraordinary, however, is that at the very same time as all these effectively useless cash crops are being produced, Africa’s rural landscape has an abundance of existing indigenous crops – with huge potential in the burgeoning global health and beauty industry. In fact, more than 25% of the world’s botanical species originate from Africa, but less than 1% of what we see on the shelf. This statistic tells its own story. The very most extraordinary example of this what I have come to call ‘The Inspiring Possibility of Baobab’.

Known as The Tree of Life, the baobab is an icon of the African savannah; a symbol of life and positivity in a landscape where little else thrives. While many people recognise this extraordinary tree from The Lion King, most people don’t realise it has bears a fruit with the potential to transform millions of lives.

Baobab has six times the vitamin C of an orange, twice the calcium of milk, six times the potassium of bananas, almost fifty percent fibre and one of the highest antioxidant capacities of any fruit in the world. However it is not a staple. It also happens to be the only fruit in the world that dries naturally on the branch, meaning it does not require refrigeration, and just needs to be harvested and sieved to produce a ready-to-use ‘superfood’. It gets better.

There is no such thing as a baobab plantation; every tree is community-owned and wild-harvested. Growing in the driest, remotest regions of 32 African countries, up to 10 milliion rural households can supply baobab fruit from a crop that is so abundant it goes majority to waste. National Geographic estimated that if there were a global demand for baobab this existing crop could be worth a billion dollars to rural Africa.

The only problem is that 95% of people have never heard of it. All we need to do is MAKE BAOBAB FAMOUS.

The company I co-founded, Aduna is an Africa-inspired health & beauty brand and social business. Our mission is to create demand for under-utilised natural products from small producers in Africa – starting with baobab. We have taken baobab from almost complete obscurity to London’s hippest and best-selling superfood and, for our work at the supply chain in Ghana, were recently shortlisted for three Guardian Sustainable Business Awards. And now I am asking for your help to realise our vision.

Aduna is right now contesting Virgin's Pitch to Rich contest and have come from a field of 2500 entrants into the Final 10. If we finish in the Top Three (purely on public votes), we will get the opportunity to pitch directly to Richard Branson for a £250k Make Baobab Famous campaign. The marketing prize is not the important thing about this (we already have very good social investors), it is the exposure of being in the Grand Final and getting the backing of Sir Richard Branson and the other judges, which include Jo Malone, David Gandy and the CEO of Mumsnet. This truly would Make Baobab Famous – and as I have just explained will help transform the lives of potentially millions of women in rural Africa.

Please help us by taking literally ten seconds to vote to #MakeBaobabFamous.

To register your vote click here. Virgin will then send you a link in a mail to verify your vote. If you don’t receive one of these, please check your spam.

By way of thanks for your contribution, anyone who forwards this email to [email protected] will be entered into the competition to win a year’s free baobab.

Finally, if anyone has access to any large networks of people who would want to support this mission, then please do get in touch as soon as possible.

Thank you all so much for participating and welcome to The Aduna Feel Good Tribe.

2 responses to “The Inspiring Possibility of Baobab”