The Future is Bright for Malawi's Green Economy 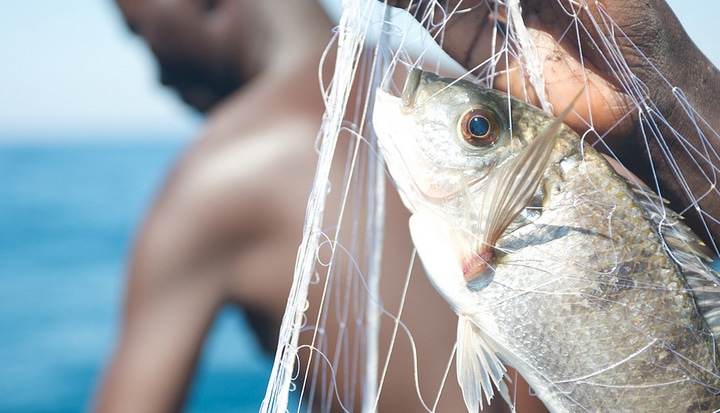 “I can see that the future is bright,” says Kate Kaunda, a fish processor from Kachulu Beach in Malawi, “I can see the benefits of using modern technology in drying the fish and processing the fish. We get the profit on all the fish species. I help my family in paying school fees to secondary school children and I also support poor people.”

Fish is an important renewable resource. Beyond its role in marine and freshwater ecosystems, fish significantly contributes to the survival and health of the world’s population. This is certainly the case in the Lake Chilwa Basin in Malawi, where fish from the lake provides livelihoods for more than 1.6 million people.

Fish contain proteins, vitamins, micronutrients and essential fatty acids that improve human development. Its nutritional value is especially high for small fish, which are eaten whole. Fish is particularly important in low-income food-deficient countries like Malawi, where it provides over 60% of animal protein for the population. However, fish is continually becoming a scarce commodity for most Malawians and the per capita consumption is declining. Currently, Malawians consume less than 4kg per person per year, although the production of small species such as Matemba (Barbus paludinosus) has been increasing. 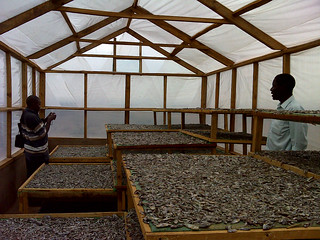 “Green Economy” involves the transformation to more environmentally friendly production methods and consumption patterns. We need an economy that creates employment and increases incomes of the poor without negative effects on the environment. UNEP’s 2011 Green Economy Report "Towards a green economy" emphasizes the need to generate new jobs as a strategy for the elimination of poverty. The report defines a green economy as one that results in “improved human well-being and social equity, while significantly reducing environmental risks and ecological scarcities”.
Considering the role that fisheries play in the Malawian economy, greening the sector is a key priority. When managed intelligently, fisheries will sustain a greater number of communities and enterprises, generating employment and raising household income, particularly for those engaged in artisanal fishing. It will at the same time help restore damaged freshwater ecosystems.
Stephen Hall, Director General of WorldFish, says that although many people would argue that Africa has not yet seen the green revolution, now is the time to make sure that it does not miss the ‘blue revolution’ taking place in many countries. The blue revolution is the water equivalent of the green revolution and primarily refers to the management of water resources that can steer humanity through a boom in aquatic resources, portable water and crop irrigation.

The Lake Chilwa Basin Climate Change Adaptation Program with funding from Norway is working with the communities in the Lake Chilwa Basin to address climate change by building social, economic and ecological resilience. The Lake Chilwa Basin is one of the most densely populated areas in Malawi with 321 people living per square kilometer, as prescribed by the 2008 population census. Lake Chilwa is home to 27 species of fish, including Matemba, one of the most commercially important species. The average annual catch from this lake alone comprises about 20% of the national fish production in Malawi.
In order to produce more energy efficient technologies, The Lake Chilwa Basin Climate Change Adaptation Program (LCBCCAP) introduced solar fish driers and energy efficient fish smoking kilns to help reduce fish post-harvest losses, and ease climate change related effects. 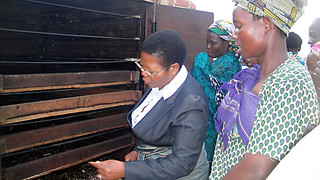 Previously, fish caught from the lake was mostly dried in open air, the oldest traditional method used to preserve fish. The quality of the fish from this process is compromised through contamination by dust and insects that pose a health threat to consumers. In addition, during the rainy season, processors incurred a nutritional and physical post-harvest loss of at least 30 – 40%, rendering the product less profitable. If fish were smoked, the smoking was on open fire that demands more firewood, which contributes to deforestation, another backdrop in the fight against climate change.

To avoid these problems, simple solar driers and energy efficient fish smoking kilns were developed at Kachulu and Swang’oma in Malawi. Solar fish driers ensure that fish is sun-air dried in an environment of reduced microbial contamination. Solar drying also reduces labor by eliminating the time processors usually spend guarding the fish racks against flies, dogs, birds and other predators. Improved fish smoking kilns also use over 50% less firewood than traditional methods of smoking fish. This means that people can process fish at reduced costs to their personal health (due to reduced exposure to smoke ingredients), businesses and the environment. The reduction in labor and hygienic environment ensures that women can become actively involved in both drying and smoking fish.

"I can see that the future is bright"

Ms. Kate Kaunda, a member of the Kachulu Fish Processors Group said that using solar dryers and the improved fish smoking kilns has helped her take home more income to support her family. “In the past when we were using traditional methods we used to dry fish on the open air and our business was not good. We used to buy fish worth of Mk50 000 and we got Mk5000 profit but at the moment we can buy fish at Mk50 000 and we get a profit of Mk20 000,” she says.

“I can see the benefits of using modern technology in drying the fish and processing the fish. We get the profit on all the fish species. I help my family in paying school fees to secondary school children and I also support poor people. I can see that the future is bright,” adds Ms. Kaunda.

Groups of women fish processors like the Kachulu Fish Processors Group have been trained by the program, and are involved in processing the fish using these energy efficient technologies. They are trained in hygienic handling of food products, quality control, grading, brining, and packaging of processed Matemba to conform to standards set by the Malawi Bureau of Standards. The women also receive training in business planning, pricing, marketing and group dynamics. The Ministry of Trade and Industry through the One Village One Product (OVOP), Malawi Bureau of Standards and the Department of Fisheries through the Fisheries Research Unit are some key partners involved in this effort. 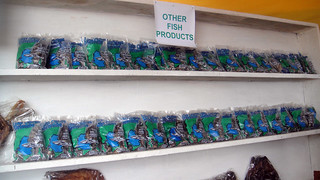 “I am planning to continue supporting orphans, start saving the profits; I am planning to open a savings account at the Malawi Savings Bank. And encourage other women to work hard and use modern technologies because they give better profits. And we sell our fish to urban markets in Blantyre, Lilongwe and Mzuzu,” says Ms. Kaunda.

The final product is packaged in well-labeled 100g packets ready for the supermarket, which adds value to the processed Matemba. Through this method, women processors realize more than 100% profits compared to processing Matemba on open air driers and selling it at roadside markets. Market research on the solar dried Matemba, found that 55% of the consumers preferred solar dried over the traditional smoked Matemba. More than 65% of those who tasted the product rated the Lake Chilwa packaged solar dried Matemba better than its imported counterpart Kapenta.

By adding value through solar drying and packaging, Malawi could benefit from the offset for Kapenta imports and save money. Lake Chilwa can also export Matemba and provide Malawi with much-needed foreign currency.

LCBCCAP is complementing government efforts to transform the country into an exporting nation, and at the same time enhances the resilience of local communities to climate change impacts. The women groups have already been linked to programs such as One Village One Product, and financial service providers for sustainable business efforts.